If you are looking for a way to change the text from "Revolution Chapters" to something else on the second page of the Revolution Design in iDVD 2008, Here are the steps I took: 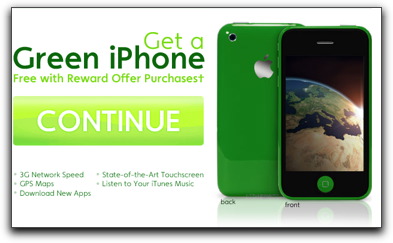 The Green iPhone doesn't exist. I got the about graphic in a Spam. I believe the concept came out of a rumor site and hasn't made it to production.

Perhaps the Apple rumor community expect that Apple to have an environmental friendly iPhone? Sorry but its not available.. yet...

How to get your Delicious Library 2 library onto your iPod Touch.

This is how delicious monster describes how to put your library on your iPod Touch:

If you have an iPod touch or iPhone, use one-click web publishing to publish specially-formatted versions of your library for viewing on your device. Now when you go to the store, your shelves go with you. iPod Sync Print your library using one of our very beautiful built-in templates, or create your own if you have mad HTML and CSS skills.

Here are the steps that I took:

I am still looking on the best way to get the library onto the iPod Touch.

If your looking for a way to convert a bunch of images to use numeric format, such as 1.jpg, 2.jpg, 3.jpg etc.. You should look at iWaterMark by Script Software.

iWatermark has lots of cool functionality, but I just discovered the renaming functionality. This is great for testing images in applications where you don't want to type in long names. Also useful for renaming lots of files downloaded from the internet.

On February 11, 2008, Apple released a patch to Mac OS X 10.5, the latest patch brings the OS X to 10.5.2. According to the release notes, this fixes many problems/functionality issues reported by users. Including issues that I have encountered with 10.5:

I am still having issues with accessing WEP access points. This first happened when I went to visit PayPal in November and wasn't able to connect to their network. It made training a little difficult, but I was able to get things done by using a cable. I don't have any problems connecting to an existing network prior to the upgrade, or to a network that doesn't require WEP authentication.

I am now having problems getting my Powerbook to sleep. The problem has to do with "The IOUSBFamily was not able to enumerate a device." I had a USB flash drive, but ejected it prior to putting it to sleep. The computer doesn't goto sleep when I close the computer lid.

Given the problem that other users are reporting, I assume that Apple will probably be releasing another patch soon. It would be great to get the Airport problem fixed.

The following are the default Character styles that I have in my Indesign install on my laptop. This is a useful list if you are looking for various BODY and HEADLINE styles for your projects.

I just notice that I have 92 items in my Application folder on my Powerbook. Wow!! That's a lot of applications to manage. Which got me thinking, is that really worth my time to navigate between all these items?

Yes, having less is more. That is: Less applications means an increase in productivity. For example, learning more about Photoshop will allow me to simplify having multiple graphic applications. Sure iWaterMark, Thumbscrew, Picturesque all do some cool things, but wouldn't it be easier to learn just one application and not have to think about which application to use.

If you are looking for a good source for Macintosh Applications, I suggest looking at iusethis.com. Signup and list your favorite applications and see what others are using. Just for fun, check out what the most popular FTP application is on the Macintosh, the answer may surprise you!

Here's a list of items in my Applications folder:

I have been using Interarchy since 2001, version 4, and my inital reaction is that this looks to be an awesome upgrade.

I really like the new look and feel, it looks like a regular Finder winder. The Path Bar is great way to navigate back, and the side bar is very similar to what Transmit is using.

I am still playing around with it, but it looks like an awesome upgrade! I would highly recomend you download a trial version.

This is a handy guide that I use as my sidenote reference to help me remember some common comands that I use in TextMate.

Some people might find it useful. Others might want to create their own reference guide. I would encourage you to design your own quick reference guide to help you learn all the techniques of Textmate.

I used OmniGraffle Professional to add the background image and header. Click on the above image to see the "Full Size" version.

One of the disadvantages of upgrading any Operating System is that some applications may have to be updated. Most of these updates are likely paid updates. This isn’t good considering that I am short on cash right now.

As far as I know there’s three applications that I have, that should be releasing a paid update fairly soon:

I am considering changing the SQLGrinder Application. As much as I like using it, it does seem to be missing lots of tools and doesn’t quiet feel like its an enterprise application. For example, its not easy to manage multiple databases like you can with Aqua Studio.

On a Macintosh, if your using JDBC connections for development, you are probably be using:

I am just learning Markdown with TextMate, and its a great way to do write blogs without having to use some complex tool. If your doing custom blogging tool and looking for an application to do clean HTML markups, I would suggest looking into implementing Markdown.

My Friday Blog tips and tricks will be based on my experiences using a Macintosh computer since 1989. I have seen the evolution of the Macintosh software and hardware, and have a good understanding of the capabilities of a Macintosh computer. I also have experience in troubleshooting and fixing problems that can occur with a Mac.

Checkout all the Macintosh blog posts.