The first Independence Day in Boston was a very special event. People were celebrating and fireworks going off all over the city. The guns were going off at Castle Island and at Fort Hill to celebrate the occasion.

At a Coffee Shop in Boston, perhaps the Green Dragon Tavern, thirteen people from various states gathered and each one shouted out a toast. Each person would have a drink and one by one they gave a special toast. 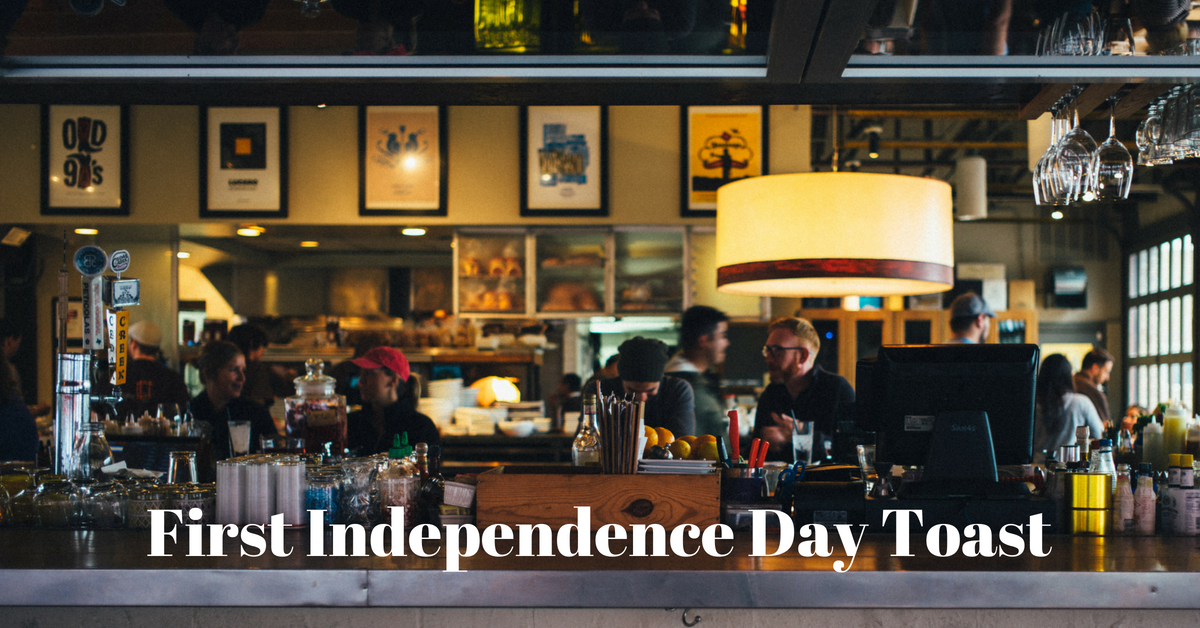 Here are the thirteen toast given at the very first Independence Day in Boston:

"Gerrymandering" is a term used to describe a political practice of drawing district boundaries in an unnatural way to favor a political party chance of winning that district.

This term came about in Massachusetts in 1812 - when the Governor created a new district to help the Republican-controlled legislature stay in power. The weird shape district looked very weird and many people thought it looked like a salamander. 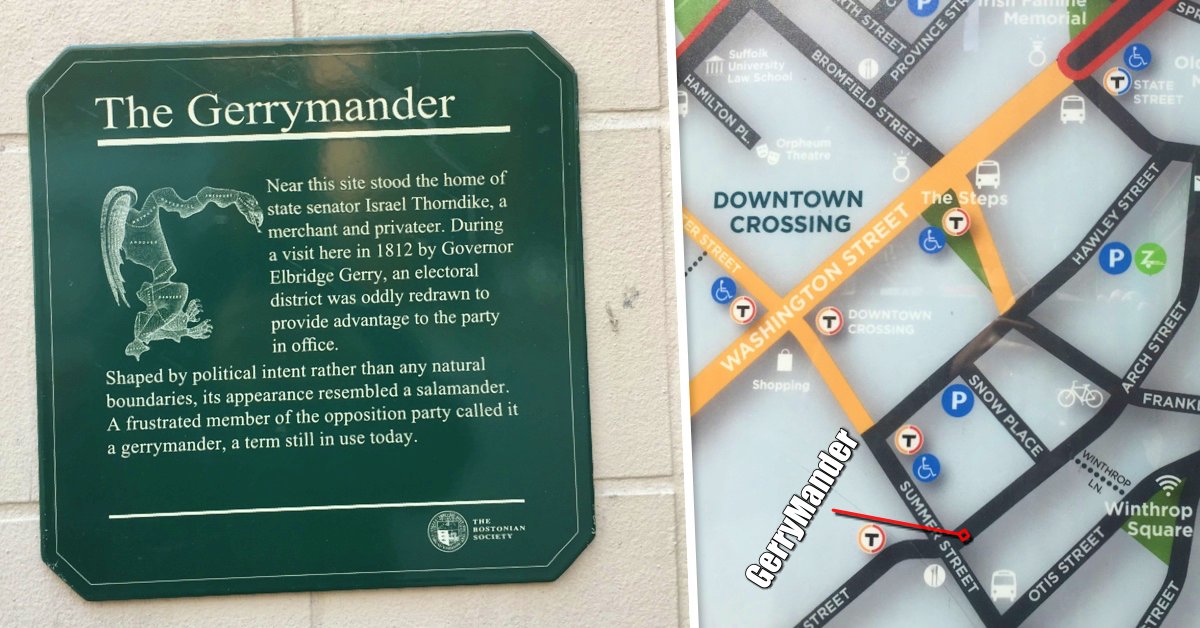 Near this site stood the home of state senator Isreal Thorndike, a merchant and privateer. During a visit here in 1812 by Governor Elbridge Gerry, an electoral district was oddly redrawn to provide an advantage to the party in office.

Shaped by political intent rather than any natural boundaries its appearance resembled a salamander. A frustrated member of the opposition party called it a gerrymander, a term still in use today.

The sign is located on a red/white building near Downtown Crossing. As you enter Arch Street from Summer Street if you look to your right you will see UDG restaurant. If you follow along the wall you will see the green sign against the white wall.

Did you know that there are various free WiFi spots around the City of Boston? Two of the most popular tourist spots are also Boston's hottest spot to do work - Boston Commons and Boston Gardens.

In 2016, The City of Boston installed free wireless access points in the Boston Public Gardens and the Public Commons. Making these a great location for laptop users to go offsite and get work done in a nice relaxed atmosphere.

The "Wicked Free Wi-Fi" map has location points to where the access points are, but just about anyplace in the Gardens/Park has Wifi access. Just make sure your laptop is charged, as there is no place to plug-in. 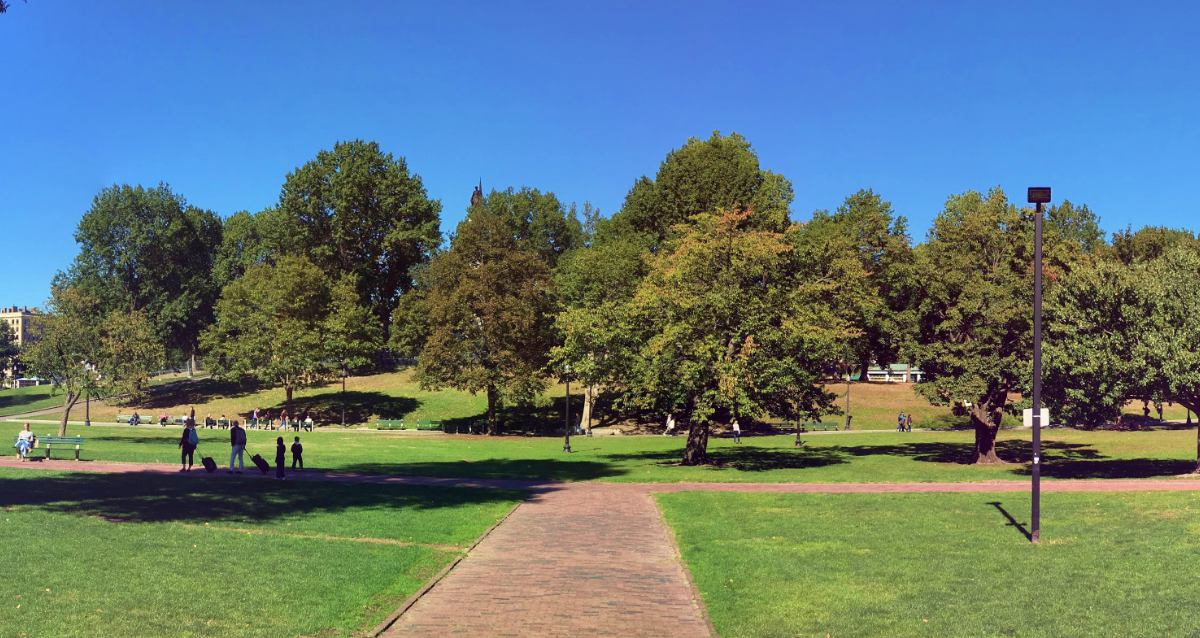 There are a couple of other Wi-Fi spots around the city that make for a great escape from the office or if the office WiFi is not working correctly. If your visiting Boston, these Wifi spots are great if you want to upload photos from your phone.

Grab a desk and get some work done at the Boston Public Library. Is it Performance Review times? Need some getaway time from all the constant interruptions? This is the place to go. Plenty of tables and comfortable places to charge up the laptop.

The Prudential Center Mall has free WiFi for shoppers and visitors. You can even get WiFi access in the courtyard - which is very convenient if you work in one of the office buildings in the complex.

Wifi is also available at the Starbucks inside the Barnes and Noble. Get a Venti drink and a snack and work away!

There were a couple of times where the Prudential Center Mall Wifi came in handy when the power went out in the office.

If you work in Boston, are there any other wifi spots worth sharing? Any places that might be inspiring to check out?

Many people have heard about the Alcott's Orchard House in Concord, Massachusetts. Did you know that the Alcott's moved around a lot? For many years the family lived in Boston.

If your walking around Beacon Hill you may encounter a sign on a house that Louisa May Alcott once lived at: 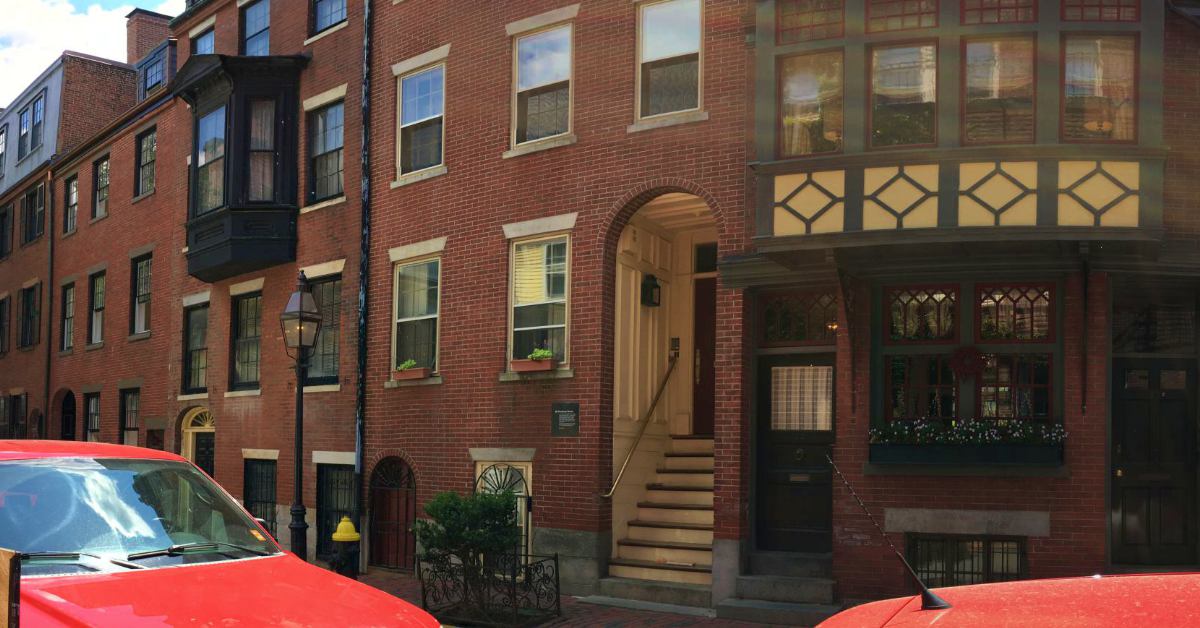 Fun Facts about the Boston House

Plaque on the Building

The plaque on the building reads:

As a little girl Louisa May Alcott lived in rented rooms at 20 Pinckney Street. The Alcott house was part of the Boston literary scene during the decades before the Civil War. Louisa's father Bronson Alcott, was an innovative educator whose friends included Ralph Waldo Emerson, William Henry Channing and William Lloyd Garrison.

In the 1800s, her reputation and fortune secure, Miss Alcott returned to Beacon Hill. She lived at 10 Louisburg Square until her death.

The house is located at 20 Pinckney St, Boston, Massachusetts. This is a private residence, there are no tours in this location.

Best Public Transportation Route: From Park Street Station, walk up to the State House, turn left on Beacon Street, and then right onto Joy Street then take your second left onto Pinckney Street. The house will be the eighth house on your left.

In Copley Square, at the Boston Public Library, is a wall of Massachusetts literary writers that have won distinguished awards in literature.

The Literary Wall concept was created as part of the major library redesigned that was completed in 2017. 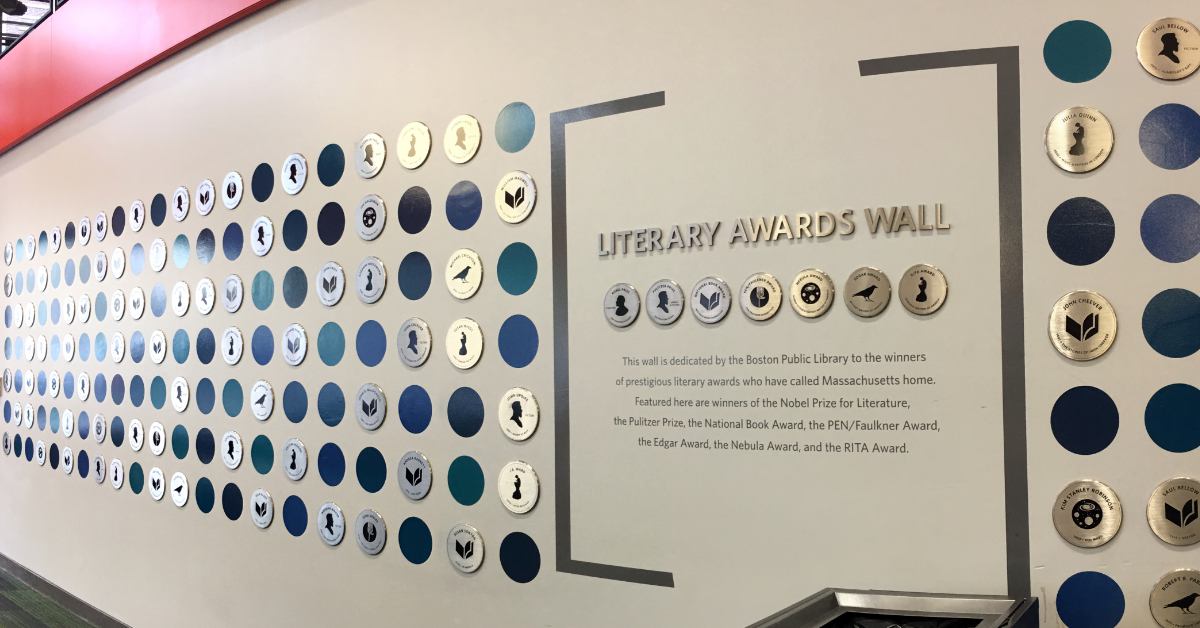 While there are many distinguished authors on the wall - Edgar Allen Poe makes several appearances. There are a number of authors that are not on the wall, simply because they haven't won any of the major awards. (At least their work existed long before the awards were ever handed out)

Finding the Wall of Literary Awards

The Wall of Literary is located on the first floor of the Main Library. It's located between the Fiction section and the Cafe.

In the Boston Public Gardens, along Charles Street, is a flagpole and several granite benches. This is a memorial to Marvin Goody. 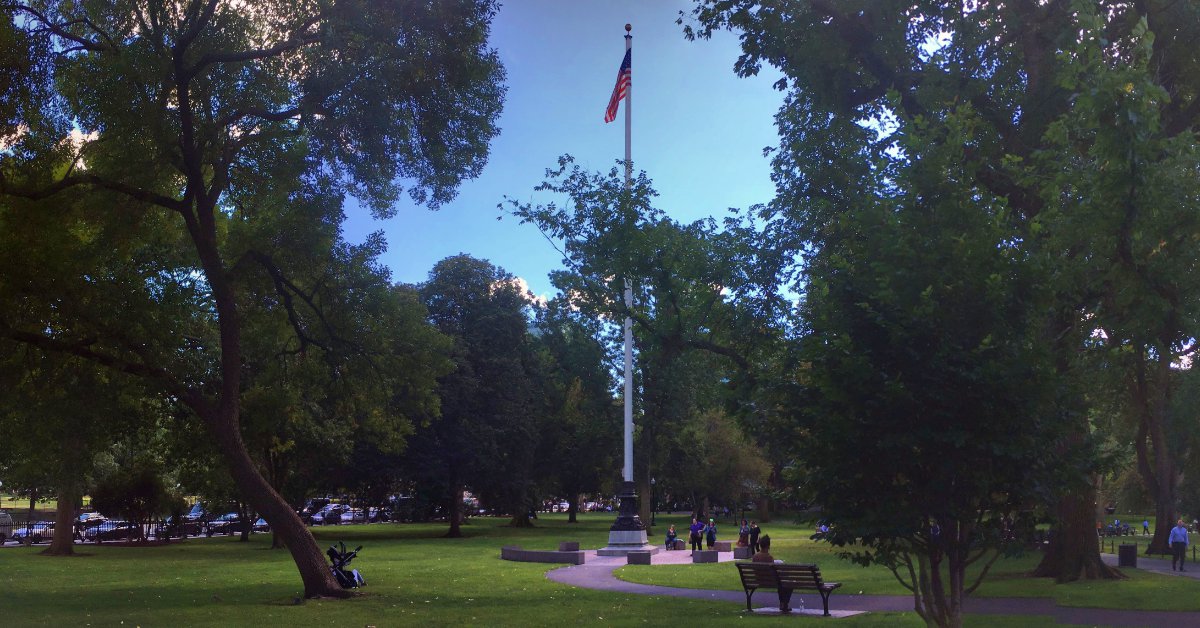 Who Was Marvin Goody?

This memorial is in honor of Marvin Goody, who was a former chairman of the Boston Art Commission and Friend of the Public Garden and Common, as well as an MIT faculty member.

Interesting Facts about this Memorial and Marvin Goody

Interesting Facts about the Flag Pole

Home of the Future

One of Marvin Goody assignment was designing the Monsanto House of the Future. This was a project that was displayed at Disneyland in the 1960s.

Watch this Disney video about the home of the future:

Boston's Chinatown is the third largest in the United States, and just as most are, there is a decorative gate at its entrance.

The Chinatown Gate was offered by the Taiwanese government to the City. The gate is engraved with two writings in Chinese: Tian Xia Wei Gong, a saying attributed to Sun Yat-sen that translates as "everything under the sky is for the people", and Li Yi Lian Chi, the four societal bonds of propriety, justice, integrity and honor. 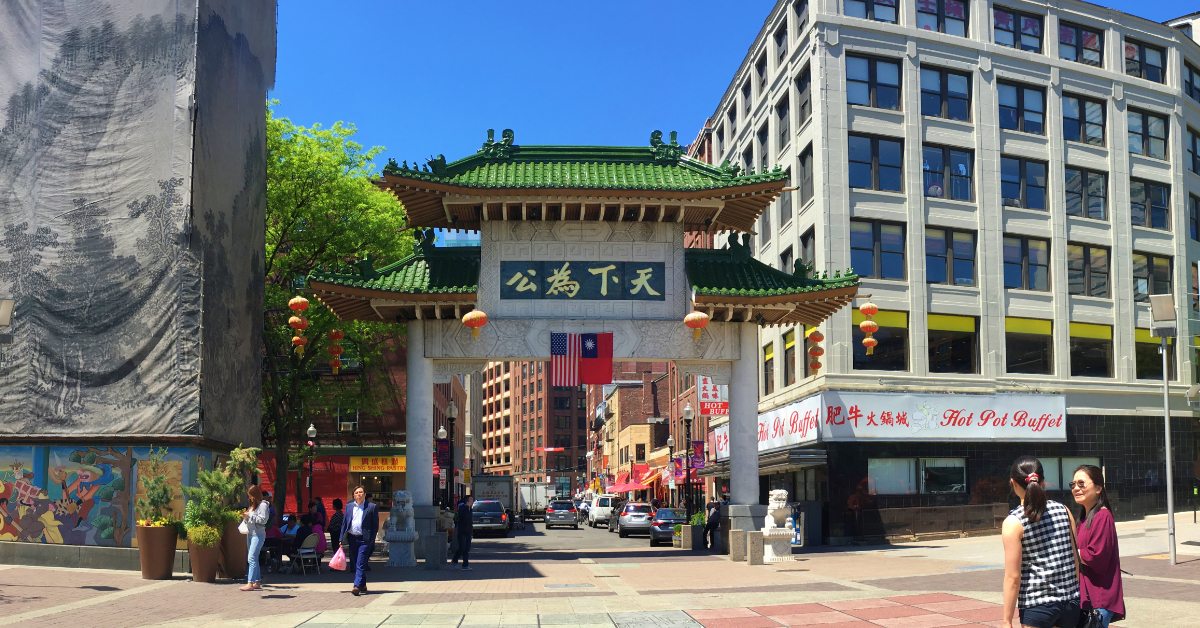 In 1974, China gave the Gate to the City of Boston as the gift for the United States Centennial Celebration.

It took seven years to figure out how to pay for the installation. In 1975, the City of Boston created the Edward Ingersoll Browne Fund to direct spending on various city art projects.

When the gate was placed, the entrance onto Beach Street was closed off from car traffic. This was to reduce the congestion from the Expressway into Chinatown. The street was re-open during the construction of the Big Dig, which caused issues with trucks knocking down the lions.

There is a lion, otherwise known as Foo Dogs, on both sides of the Arch - each weighing a ton.

The words on top of the gate mean, "A World Shared By All" - It's the same phrase that's on the Chicago Chinatown Gate and the Chinatown Gate in San Francisco. In Chicago, the translation is "The World Belongs to the Commonwealth." This was a common saying in the early 1900s.

Taipei, Capital of Taiwan, is Boston Sister city since 1996.

The Chinatown Gate installation was officially funded by the Edward Ingersoll Browne Fund.

At one time there were four Foo Dogs in front of the Chinatown gate.

During the construction of the Big Dig, sometime between 1991 and 2007, the Foo statues, were replaced with replicas.

Two of the originals were placed in a private home in Lexington. The home was owned by Paul Pedini, a former vice president of Modern Continental. The other two were placed in front of the Kowloon restaurant in Saugus.

Paul Pedini claimed that the original Foo dogs were not needed anymore and initial plans indicated that they were going to be destroyed because they were damaged. He had two of them placed in the rooftop garden of a 2.2 million dollar home he was building in Lexington.

Once public, via a Boston Herald story, the City of Boston has asked for all the Foo Dogs to be returned.

Paul Pedini returned the two statues. Kowloon has declined to return there's saying that it was a gift by the Chinatown elders.

The statues in front of the gate are still the replicas. The city hasn't decided what to do with the originals that they have. There has been some suggestion to place them in the Boston's Mount Hope Cemetery.

Getting to Chinatown Gate

Chinatown Gate is located at the intersection of Beach Street and Hudson Street. The best way to get there is to take the Red Line to South Station and walk to Beach Street.

In the Massachusetts Old State House are various exhibits where visitors can learn a lot about the City of Boston.

Royal Coat of Arms in the Council Chamber

In the Council Chamber Room, is where the Royal Governor of Massachusetts met with members of his Council. It was where key decisions were made before the American Revolution.

One artifact that people may miss is the Royal Coat of Arms above the door as you enter the room. This is a copy of the lion and unicorn heraldic crest - as it would appear in the chamber room. If you want to see an older version, walk down the stairs to the Keayne Hall. If you want to see the original one - head to New Brunswick Canada. 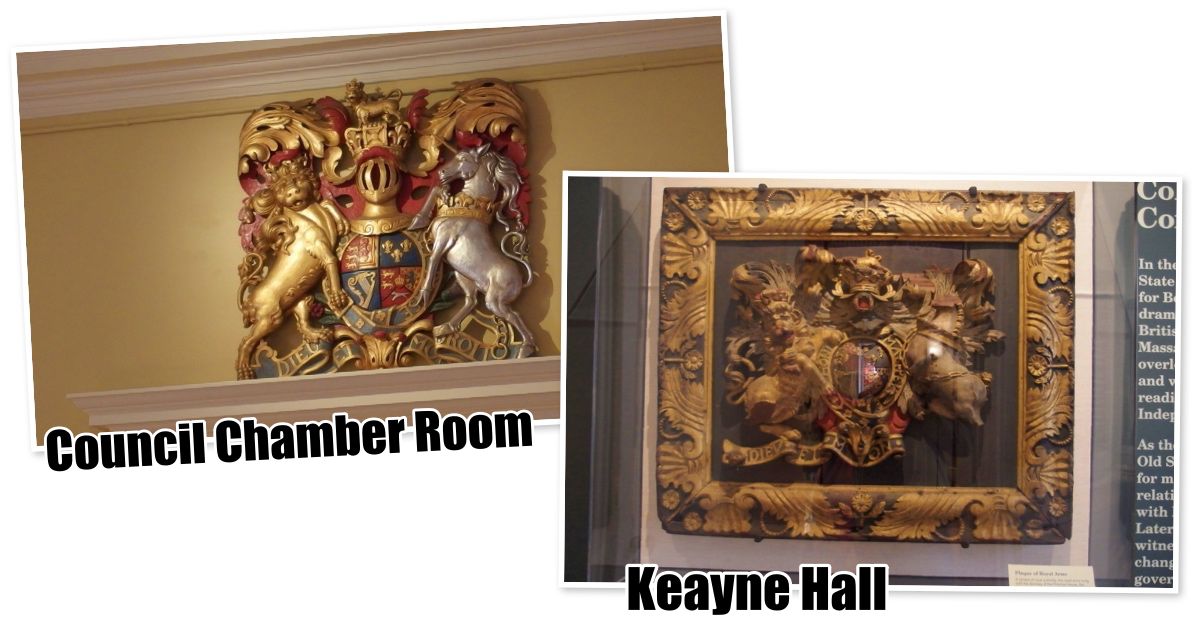 Four Fun Facts about the Royal Coat of Arms

Sign next to the Coat of Arms in the Keayne Hall

A symbol of royal authority, this royal arms hung over the doorway of the Province House, the Governor's residence. 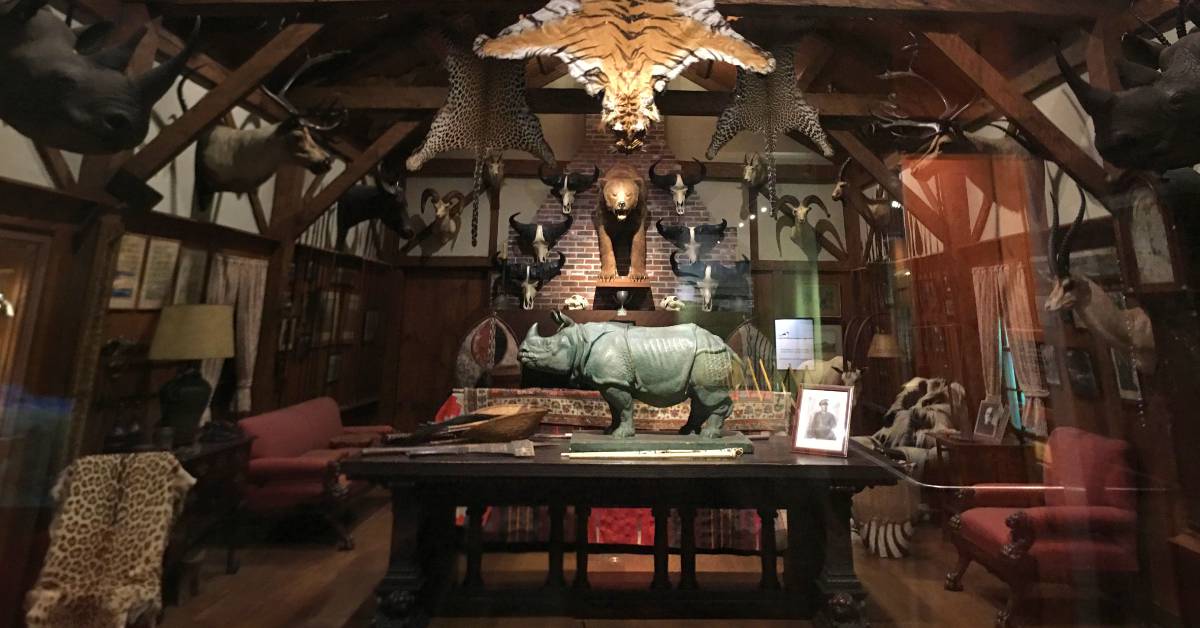 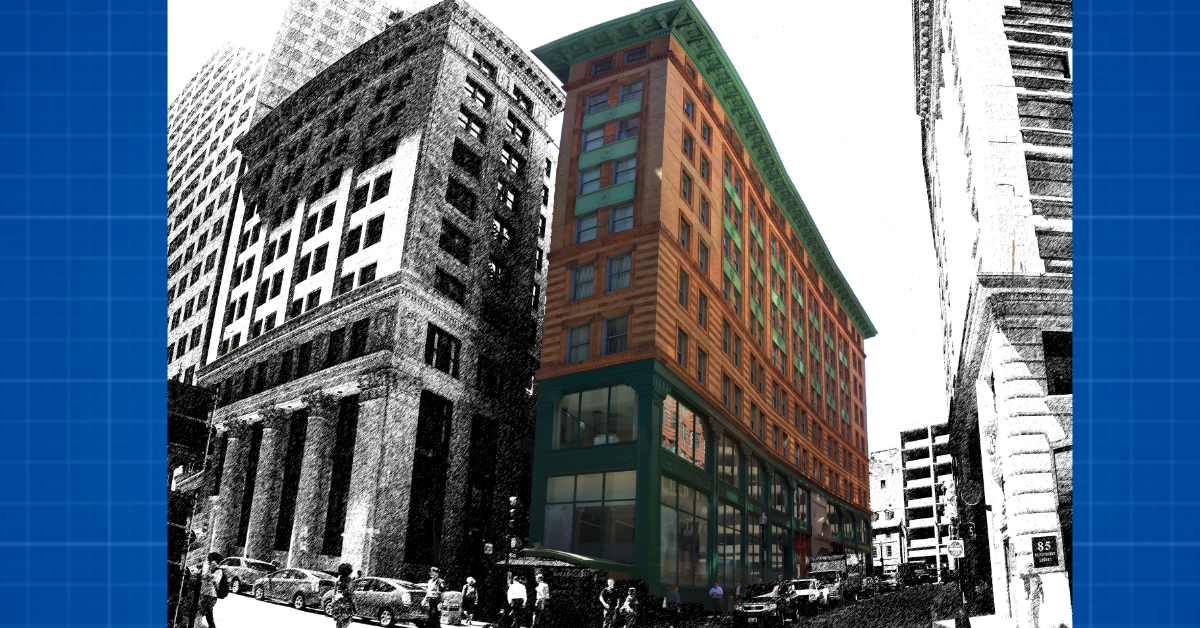 When looking at the building, look at the Terra Cotta detail on the third and fourth floors. Also look at the stained glass on the Water Street side.

One thing I notice when walking down Spring Lane - it felt like a movie studio backlot. Just the small space and the window fire exits on the building.

Built in 1893, this was the first steel frame "skyscraper" constructed in Boston. It was the work of innovated local architect Clarence Blackall, who modeled this building on the early still commercial structures of Chicago. The office building received unprecedented attention in Boston, praised for its technological achievement and also for its graceful curved design and facade of colored brick and terra cotta. Originally built for businessman C. H. Cater, the structure was renamed in 1899 to recognize the location on the site of the home of the city's first colonial governor, John Winthrop.

Location of the Building

The Winthrop-Carter building is located near downtown crossing. It's located at the corner of Water Street and Washington Street - directly across the street from the Old Corner Bookstore.