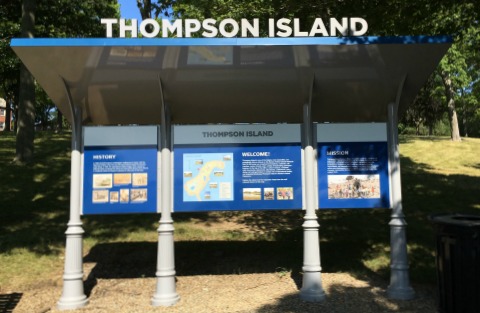 Thompson Island is one of the largest, most accessible and ecologically diverse islands in the Boston Harbor Islands National Recreation Area. The island is open to visitors on Saturdays and Sundays from Memorial Day through Labor Day; otherwise access is by arrangement only.

The only way to get to the island is to use the Charter Boats. Private boats are not allowed to dock on the island.

The Island is 157-acres on Boston Harbor.

History of the island

This is a good brief summary of the history of the island found on one of the trail signs on the island:

In 1626, David Thompson established a trading post to barter with the Neponset Indians. Over the next 200 years, farmers leased the island to graze sheep. In 1833, the educational mission began when a group of philanthropists purchased the island and open the Boston Farm school, a vocational school for Boston orphaned or otherwise at-risk boys.

Tragic History of the Island

There were two fatal boating accidents which resulted in the death of several students and faculty at the Boston Asylum and Farm School for Indigent Boys:

April 29, 1842 Boating incident. The student’s boat, called the Polka, capsized after a fishing trip to the outer harbor. 29 individuals died. (I wasn’t able to find any specific names.)

Sunday, April 10, 1892 - A similar type of boating accident, when a small gust of wind capsize the boat. According to stories at the time, everyone on the boat survived the capsized. They all held on to the boat waiting for a rescue. The wait was long and they kept talking to each other for encouragement. The rescue boat took too long and nine members died:

In 1941, Skeleton remains were found, possibly belonging to Wampanoag Indiana which lived on the island.

Most of the victims of the two boat accidents, the Indian skeleton remains are buried at the graveyard on the south side of the Island.

Things I Learned on a recent trip

How do you get on the Island?

You get to the island from a private boat shuttle at the EDIC Pier in South Boston. Boat service is only available on weekends from Memorial Day weekend through Labor Day weekend, or via private events. 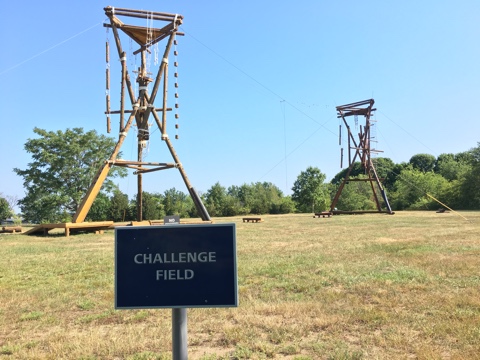 Thompson Island is an excellent place for a summer outing. They offer excellent catering services and there is plenty of room on the island for any social gathering.

Be sure to check out Challenge Field as it’s a really cool team building exercise. If you don't do it, at least walk by the Challenge field to see what your missing!

Each Thompson Island venue comes equipped with the following: