Description of the Monument

A portrait of William Ellery Channing, standing holding the Bible in his proper left hand and clutching the folds of his ecclesiastical robes to his chest with his proper right hand. The sculpture rests atop a granite base that is installed in a marble niche beneath a marble canopy. The monument is approached by two granite steps. 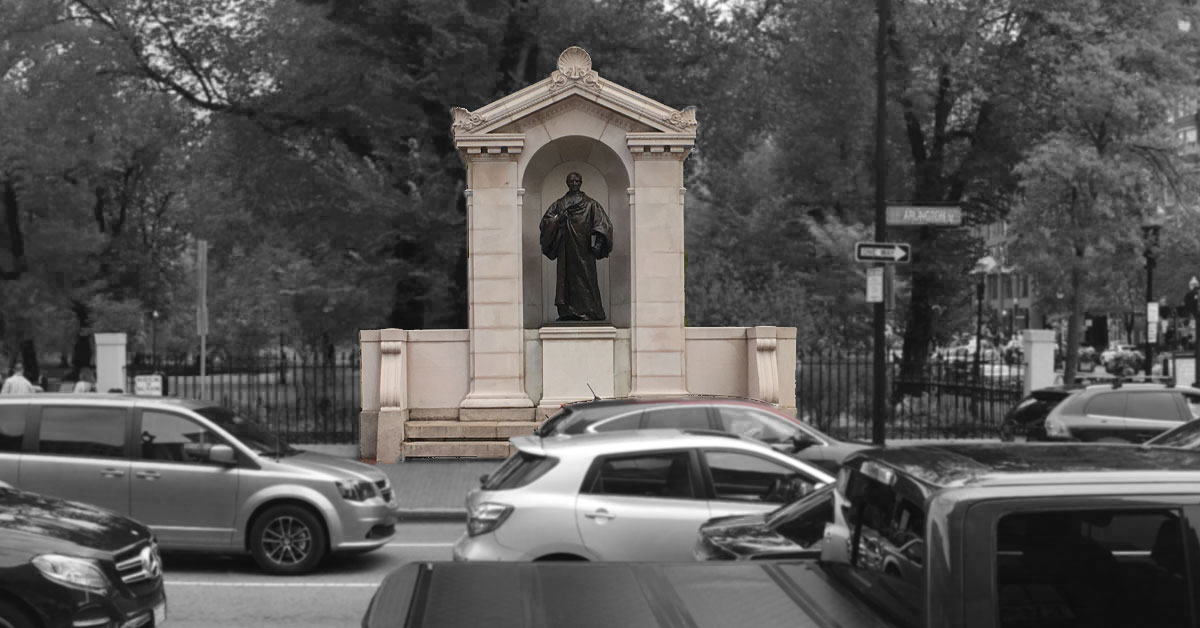 Nine things I learned about the William Ellery Channing Statue

John Foster, was a notable Boston Merchant who died on April 9, 1897. He was part of a successful wholesale grocery store - Foster & Taylor. His Will also contributed funds to the New England Historic Genealogical Society, Town of Hudson, NH, Warner, NH, Perkins Institution for the Blind, MIT and many others.

Mr. Foster directed that the William Channing statue be placed in the Garden across from the church because Channing was once pastor of the Federal Street Church, the predecessor of the Arlington Street Church.

The statue was designed by Vincent C. Griffith and created by Herbert Adams. The design was approved by Boston Art Commission.

The foundation for the statue was put in place on September 11, 1902.

Statue was dedicated on June 1st, 1903 ( 60 years and 8 months after William Channing passing ) The day was chosen because it was the 100th anniversary of the ordination an installation of Channing into the Christian ministry.

There were about a thousand people in attendance when the statue was unveiled, including William Ellery Channing Eustis the niece of William Channing.

The William Ellery Channing statue is the first statue in Boston of a clergyman. The next clergyman statue was placed only seven year later - the Phillips Brook Statue down the street at the Trinity Church.

If you walk up to the statue and look at the foot of the statue on both sides, you can see the signature of the developer - Herbert Adams

Two Inscriptions that are next to the statue

He breathed into theology a humane spirit and proclaimed a new divinity of man.

He preached with spiritual power and led a great dance toward Christian ideals.

Back Side of the Statue

Many people may not know, but on the backside of the statue, the part you can see in the Public Gardens, is the following quote:

I see the marks of God in the heavens and the earth, but how much more in a liberal intellect, in magnanimity, in unconquerable rectitude, in a philanthropy which forgives every wrong, and which never despairs of the cause of Christ and human virtue. I do and I must reverence human nature... I thank God that my own lot is bound up with that of the human race.

To get an idea of how long the statue has been there, when it was dedicated in 1903, the Boston Red Sox were on their way to a championship season by winning their first World Series over at the Huntington Grounds. Just days after the statue was dedicated, June 1903, the State of Massachusetts had begun to issue the first driver's licenses and registration plates.

If you ever been to Fenway Park, no doubt you seen the Fenway park sign on the building: 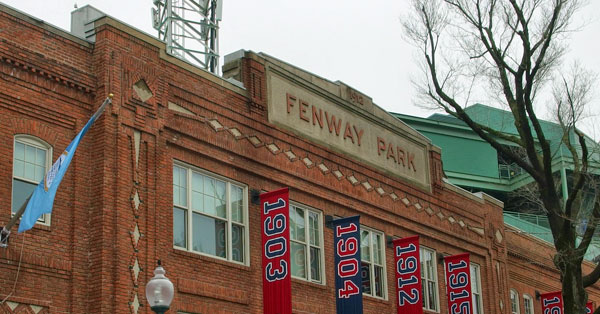 Did you know that on the otherside of the famous sign is a vegetable garden? 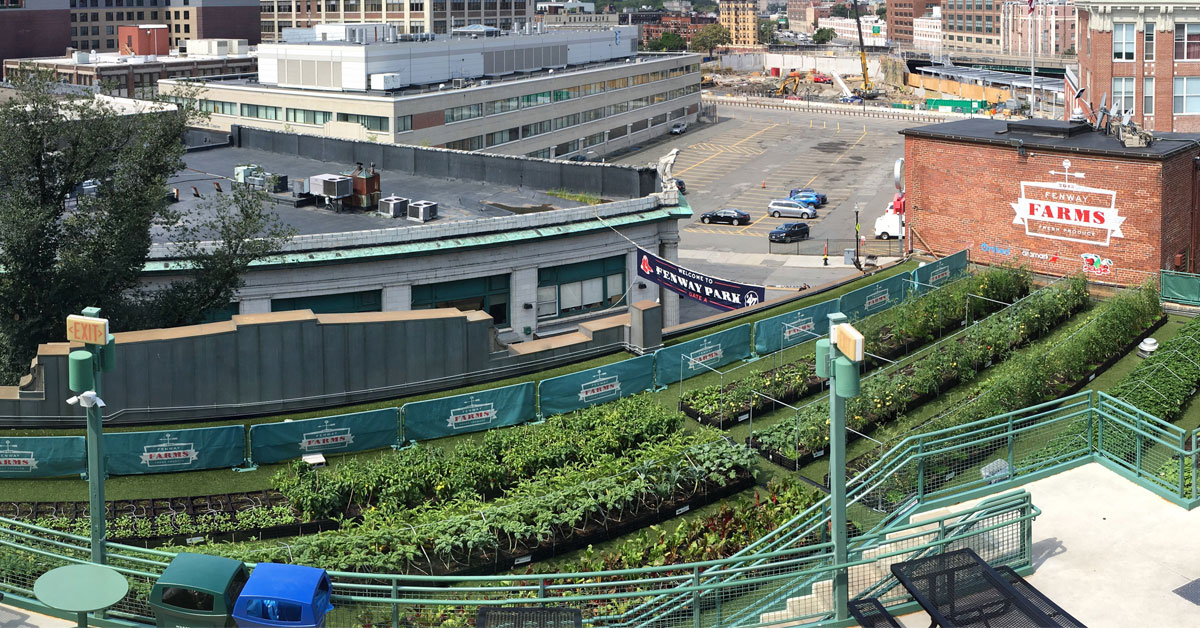 Five Things I learned about the Fenway Garden

This is a very active farm, and things get moved as quickly during the season. The exact plants that are grown are up to the farmers and the Chefs:

In the Spring you'll probably see:

You can learn more about Green City Growers and how they are changing empty spaces all over the city to practical farms.

Boston's Fenway Park has been a local photographer's favorite spot since it opened. Photographer's not only like to take pictures of the game in action, but they also like the view of the city from the stands.

Skyline Changes over the Years

When Fenway Park first opened in 1912, the tallest building was the Christian Science Center Church. In the 1960's skyscrapers went up and now you can see the Prudential and the 200 Clariton Street Building. Boston's newest skyscraper, 1 Dalton Street, is still in progress and will be open next year. 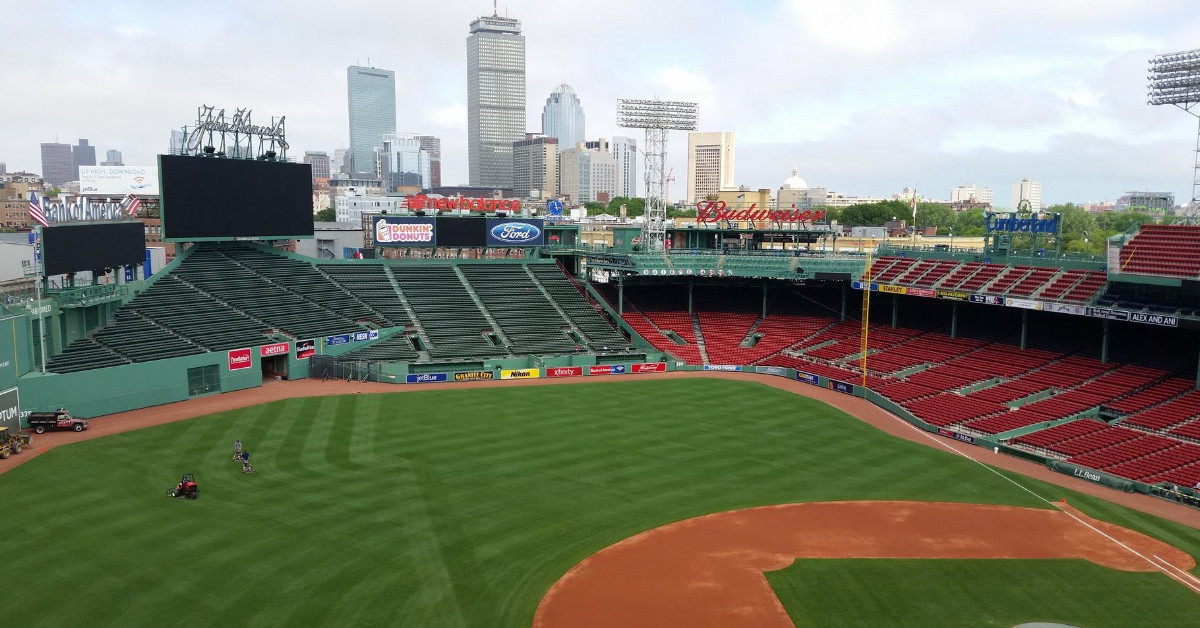 Views of Boston From a Distance

There are a many places where you can get good views of Boston. Two places to consider for photo opportunities are the Blue Hills Observatory and Thompson Island. 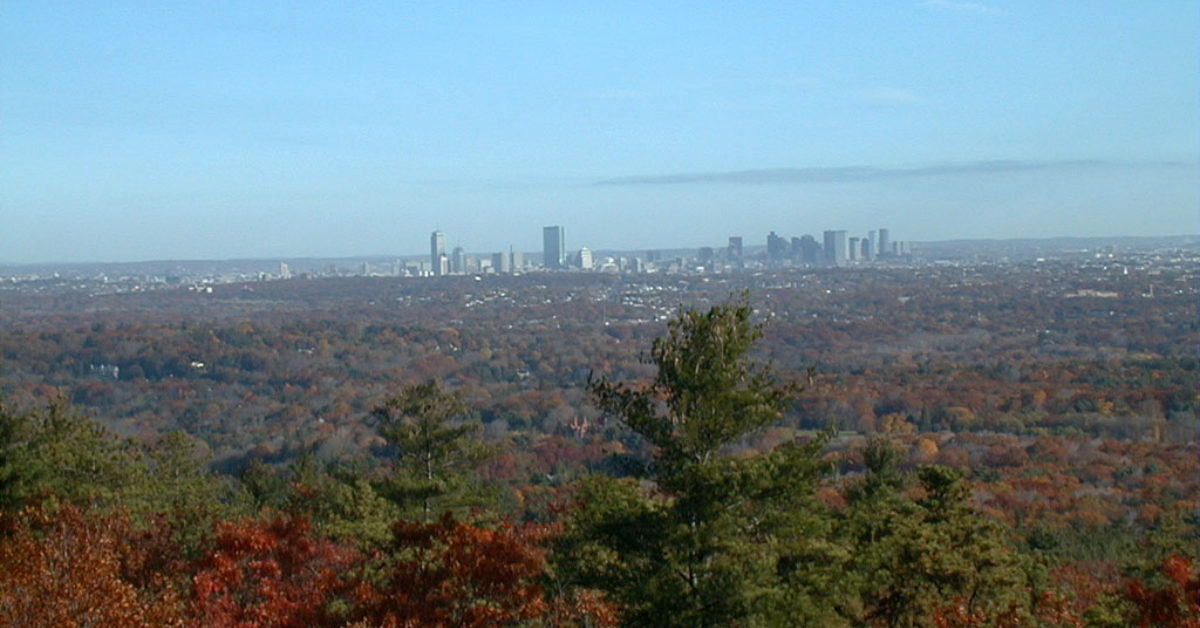 Six Things I learned About the Blue Hills Observatory 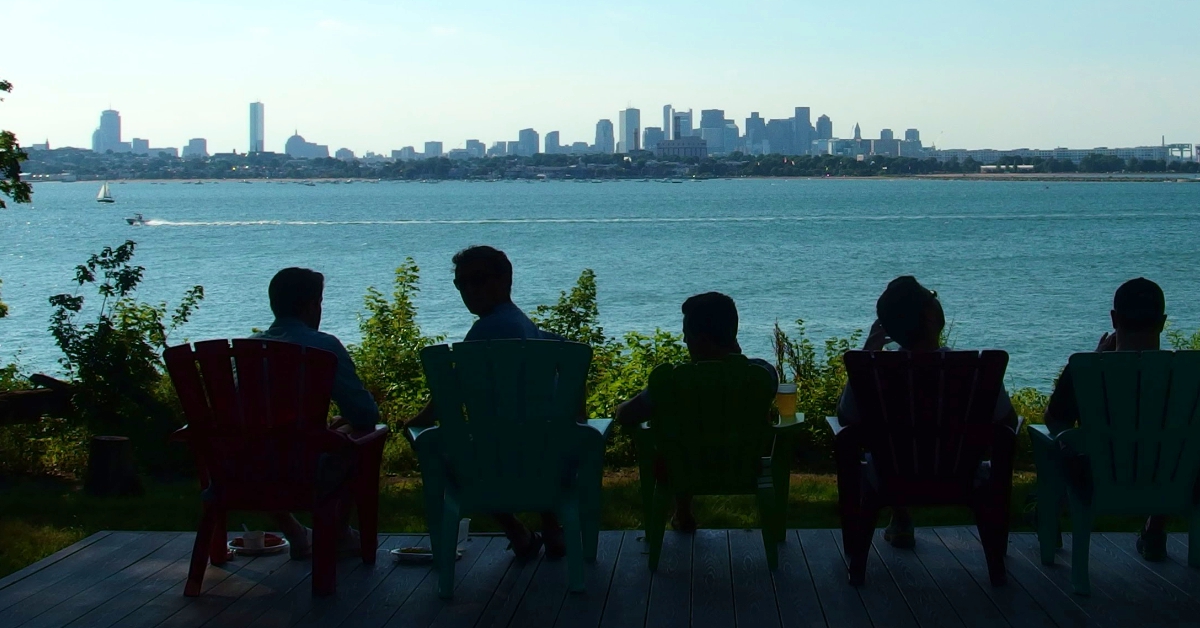 Five Things I Learned About the Thompson Island

The Boston Public Gardens and Commons are a great location for fall foliage. You don't need to head to the Berkshires to see some great colors. You can find great color right in the city. 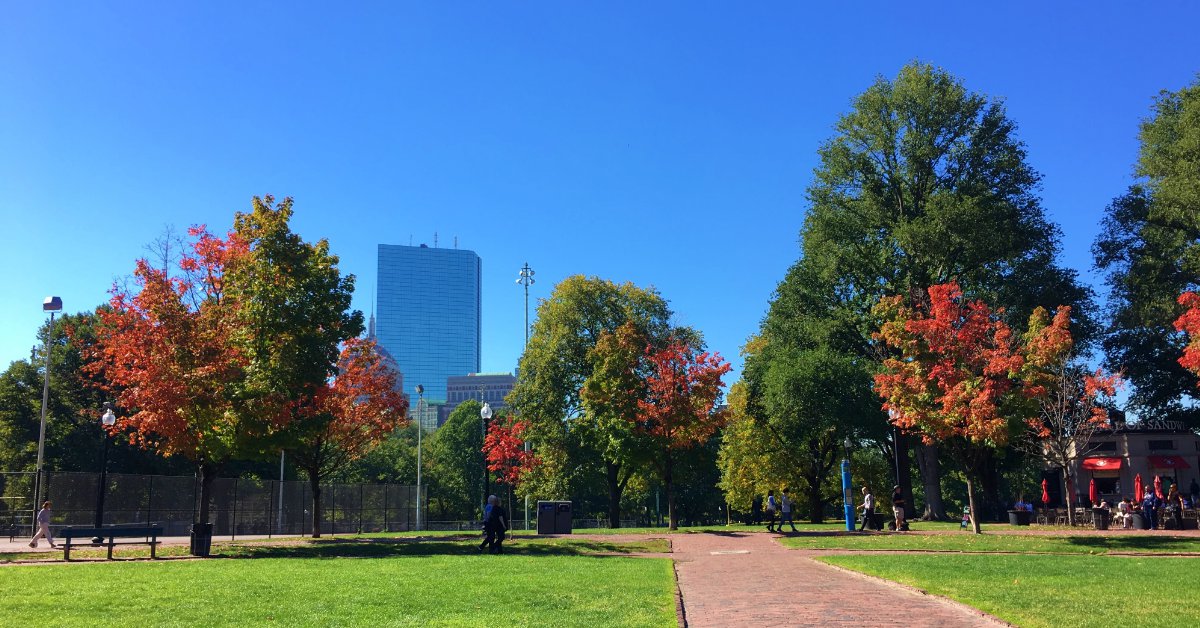 Four Tips on Taking Pictures in the Boston Public Gardens

Boston's Fan Pier is the perfect spot to get a landscape picture of Boston. Located in the Seaport District, it's a great view of the building in the Financial District - including the Custom House clock tower. 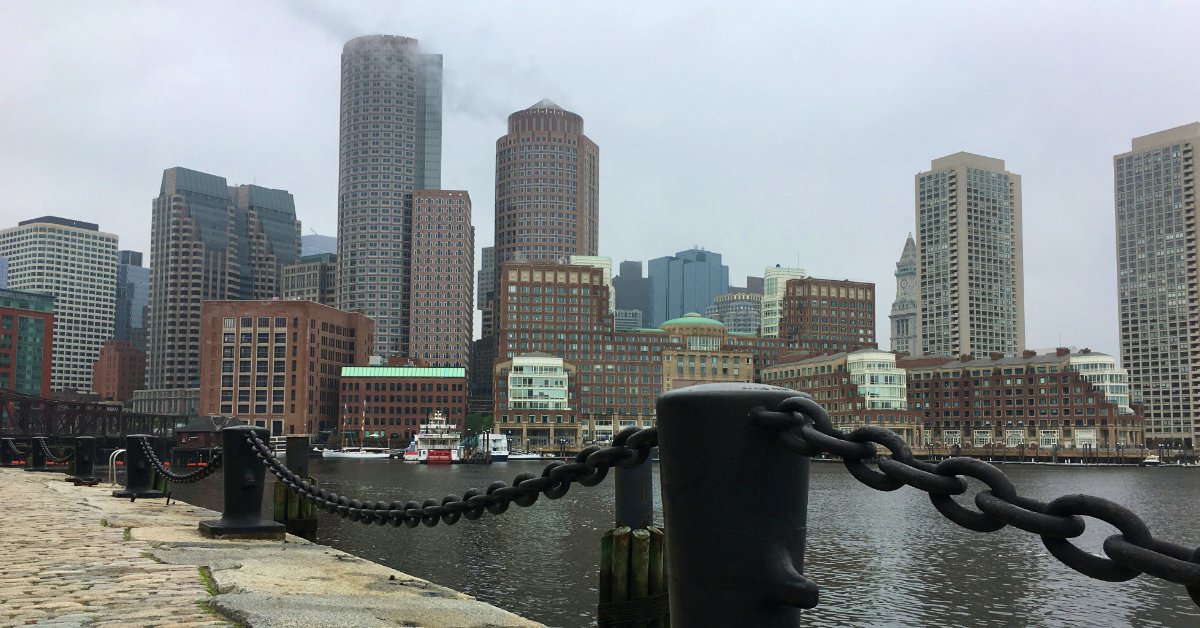 Five Things I Learned about the Fan Pier

Acorn Street is widely cited as the "most-photographed street in Boston" is the perfect street to start this month-long Boston Photographic series. All month long we'll look at where to take the best pictures of the city of Boston.

This street is famous because it is the last remaining street in Boston, to be fully lined up with cobblestones. It's also unique because it's a single lane street and has a downward slope. 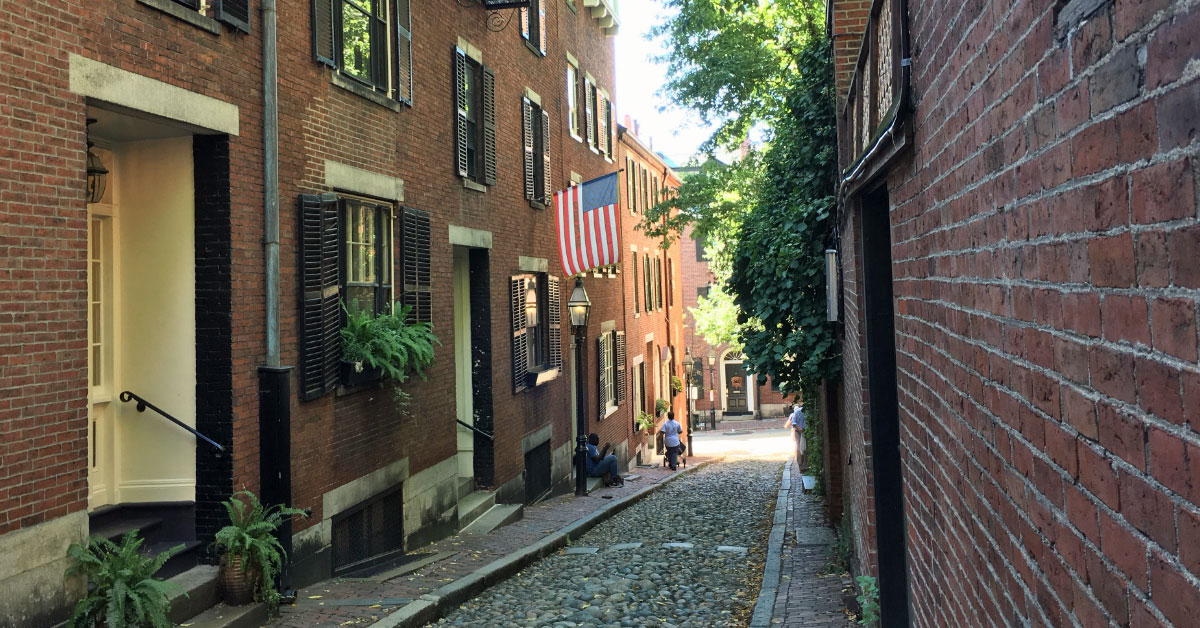 Make sure you make good use of depth of field here!

Tips on Taking the Best Pictures

This is a popular location and you'll most likely encounter other people visiting this location to take pictures. Be patient and wait for the right moment to take your prize shot.

The best time to come here is in the late afternoon as the sun starts setting.

If you have a DSLR, this is a great place to try different lenses to see how a lens can really change the view.

The Gas Lamp and American Flag is a great "colonial-type" close-up picture to take. Rarely will you see a flag near the gas lamps.

The street is not plowed during the winter, so the street doesn't have the same old time look. 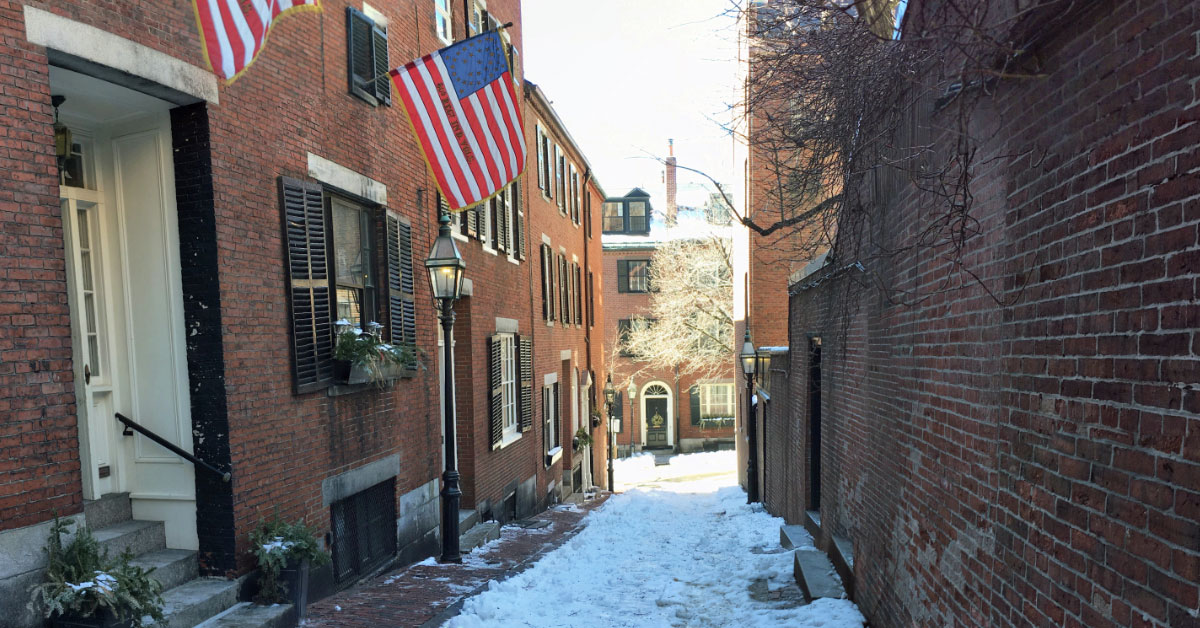 While it looks pretty in the winter, without the cobblestones it's just another street.

Acorn Street is far away from any T stop, the closest stop would be Boylston Street. It's a 10-minute walk from the train station.

You'll be at the bottom of the street, walk up the cobblestones to the top of the street for your picture perfect opportunity.

Louisburg Square is a small square located in the Beacon Hill area of Boston Massachusetts. 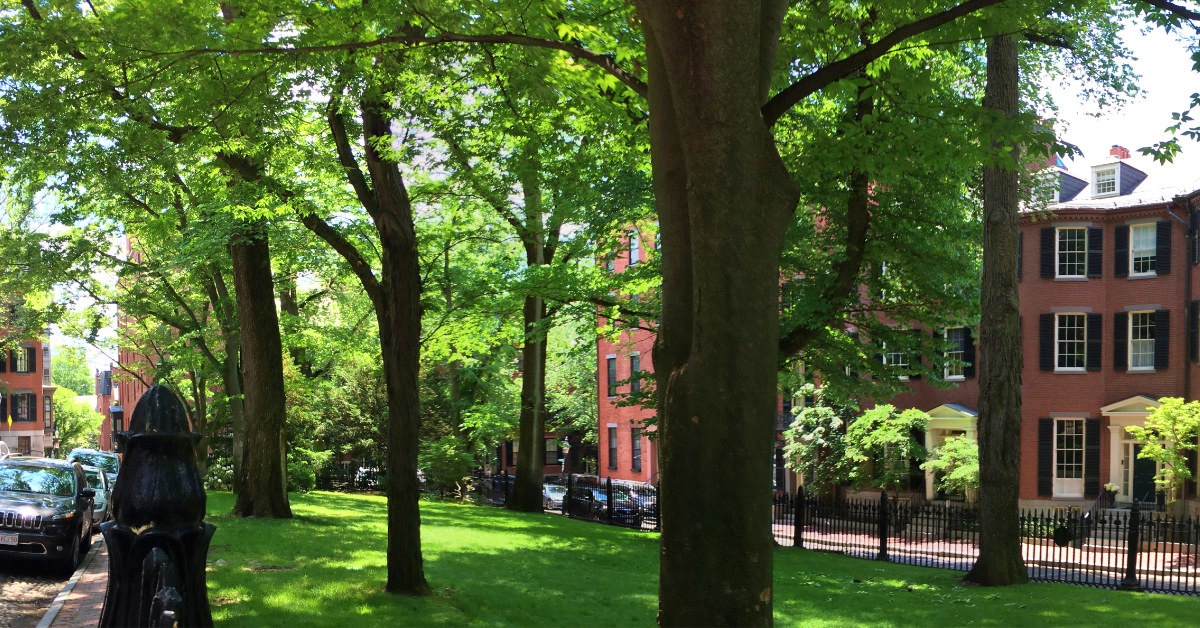 Five Interesting Houses Around in the Square

Fun Facts About the Louisburg Square

There is a gate entrance to the Boston Public Gardens. It's used to open and close the gardens after dusk. 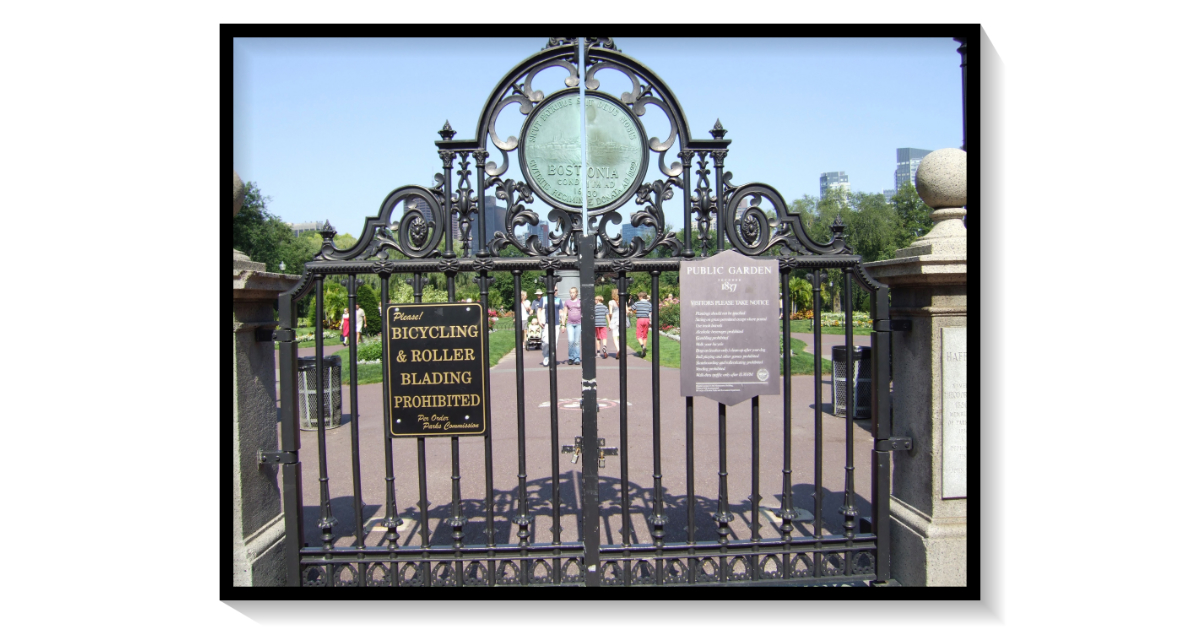 Look carefully at the Center Gate

There is a little secret to the top of the gate.

Above the gate entrance is a small oval which contains a picture what the town of Boston looked like in 1823. This is the official seal of the City of Boston 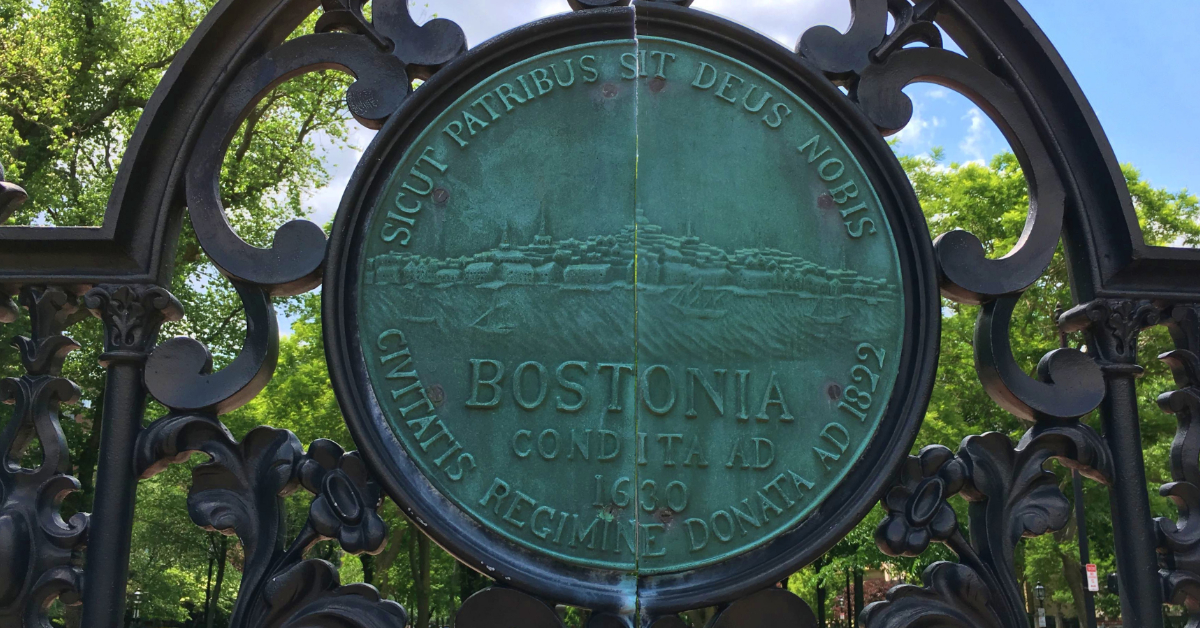 Six Fun Facts About the Seal and Gate

In case you haven't noticed, the Christian Science Center Plaza has been going through a major update. In 2018, most of the plaza has been closed. This is to help modernize the plaza and make it more welcome for people to come and visit.

Full details on the construction can be found on the Christian Science Center Plaza Construction Page. 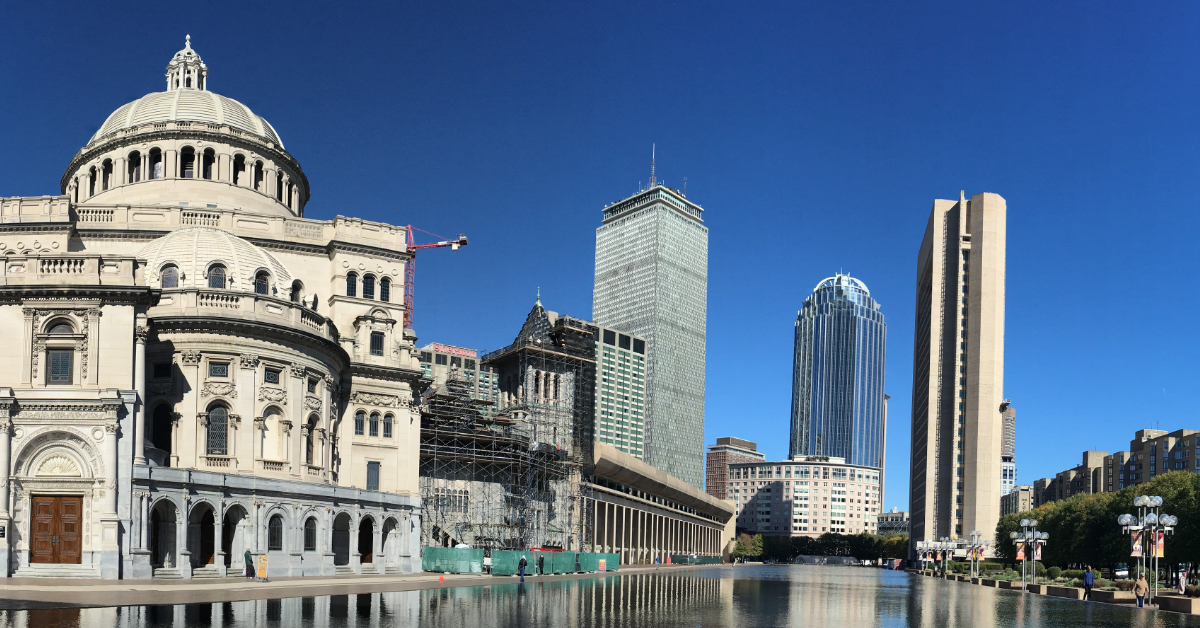 For the most part, this view will not change at the competion of the construction.

According to the Project team the project is on schedule and should be completed by this Fall.

What's Changing on the Plaza

The most noticeable change is to the reflection pool:

There is construction going on by the Massachusetts Ave side of the plaza to increase the green space in front of the church.

The popular Children's Fountain is still open and running during the final phases of the construction. There are no major changes being done in this part of the plaza

When completed, the plaza will be more picturesque any time of the year. For example: taking pictures of the Christian Science Center Plaza from the Prudential Skywalk Observatory will look much better. 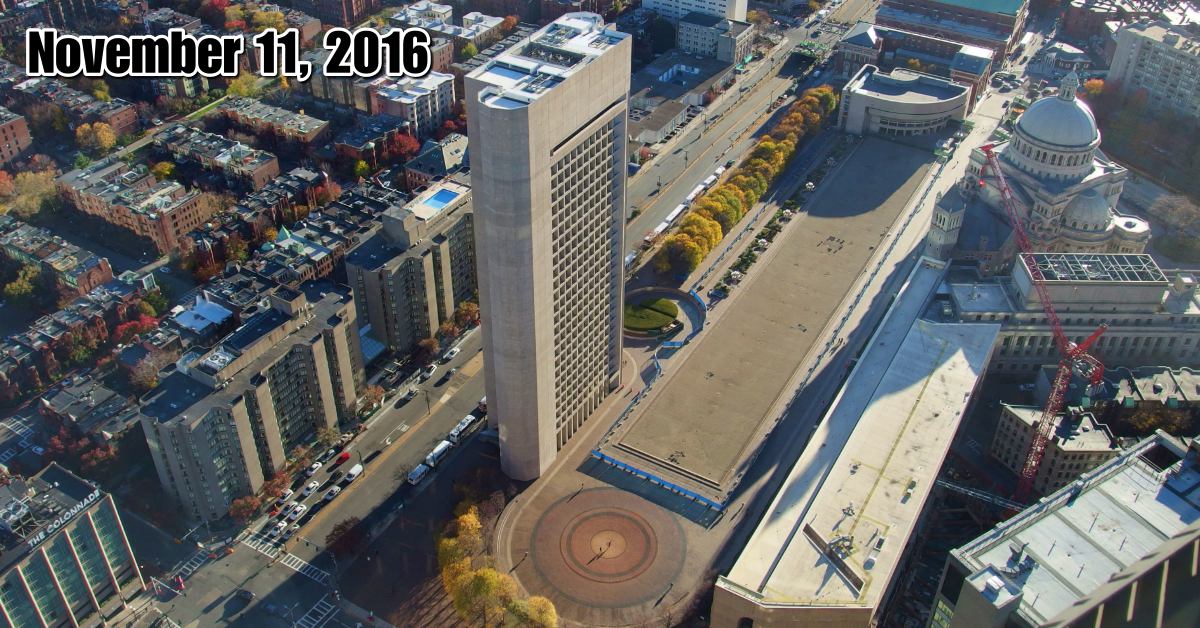