A cenotaph in the Saint Georges Cemetary

Walking around the Saint Georges Cemetary in Framingham, you may encounter the gravestone of Corporal John Ryan. His gravestone is located in the middle of the graveyard. 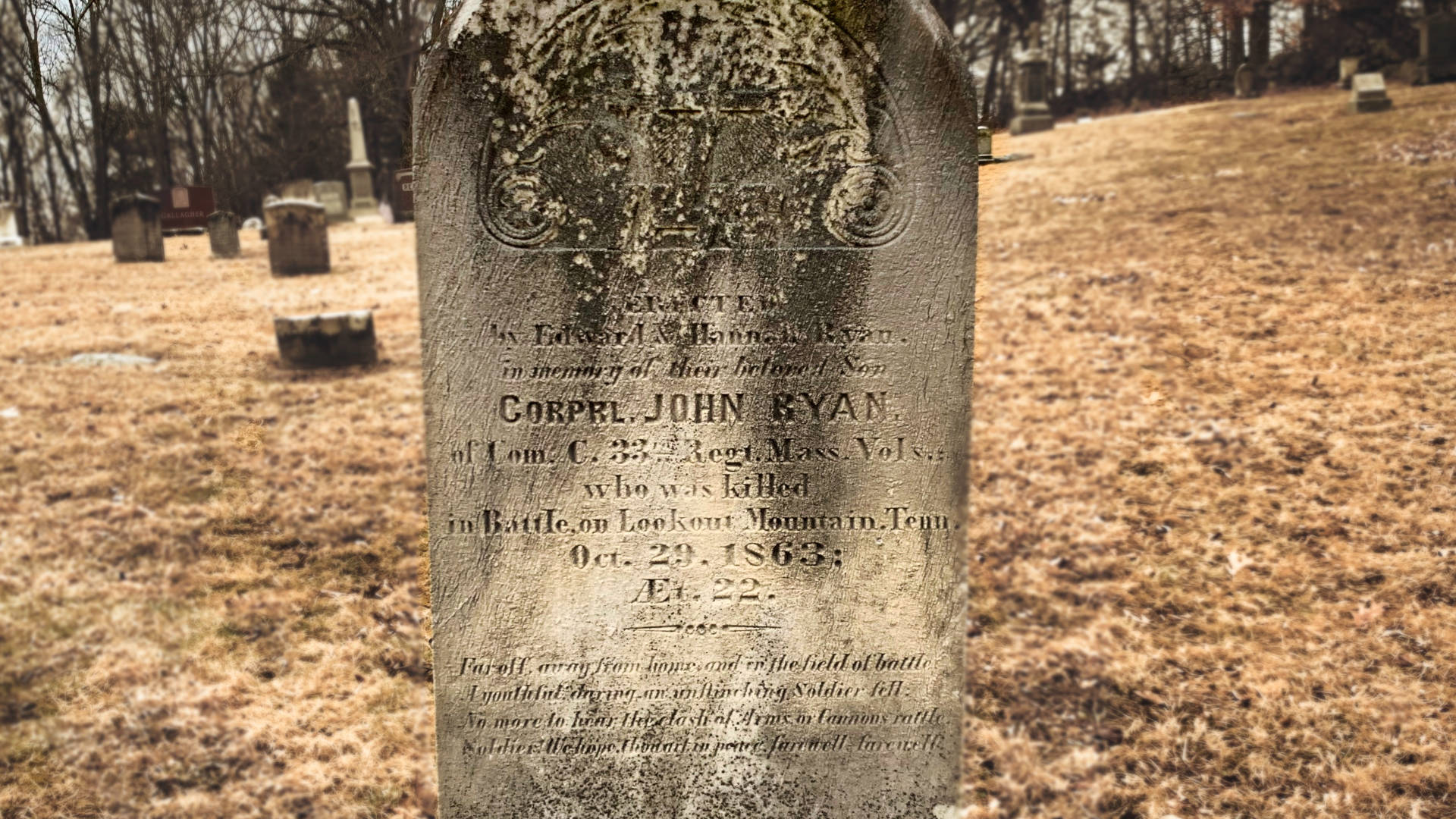 Far off, away from home, and on the field of battle/br> A youthful daring an unflinching soldier fell/br> No more to hear their clash of Arms or Cannon rattle/br> Soldiers we hope thou art in peace farewell, farewell

In August 1962, John Ryan joined the 33rd Massachusetts Volunteer Infantry to support the Union Army in the American Civil War.

John Ryan was promoted to Full Corporal on September 11, 1863.

He was killed on October 29, 1863, at Raccoon Ridge, Tenn. during the battle of Wauhatchie. Eleven other soldiers died on that day from the 33rd Massachusetts Volunteer Infantry.

The Battle of Wauhatchie was fought October 28-29, 1863, in Hamilton and Marion counties, Tennessee, and Dade County, Georgia, in the American Civil War.

The 33rd Massachusetts Volunteer Infantry lost a total of 188 men during the 3-year service; 7 officers and 104 enlisted men were killed or mortally wounded, 77 enlisted men died of disease.

During the United States Civil War only Generals, that died in battle, were returned home. Corporal. John Ryan isn't buried here. He is likely buried in the Chattanooga National Cemetery. This is marker is known as a Cenotaph (a monument to someone buried elsewhere)

There was another John Ryans that served in the 33rd Massachusetts Volunteer Infantry Company C. The other John was from Grafton and was recorded as leaving service due to disability.

The Story of Wauhatchie

Andrew J. Boies kept a journal of the 33rd Massachusetts Volunteer Infantry. This a part of his description of the events around the Battle of Wauhatchie.

About midnight we were awakened by the beating of the "long roll" and a cry made, "To arms." The enemy had attacked our pickets, and it was true a battle had commenced. It fell to the lot of the "Iron Brigade," as Hooker calls it, which was immediately ordered out, and before 1 o'clock was marching back with orders to carry and hold the ridge at all hazards. Upon their arrival it was found to be a steep declivity of nearly 200 feet, so thickly wooded and covered with underbrush as to almost render it impassable ; but it must be done before daylight, or the consequences would prove serious. To the 33d Massachusetts and 73d Ohio was assigned this perilous duty of charging up that steep mountain side and driving the enemy from the top, and how well it was done, the result will prove.

The 33d regiment had only seven companies present, the other three having gone on a secret expedition. At the word "Forward," the boys took as quick a step as the nature of the ground would permit, and slowly worked their way up the steep side of the ridge, not knowing what might be in store for them upon their arrival at the top, determined to do or die. The 33d was on the right, the 73d Ohio on the left. Arriving near the top and but a short distance from the pits, a few shots were fired by our men, when the "Rebs" commenced their old game, crying out, "Don't fire on your own men."

It being so very dark, our boys did not know but such might be the case, and the firing ceased. One of our officers inquired, "Is that the 73d?' "Yes," was the reply, "what regiment is that?" Upon being answered, "33d Massachusetts," they poured into us a terrible volley from right to left. Our men gave them shot for shot, but the loss in our regiment was fearful. Adjutant Mudge fell dead at the first fire, Col. Underwood fell, dangerously, and as we supposed, mortally, wounded.

It being impossible to advance the regiment further, in its disordered state, it fell back to the foot of the hill and quickly formed for the charge, and as they now knew what they had got to contend with on their way up, and the disposition of the occupants at the top, they started slowly and cautiously, with orders not to fire, but drive the enemy out entirely with the point of the bayonet.

Once more gaining their forfner position, they were received with a murderous fire. The men, with knapsacks on, kept pushing and climbing for the top, which was finally reached, and then commenced a scene of heroism and bravery seldom equalled in this war. Over the bank and into the pits, with the enemy, was but the work of an instant, and at it they went, charging with the bayonet, dealing each other blows over the head with the musket, slashing and cutting with swords, until the whole scene resembled a grand knock-down, our boys reaching over the pits and dragging out the "Rebs" by the collar.

This was too much for them, and they seemed amazed and confused, and finally gave way and started over the opposite side of the hill at a fast pace, our boys giving them the contents of their muskets as fast as possible, leaving the 33d in possession of the hill, about 100 prisoners, a large number of guns and all of their intrenching tools, which were speedily given into the hands of the pioneers, and in a short time we had a formidable line of pits thrown up on the other side of the ridge.

Then we had a little time to look over and see how much this gallant act had cost us in the loss of officers and men.

Out of 238 men and officers who went into action, the 33d regiment lost 87 killed, including eight commissioned officers, colonel, adjutant, two captains and four lieutenants.

The 73d Ohio did bravely and fought nobly, losing a number of good boys.