New England is predicted to have another rough winter, that is according to many weather analysis. This is because of the El Nino effect, where warmer than normal waters in the Pacific Oceans causes more moisture in the United States. This past weekend the mid-Atlantic States got a glance at what's to come.

Last year was a tough winter for New England, especially to those that rode the MBTA in the mornings. Because of various issues, there were lots of delays and cancellations.

This year I want to better record the experience and part of doing that involves taking pictures and perhaps videos. I wanted to add a weather overlay on the picture just to give a bit more understanding of the temperature. A picture may be worth 1,000 words, but sometimes the picture doesn't grasp how cold it is, especially the wind chill factor.

This past weekend I found a really cool ios application that puts the weather on any photo. Here's my tweet from this morning:

Adding the weather information on the image gives it a little zing. To get the weather overlay, I am using InstaWeather by byss mobile, they have a free version and paid version. It's the perfect tool for photo needs.

The free version is good as they have 10 unique weather overlays. When you share the image you will see an InstaWeather logo on the top right corner. You can see some of the options available in the paid version, you just need to purchase it to remove the extra overlay that they put on because you didn't pay for it.

The paid version is only $1.99, has 100 cool layouts which are sorted by 14 categories. In addition, you can turn off the logo. There is a nifty video functionality where you can take a short video with a weather overlay. One of the categories names is called 'Weather Wars' which allow you to do weather wars between two locals. Here's one I did this past weekend during the snow storm hitting the east coast: 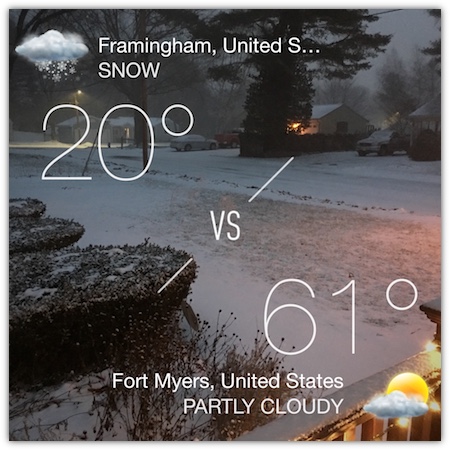 They are overlays for different seasons and InstaWeather offer all sorts of different effects including animated graphics. According to their website they are always adding more design.

The application is very popular all over the world, and byss mobile has a instaweather map website where you can see photos from other users from around the world. In order to get your photo on the map, you need to enable Photo Map option in Instagram and use the #instaweatherpro tag.

I would certainly recommend getting InstaWeather and trying it out. It's a cool way to tag weather to your photos. The paid version is a good addition to the iPhone 6s Plus library. I don't imagine that I would be using this all the time, but it seems something that would be neat to use when the extreme weather hits. It's a cool use of the Smart Phone technology, bring together the power of the photo and Internet applications.

It would be great if you could add a drop shadow or glow effect to some of the temperature numbers. In the winter time, it can be hard to see the white numbers on top of the white snow.

I would like some support landscape mode images. It would be nice to see a lot more of the landscape in the photos. 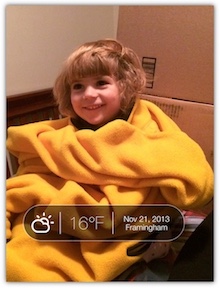 The image on the right is a photo that I took using SnapStory back in 2013 using my iPhone 5s.