In 1995, when the Internet was getting some traction, one of the ways to make your Macintosh computer a web server is to use WebStar by StarNine. This was a paid Httpd server that would allow you to share information with other computers.

What is WebStar PS?

This is from the original help file:

WebSTAR PS 2.0 is a server for Macs participating in the World Wide Web (WWW). It allows you to serve hypertext documents to other WWW users from your Macintosh. WebSTAR PS allows you to serve text documents (like HyperText Markup Language documents) as well as binary files (GIFs, JPEGs, etc.). In addition, WebSTAR PS supports the execution of AppleScripts and other applications that cooperate with WebSTAR PS and can return HTML or other data to WWW clients. This allows you to integrate applications like FileMaker Pro, AppleSearch, HyperCard, or any custom application with WebSTAR PS. This server works with all WWW clients and supports the HTTP/1.0 standard. The server places a relatively small load on your Mac, both in memory and CPU requirements. It should run fine in the background on any Mac with MacTCP installed and System 7. WebSTAR PS runs in native mode on both 680x0 and Power Macs and is distributed as a "fat binary."

Many applications have been created to work with WebSTAR PS, including tools for supporting clickable maps, free text searches, fill-in forms, and other WWW functions. Information about these tools, additional examples, product update information, and the latest versions of WebSTAR PS can always be found on the WebSTAR PS Home Page. There is also a very active mailing list dedicated to WebSTAR PS, machttp_talk. Information on subscribing to this mailing list can be found on the WebSTAR PS Home Page as well. See the Support section below for more details.

You may be familiar with the commercial StarNine product, WebSTAR, which is the successor to WebSTAR PS. WebSTAR "PS" is a shareware version of WebSTAR that's available via the Internet for a low, fixed cost to all users. It will be suitable for personal home pages and very small departmental servers.

If you want a full-featured HTTP server for the Mac that sports an enhanced user interface, administration, and performance, the commercial version of WebSTAR is for you. In addition, WebSTAR will also have a series of add-on toolkits that enhance its functionality. The Security Toolkit will add support for the SSL protocol for secure connections between Web browsers such as Netscape and WebSTAR. The Commerce Toolkit for WebSTAR will provide a framework for electronic commerce with WebSTAR. These toolkits will only be available for WebSTAR, not WebSTAR PS.

Check out this WebStar order form that I found: 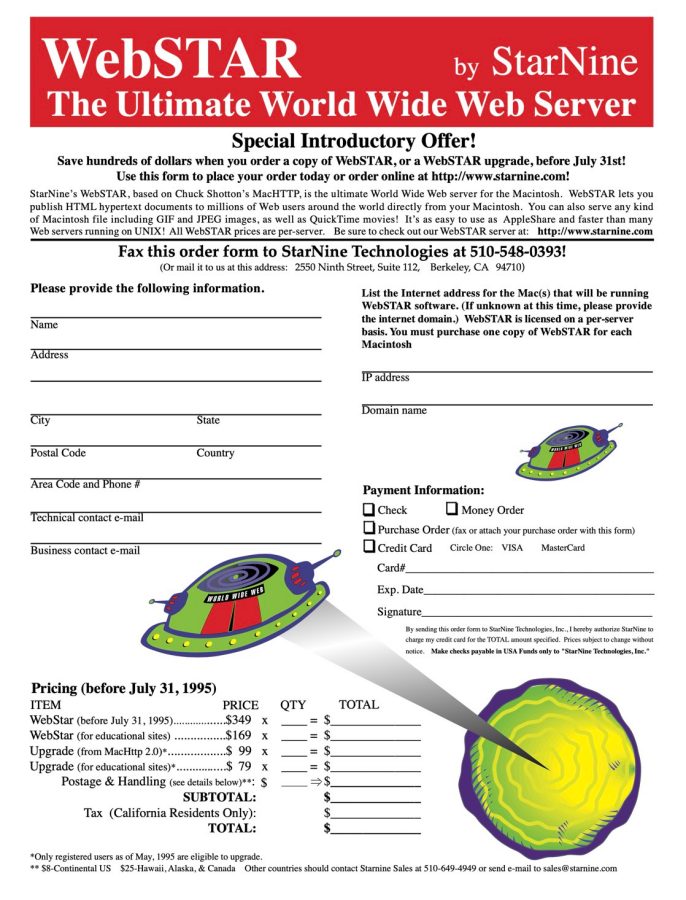 I never used WebStar PS or WebStar. I discovered the application and help files on a Macintosh WebMaster Book and companion CD by Bob LeVitus and Jeff Evans. This CD was created in May, 1995 and is an interesting look back at how things were done in the early days of the Macintosh.

Interesting history note, when this book was released the current version of Macintosh was System 7.5.

WebStart is no longer being supported - surprise...surprise...

Shortly after WebSTAR PS 2.0 was released, StarNine was acquired by Quarterdeck Office Systems. In 2000, the assets of WebStar were sold to ACT, then renamed to 4th Dimension. In 2006 4D sold WebStar to Kerio Technologies. in January 2017, GFI Software acquired Kerio.

In the WebStar promotion, StarNine used a UFO drawing. Since the product is no longer supported, I assume that the copyright for the weird 1990s logo design is also not enforced. So here you go, the World Wide Web UFO graphic: 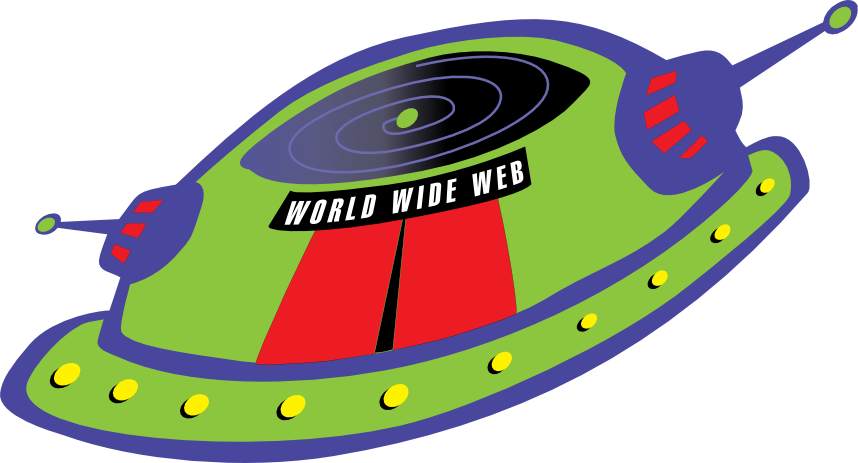 This is a PNG file with a transparent background - go crazy with it!