The Irish Famine was a period of mass starvation, disease, and emigration in Ireland between 1845 and 1852. As a result of the Famine, the country population drop 25%.

The famine was caused by mold that was growing on the potatoes. Many Irish depended on potatoes as the food source due to strict land regulations. In addition, years of oppression on the Catholic Irish caused people to live just below the poverty line.

Boston was seen as a beacon of hope, and many Irish emigrated to the Commonwealth of Massachusetts to escape the rough conditions in Ireland.

The Irish suffered job discrimination with people putting up signs in store windows which read, "Irish need no apply." People saw the mass migration as a threat to the skillful workforce.

In 1998, Boston dedicated a memorial to the Irish Famine. 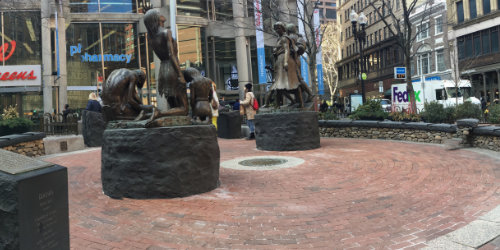 Things that I learned about the Irish Famine Memorial

What are the statues of?

There are two statue monuments in the memorial.

Some people say that the two monuments demonstrate how the potato famine impacted the poor and the rich.

There are eight plaques around the memorial which tells the cause and effect of the Irish Famine:

The memorial is located on Boston's Freedom Trail at the corner of Washington St. and School St. It's right between the "Old Corner Bookstore" and the "Old South Meeting House."

The memorial is not an official site on the Boston Freedom Trail.