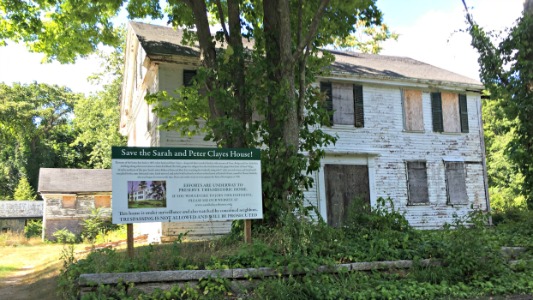 At 657 Salem End Road, in Framingham is the "Salem End" house. This ia an abandon house with history dating back more than 323 years ago.

History of the House

In 1692, it was the peak of the witch hunt in Salem, Massachusetts. Among all those being sought were three sisters who were accused of witchcraft: Sarah Towne, Rebecca Nurse, and Mary Esty. At the time it was widely believed that witchcraft was a family trait.

All were tried and evidently found guilty of witchcraft. Rebecca and Mary were hung within days of their trial. With the help of her husband Peter, Sarah escapes prison and was hidden by her family and friends until they reached Framingham, then called Danforth's farms.

Once in Framingham, Sarah changed her last name to Clayes. She lived the remaining years of her life trying to clear her sister names. She died in 1703. Sarah's grave has never been found. Framingham's oldest graveyard only has gravestones dated back to 1704. It's possible that Sarah might be buried in an unmarked grave in the cemetery.

Part of the downfall of the Witchcraft hunt was done by Deputy Governor Danforth as he was instrumental in stopping convictions by the court.

The area was name "Salem End" because of all the families who escaped the Salem Witch Trials more than 323 years ago. The families found that the area gave them peace from all the witchcraft delusion the occurred in Salem.

The house has changed hands many times over the years.

In the 1990's, the house was part of a bitter divorce and as a result, no care was taken to the house or property. The house has been officially abandoned for ten years. 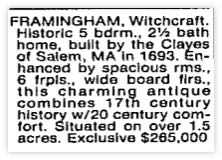 If you drive by the house today, you'll see a large sign with the following text:

Save the Sarah and Peter Clayes House!

Elements of this house date back to 1693, when Sarah and Peter Clayes -- along with their extended families with surnames of Nurse, Bridges, and Esty - built their dwellings along what is now known as Salem End Road. This little group was refugees from the witch hysteria that gripped the home of Salem Village, 30 miles northeast of this spot. Sarah's sister Rebecca Nurse and Mary Esty were hung for witchcraft, along with 17 other men and women, and Sarah herself was jailed for the same fabricated crime. Sarah survived , and settled with her family on what was then known as Danforth's Farms, named for Thomas Danforth, who was Deputy Governor at the time. These early settlers went on to incorporate the Town of Framingham in 1700.

Efforts are underway to Preserve this historic home. If you would like to join this Initiative, please see our website at www.sarahclayeshouse.org

This home is under serveillance and also watched by concerned neighbors. Trespassing is not allowed and will be prosecuted.

An onsite Auction was held on Oct 23, 2015, where the current owner, Goldman Sachs, had pledged to donate the house to a non-profit who would restore the house. They would only pledge if no one else wanted the house.

In December of 2015, Goldman Sachs made good on its promise and donated the house to the Sarah Clayes House Trust.

The Land Conservation Advocacy Trust is now working to raise money to help restore the house, you can visit their Go Fund Me campaign to contribute to saving the house. They are looking for tax-deductible contributions to raising the first $10,000 need to help save the house.

The Go Fund Me campaign has lots of information about the history of the house and the what the Trust plans to do with the house.