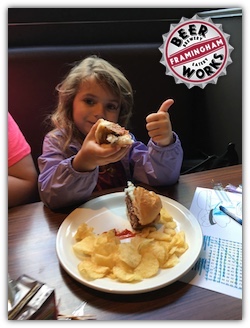 This past weekend we stopped at Framingham Beer Works for a nice dinner. The restaurant was fairly quiet because it was Independence Day weekend. We didn't have to wait for our table when we arrived.

We asked for a menu that had gluten free options, the door hostess informed that just about anything on the menu could be made gluten free.

When we placed our order we mentioned that our daughter needed to eat gluten free. The waitress was very helpful in letting us know what are options are.

My daughter was really hungry and we wanted to order an appetizer. We thought that the corn nachos would be good option, but were told that we couldn't order it because the nachos are fried and there could be cross contamination issues.

It was nice to hear a waitress say "cross contamination" clearly they understand allergy concerns. We were impressed with that.

We asked if they had any gluten free pasta since my daughter loves mac and cheese. We were told that they didn't have any. Which was a bit surprising since they told us that just about anything on the menu could be made gluten free.

My daughter got a cheeseburger and asked for chips. We didn't get a chance to ask if they had a dedicated fryer for french fries.

The food was very good and I asked my daughter how her dinner was and she said yummy. She would give it two thumbs up but had the hamburger on the other hand. The kids burger was $6.50, which was reasonably priced.

We would certainly be going back again. I think Smash Burger makes better burger, but at least she can go to a nice restaurant when we have company.