This past weekend we saw Annie at the Boch Center (Wang Center). After the show we headed over to Maggiano's for an early dinner.

Since we arrived after a sold out show the restaurant was very busy. In addition, there were several nearby graduation ceremonies. We planned ahead and had reservations. However, we still had to wait 20 minutes before sitting down at our table.

Some Things I Learned While Waiting

Service Was a Bit Weird

While the food was great, We did have a problem with our waiter. While we were waiting for our order, my daughter was getting hungry. There was bread on the table, but it wasn't gluten free. The waiter told us that the didn't have any gluten-free bread.

We asked if their soup was gluten free, he seemed a bit unsure. We then asked if he could get cucumbers for her as an appetizer, he then told us that he was "too busy to get the cucumbers."

We were shocked that he would say that and asked to see the manager. We were afraid that this would turn into the experience that we had last year at the Cheese Cake Factory.

Thankfully the management did step up and made our experience enjoyable. They were out of the way to make sure that the table service was very good.

When we placed our order, we did request the kid's meal to be served the same time as the appetizers. Turns out that less than 30 seconds later that the meal arrived at our table. The original server, who had no time, could have simply checked on the status of the meals.

My daughter order the Fettuccine Alfredo with gluten free pasta, basically fancy Mac & Cheese. She loved the meal and ate most of it. There wasn't enough leftover to take home, which she usually does.

For desert, she had Vanilla Bean Ice Cream with some chocolate sauce. It was excellent! 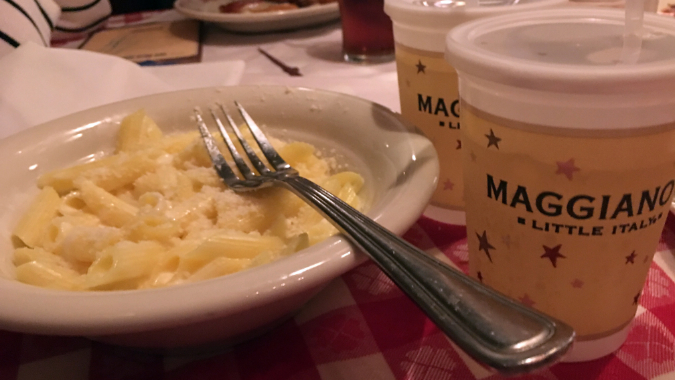 Will we go Back?

Yes! Despite the initial poor quality of service. We will certainly go back. We did enjoy the food and had a good time after watching Annie.

Getting to Maggiano's Little Italy

The restaurant is located about 3 blocks from the Boch Center - Wang Theatre.

If you are going to a show, make the reservations at least 30 minutes after the show ends. That will give you time to leave and walk over to the restaurant.