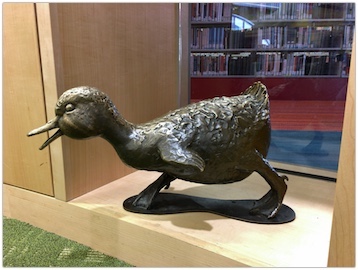 A few months ago I wrote about some information about the "Make Way for Ducklings" statue in the Boston Public Gardens. One of the facts I mentioned was that 2 of the ducklings that were stolen were never returned. I learned this week that one of them did get returned.

In the Children's section of the Boston Public Library Central Branch is "Quack", one of the missing ducks.

After finding Quack, sit down and read the "Make Way for Ducklings" story. It's a lot easier to do it at the library than in the Public Gardens.

There is a little wall sign near the duck statue about the lone duck:

Quack was among eight ducklings and a mother mallard sculpted and cast for the Boston Public Garden by artist Nancy Schon in 1987. The bronze feathered family, one of Boston's most famous public art installations, pay homage to Robert McCloskey's famous children's book Make Way for Ducklings (1941). In the much-loved story, the ducks find their way to a new home on an island in the Public Garden's Lagoon. McCloskey (1914-2003) brought six ducklings to live with him in his New York studio while he was illustrating the tale; he webbed roommates modeled for a series of preparatory sketches that now reside in the Boston Public Library print collection.

Not long after the Public Garden statues were installed, young Quack (the last in the line of ducklings) went missing. Schon cast a duplicate sculpture to replace the figure. In 1988, Quack came back and soon make its way to the Boston Public Library's Children's Library, where it has become a beloved resident. 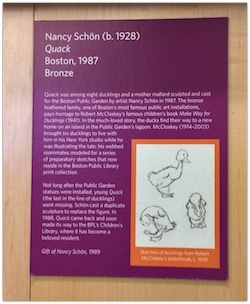 Maybe someday Quack will get united with the rest of the family. Here's a link to the original "Make Way for Ducklings" blog post.

The original Mack statue is still missing! Bring Mack Back!