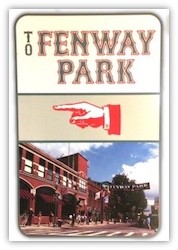 Here are some notes of things that make Fenway Park in Boston Massachusetts, a special place to visit.

Teddy Ballgame's Seat - In Seat 21 in row 37 of section 42 of the bleachers marks the spot where, in 1946, Ted Williams knocked the longest in-park home run in the park's history. The ball ended up landing in and ruining the straw hat of Joe Boucher, a Yankee fan. The seat where Joe Boucher sat was 502 feet from home plate. The red seat back was installed in 1984 by then Red Sox owner Haywood Sullivan.

Morse Code - Two of the scoreboard's vertical lines contain the initials TAY and JRY -- for Tom Yawkey and Jean Yawkey -- appear in Morse code in two vertical stripes on the scoreboard.

Pesky's Pole - Just one of many examples of Fenway's uniqueness is the right field foul pole, which is placed closer than in most big-league stadiums at 302 feet. It was officially designated Pesky's pole on September 27, 2006, which was Pesky's 87th birthday. There is a commemorative plaque at the base of the pole.

Manually Operated Scoreboard - The only one left in the Majors, the game's score is kept by two operators who sit inside the Green Monster and monitor the game by radio. The numbers used on scoreboard are 13-by-16 inch plates that are at about 2 pounds.

The Monster's Ladder - There is a ladder 13 feet up the wall in left center. In the past, it was used by groundskeepers to fetch balls hit into the net over the giant green wall. But now with the four new rows of seats on top of the Green Monster, its function is obsolete. If a ball should hit the ladder the ball is in play, there has been three known inside the park home runs as a result of hitting the Monster Ladder. 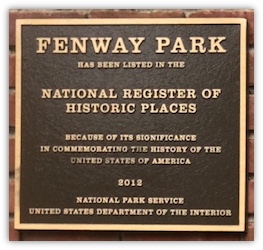 Day Game Seats - During daylight games Bleacher section 34 and 35 are blocked off to provide a solid batter's eye backdrop for the hitters.

TV Seats - If you're looking for the seats that get you on Television during a game, you'll want to sit in section Field Box 35 rows 4 and 5. There is a Field Box Usher that will check your tickets to prevent people from seat squatting in this area. In addition, the camera tends to catch people sitting over Field Box 58 and 57.

No matter where you sit if you can see the field, the ball can get to you. Just remember to be alert at all times during gameplay.

Obstructed View Seats - Being one of the oldest parks in baseball does have one drawback, obstructed view seats. These are the worst seat locations in Fenway Park. You won't be able to see the batter or the pitcher.

Sound of Music - Music is a big part of the game at Fenway Park. Immediately after a volunteer yells out "Play Ball" the song "Play Ball" by J. Bristol is played through the park. During the game, the Red Sox hitters get to pick the music as they walk to the batter's box.

When the Red Sox win, the following songs are played throughout the stadium: "Tessie" by the Dropkick Murphys, "Dirty Water" by The Standells and "Joy to the World" by Three Dog Night. 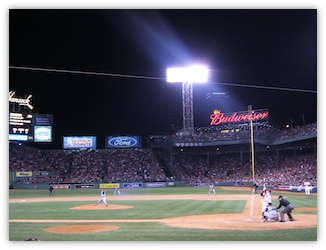 Support the Outside Vendors - Since the 1990's the Boston City Council has been slowly phasing out the cart vendors around Fenway Park. The vendors will be allowed to continue to operate until they die or retire, but their operating permits will not be allowed to pass on to anyone else.

Currently there are 16 outside vendors around the park. Once they leave, only Aramark will be the sole vendor around Fenway Park.

Personally I like getting the Peanuts from Nicholas "Nicky" Jacobs who sells them at their family cart by the Gate A. The family has been selling peanuts at the same spot since 1912.

Fenway First Timer Perks: If you have never been to Fenway Park before make sure that you stop into one of the Fan Services booths -- located at Gate E, Gate D, and Gate B -- to receive your "First Timers" fan items.

When they check your ticket, simply ask the directions to get your Fenway First Timer Perk!

If you like this post, check out my post about the location ofHuntington Avenue Grounds, it's the ballpark the Red Sox used before going to Fenway Park.