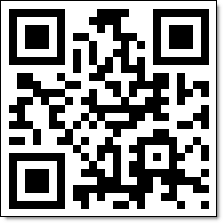 QR codes are becoming more and more popular, you see them just about everywhere. QA Codes is short for Quick Response Codes. QR Code symbol is a 2D barcode that can be scanned by handy terminals such as a mobile phone with CCD. The capacity of QR Code is up to 7000 digits or 4000 characters, and has high robustness.

The most popular QR Code app on iOS is QR Scanner.

People scan the code using the camera on their smartphone and the app takes some action based on the QR code data:

QR Codes only reads data and doesn't transmit any activity or device data. For example, a QR code won't cause an instant sale, it will only bring you to a sales page where customers can enter in data.

There is a bit of controversy over who owns the worldwide rights to the QR code as a Germany company had apparently come up with the concept a few years before Denson Wave.

Some street billboards have included some large QR codes which make people wonder how drivers would be able to scan the code. Consumer Safety groups have argued that such billboards are distractions and could be a driving hazard.

The nation's largest billboard company, Clear Channel, has publicly promised to only use QR codes on billboards targeting pedestrian traffic.

If you need to stock up on some new business cards, why not add a QR code on the back. There are plenty of websites that will generate QR codes for whatever websites that you like people to visit.

Here are a couple of sites to generate your own and download an image for the backside of your business cards. Make sure to use a high resolution so the QR Code doesn't get pixelated.

Vistaprint and Moo offer the ability to upload images on the backside of business cards.