Fun Facts about this Framingham Monument

If you drove around the Village Green at Framingham Center, chances have you probably seen a large status. This is located in front of the Edgell Memorial Library. 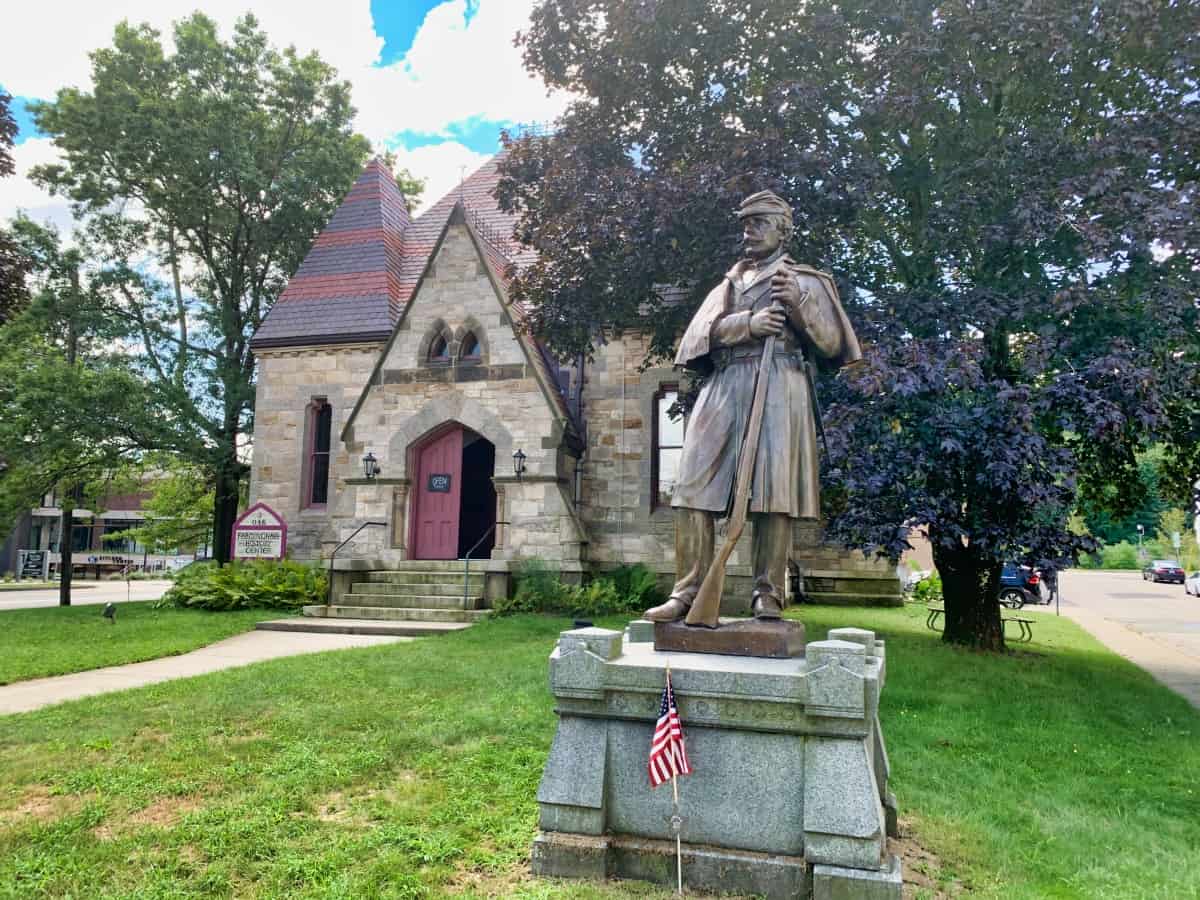 Eight Things I Learned About The Statue

Statue was built in 1872 as a special memorial for Framingham residences that gave their lives during the Civil War.

The sculptor was Martin Milmore. Some of his other works include The Soldiers and Sailor Monument in the Boston Commons, the Statue of John Glover on Commonwealth Avenue, and more. You can see Martin Milmore's signature on the back bottom of the statue.

It was made by Ames Manufacturing Company in Chicopee, Massachusetts. On the bottom front right, you can see the company name etched in the statue. You can also see the year it was made: 1872.

The statue was originally located inside the building but moved outside around the turn of the century. There is a tablet inside that lists the 27 names of the Framingham men who died in the Civil War. The statue was likely located in the center of the Edgell Memorial Library entrance hall.

The statue was dedicated at the same time as the Edgell Memorial Library: Saturday, February 22, 1873. (February 22, 2022, will be the 150 anniversary) George B. Brown, Esq. gave the dedication speech.

George B. Brown, Esq. was chosen as a speaker as he organized the fundraising and construction of the memorial library.

Names on the Monument

These are the names of the 27 Framingham Soldiers that died in the Civil War. Most of the people on this list are buried at the Edgell Grove Cemetery & Mausoleum.

Part of the Address Delivered by George B. Brown, Esq., at the Dedication of Memorial Hall and Library Building, Framingham, February 22, 1873

"Time and tide wait for no man;' but for the completion of this building, we are fully aware you have had to wait many a sun's circuit, and many a flood and ebbing tide. All the whys and wherefores of this delay may per mission, rest alone in the bosoms of those who are familiar with all the details. If the cost for the faithful and worthy completion of this structure may seem large, and taxation to fulfill the obligations its erection imposes seem onerous, let us be consoled by the thought, that in our day and generation, if we have not done all that we could, we have at least left one monument of our more generous impulses, around which our children may gather with feelings of honest pride for the memories of their fathers....

Friends, the building the completion of which we today celebrate will decay. Time's ceaseless, tireless agents are already at work for its destruction; and some future age shall look on its crumbled ruins. But there is a MEMORIAL HALL of vaster proportions, whose walls age shall not crumble, nor time deface; and in niche and nave, on wall and ceiling, as on columns that support its measure less dome, are tablets, whose chiseled letters are the names of earth's past nobility, of every nation, kindred, tongue, and people. May their example in the past, blending with their soft cadences from above, whisper to us, 'Write your names also on the tablets of heaven!'

Information about the Framingham Centre Civil War Memorial Statue was gathered from various news stories and published reports done at the time.