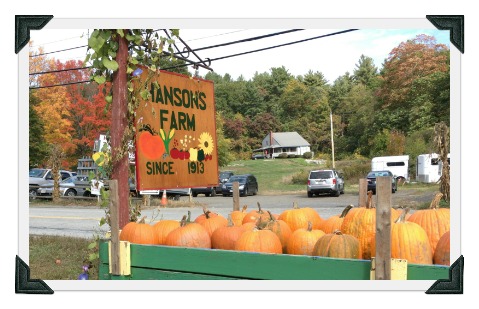 In the early days of Framingham, there were many farms all over the town. There were so many that every year there was an agricultural fair where farmers could showcase thier crops.

According to the current Framingham town records,, there are now two active farms in the town of Framingham. The town remaining farms are Hansons Farm and Stearns Farm. The two farms are practically neighbors located near Callahan State Park.

The two farms are on land that was once part of Danforth Farms - the first farm of Framingham.

We were lucky that there weren't that many people at the farm. We parked across the street and walked over to the farm stand.

Bring your Camera and Creativity

In front of the farm stand there are all sorts of fall displays - perfect as a background for fall pictures. There was an old tractor where kids can pretend they are riding it while Mom and Dad take pictures.

At the pumpkin patch, there is a large field with the Callahan State Park in the background. This is a great place to take fall pictures. Occasionally you'll see

At the first pumpkin patch is an oversize pumpkin where kids can go in and parents can take a picture to remember the day. Come back every year and you can see how much the kids have grown.

The pumpkin patch is a short walk from the farm stand to the field with all sorts of Pumpkins. Make sure to bring one of the red wagons - you'll need it.

There are a lot of pumpkins to select from. We found that it was best to keep the red wagon in the middle of the field until we found the perfect pumpkin.

In 2016, the pumpkins cost $.69 a pound. They had Cheese, Large, Cinderella, Goosebump, Mini and Batwing Pumpkins. You could buy quality Cornstalks, Hay bales and Indian Corn for awesome home fall displays. 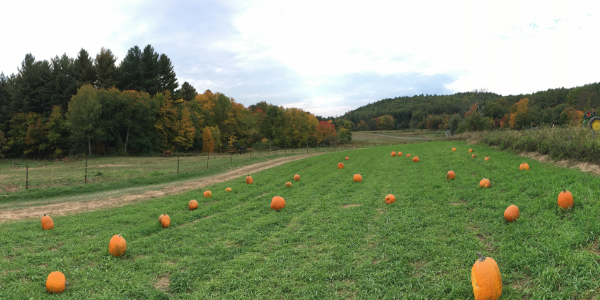 Fun Facts that I learned about the Hansons Farm