The main MBTA commuter parking lot in Framingham is located at 2 Franklin Street. This lot is often called the Banana Lot because of its banana like shape. Because of its proximity to the commuter rail station, commuters have to cross a set of tracks to get to the inbound track boarding area.

Framingham Commuters did you know that there are a set of tracks that commuters are technically not allowed to cross? Last week Framingham Police were preventing commuters to cross the main set of railroad tracks.

Commuters are supposed to use the pedestrian overpass or cross the tracks at Concord Street. In Massachusetts, it's illegal to cross any railway tracks except at a designated crossing points.

Section 218. Whoever knowingly, without right is present, stands, walks, or rides a bicycle, snow vehicle, recreational or other vehicle on the right-of-way, bridge, or other property of, or used or controlled by any railroad corporation, except at a highway or other authorized grade crossing and except on rights-of-way formally abandoned pursuant to state or federal law and no longer owned by said railroad corporation or rights-of-way owned by said railroad corporation but which have been converted or leased specifically for use as a bicycle or walking path in accordance with state or federal laws, shall be fined $100 or shall be required to perform a total of 50 hours of community service which may include service in the operation lifesaver program, so-called. Any person violating this section may be arrested without a warrant by any police officer, including railroad police, and proceeded against according to law.

Operation LifeSaver is a non-profit organization that educates the public about rail safety. According to Operation LifeSaver, some trains can take a mile for to come to a complete stop. Remember that the tracks are used by freight and commuter rail.

There is a sign near the crossing which may indicate that it's safe to cross here: 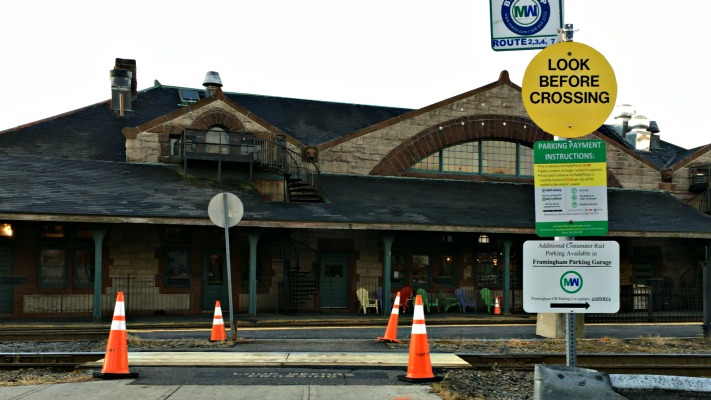 Since the sign is warning pedestrians to "Look before Crossing" it appears that this is a valid crossing point. However, the MBTA and CSX claims that only the first set of tracks is valid. (Which is why it has a wooden base) It's illegal to cross at the main set of tracks in front of the old station. 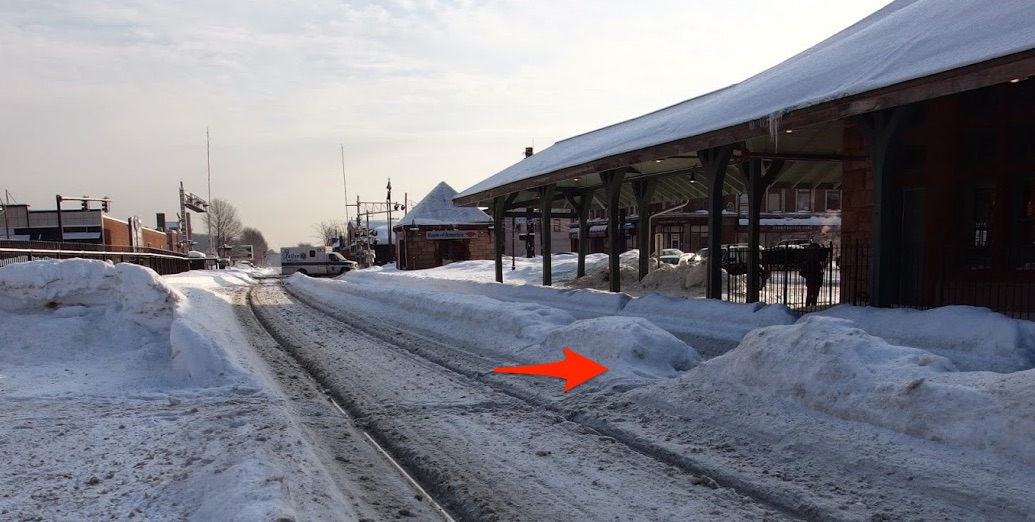 In the Winter, commuters cut across the tracks and leave a path in the snow pile for others.

My assumption was mostly wrong, while the fence is there to prevent immediate crossing, pedestrians should never cross tracks when they have to step over the tracks and there's gravel on the ground. Proper crossing will always have a flat surface.

Why doesn't the fence go to the road?

According to the MBTA and CSX, the reason why the fence doesn't go all the way to Concord Street is because there isn't enough clearance for two trains and the fence. The tracks come closer together within a few yards of the street are closer. The MBTA and CSX say that it's too close to a fence.

When the new Framingham parking lot opens in the Spring of 2017, the existing entrance to the train tracks near the Deluxe Depot Diner will be closed. Commuters will have to use the new entrance by the pedestrian overpass to get to train station.

The new entrance is good news for the commuters that park at the Pearl Street Garage since the walk to the station will be a slightly shorter. This is bad news for those that are waiting for the MWRTA bus and wanting to get a drink at Tedeschi Food Shop, or go to the ATM - those people will have to use the Concord Street crossing.