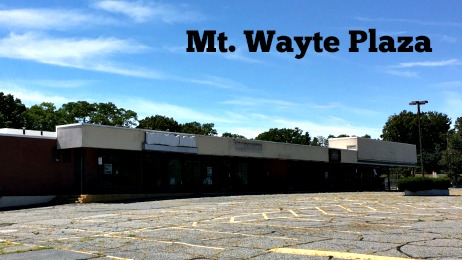 The Mt. Wayte Plaza is a dead strip mall at the corner of Mt. Wayte Ave and Franklin Street Framingham. The once thriving plaza is now mostly fenced in and since February 2015, has only one tenant. A few years ago the plaza owners promised local residents a complete redesign which would revitalize the area.

The official Address of the Mt. Wayte Plaza is 444 Franklin Street, Framingham MA 01702.

Current owner is Framingham Franklin LLC and managed by Samuel Adams, who father use to own the plaza.

Stores that Use to be in the Plaza

What ever happened to the 400 Restaurant?

In 2007 the 400 Restaurant and Bar was re-opened into a quaint, neighborhood Italian-style restaurant. While the exterior still maintained its original charm and character, the inside was redecorated with the North End, trattoria-style design.

The 400 Restaurant closed its doors at the end of December 2013 because the owners, Bob and Amelia, were not able to secure a long-term lease.

According to local residents, there was a bit of a bad break up when Dunkin Donuts left the plaza. Immediately after they left new fencing was put up around the plaza to prevent Dunkin customers from parking in the nearly empty plaza.

Dunkin Donuts did have a bit of a hurdle opening their new locations, as the planning committee wasn't sure that there was enough parking for the anticipated morning traffic. This was partly due to the limited parking with the new fencing.

Dunkin Donuts isn't the first place to move out of the plaza and relocate nearby: O'Brien's Package Store did that back in 2004 and open next door, between the TD Bank and Convenient Store.

What could go in Mt. Wayte Plaza?

How about converting the Jon Snow's Shell Station to a Stop and Shop gas station or perhaps Cumberland Farms can open a gas station and future store? The could use the facility as a test market for their franchises.

The Plaza isn't too far from Framingham State University, how about opening the first Amazon.com bookstore on the east coast?

Over the past few years, Micro Breweries seem to be the hot thing in Framingham. How about the newest microbrew restaurant: "A wonderful restaurant near downtown Framingham, Framingham Pale boasts one of the area's premier outdoor dining courtyards. A cross between New England tradition, Boston beer gardens, and a Revolutionary farm house, this truly is a unique destination."