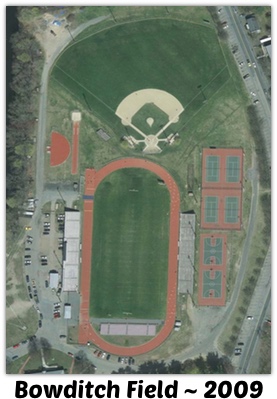 Bowditch field is a 18 acres athletic field in Framingham, Massachusetts. The field is home to the Framingham State University Rams football and baseball programs. The field also hosts football games from Framingham High as well as athletic events from Mass Bay. The complex is owned and operated by the Town of Framingham.

The field is located between Union Ave and Walnut Street in Framingham.

Brief History of the Bowditch Field

The field was the town's "Fair Grounds" and had the first fair in 1869.

In 1917 the town of Framingham acquired the property from the South Middlesex Agricultural Society. At the time the land was used for horse racing and yearly agriculture fairs.

The stadium opened in the 1930s and was one of the Works Progress Administration projects during the Great Depression.

In 1946, the town of Framingham named the complex after Nathaniel Bowditch a long time park commissioner. ( It was not named after the mathematician Nathaniel Bowditch, who also wrote The American Practical Navigator.)

The complex last major renovation was in 2009 and a grand reopening was in October 2010. (The original opening was to be on September 15, 2010.) It cost the town $7.9 million. New stadium seats were added as well as a new concession was built.

In addition, a permanent monument was created near the entrance to highlight the history of the field.

Some brief information I found on Nathaniel I. Bowditch:

Today most people use the running track as park of their daily exercise. The lights above the field are on every night until 11 pm. There are people that play team basketball until the lights go out.

Every Wednesday night in the summer the Framingham Running Club takes over the facility and conducts several races for kids of all ages. Ribbons are awarded for the first three runners that cross the finish line.

Metrofest has held its annual food truck event. The event features at least 20 food trucks, as well as activities for children, musical performances on two stages, and a tastings tent with craft beer, wine, and hard cider. The event as attracted some 13,500 guests to the Bowditch Athletic & Cultural Complex over the past few years

For one night in August, the town hosts a family movie night. People sit on the field and watch a movie on a large blow up screen. Past movie nights include The Lion King, Frozen and Zootopia.

Framingham High School Graduation and Commencement is held at the Bowditch field.

Parking is very limited with only 50 parking spaces in the immediate Bowditch field complex. The grass area, behind the concession stands, is open up during special events to accomodate more cars. There are some limited parking along Walnut street. Its highly recommend to arrive early for any major event.

The public is invited to use the track when there are no events happening. The football field is off limits to the general public. If you are planning to have an event here, reservations are required. You can download an event permit from the Town of Framingham Park and Recreation website.

Pets are not allowed in the Bowditch field complex.