Framingham Cushing Memorial Park is a beautiful spot for a walk, picnic, or just to relax. It's located on the edge of Framingham and Ashland, making it easy to get to either town. There are plenty of benches and tables throughout the park for visitors to use, as well as playground equipment and a large field perfect for games or Frisbee. The park also has several lovely gardens that change with the seasons.

In the summer there's nothing better than spending an afternoon at Cushing Memorial Park! 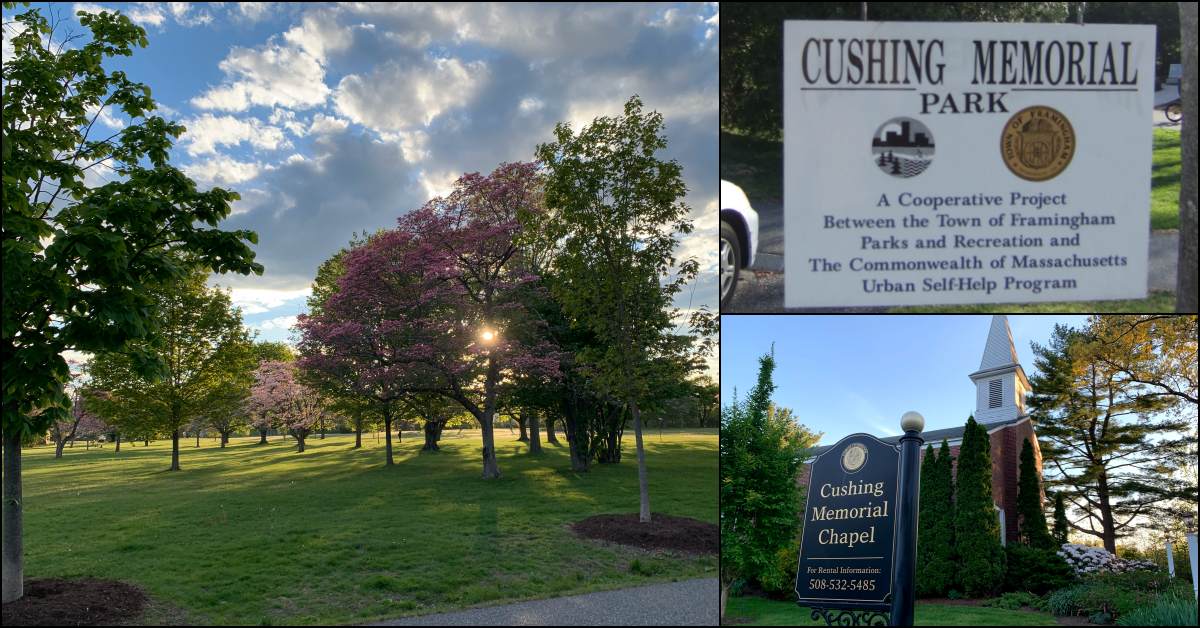 Property was once owned by R. H. Long Motors Company where they made Bay State model cars.

In 1926, The War Department purchased the property to build a hospital.

On Jan 25, 1944, the Cushing General Hospital was dedicated. The hospital specialized in neuro-surgery and general military needs. It was named in honor of the doctor who pioneered head wound treatment in World War I.

The hospital closed in 1953. The State of Massachusetts acquired the hospital as a geriatric hospital. The state closed the hospital in 1991 when tough economic conditions prevented the state from doing major upgrades.

In 1994, there was an article at the Town Hall Meeting to acquire the property from the Commonwealth of Massachusetts for recreation purposes. The article passed and the town acquired the property.

In 2006, Linda Libby, a Parks, and Recreation employee led a petition drive to name the park after Dr. Harvey Cushing.

The 57-acres park has 1.5 miles of circular trail perfect for an afternoon walk or run.

The Cushing Chapel is the original chapel that the War Department built-in 1943. This chapel is a nonsectarian chapel. You can rent the chapel for weddings or other events.

There are seven GeoCache objects hidden in the park. This is a fun activity for the whole family, and it's a great way to get outdoors and explore nature. The caches are well-hidden, so you'll need to use your detective skills to track them down. Good luck!

The park is a great place to take fall family pictures - plenty of trees have bright colors in the early days of October. In addition, there is a gazebo that is decorated for the season.

The 9/11 memorial at Cushing Park is in remembrance of Framingham residents that died on September 11, 2001. Every September 11th there is a special memorial service and American Flags are planted all around the memorial.

The City of Framingham has long-term plans to put in an artificial pond and a small pavilion near the children's grove. The pavilion is to accommodate community events

There are plans - now in progress - to expand the park. The parking lot off of Dr. Harvey Cushing Way is currently closed - the parking lot pavement will be removed and grass will be placed.