Professor of Composition at Brandeis University is good at font design

Here are some font examples there done by David Rakowski from the Boston Computer Society Software CD collection.

David Rakowski has been creating fonts since the early 1990s. All of his fonts are still available online at various font services such as fontspace.com, Font Squirrel, and dafont.com. Over the years he has created 96 fonts of various varieties.

David Rakowski is actually better known for his music. He is a Professor of Composition at Brandeis University. He has received numerous awards for his teaching and music. You can listen to some of his music on Spotify. 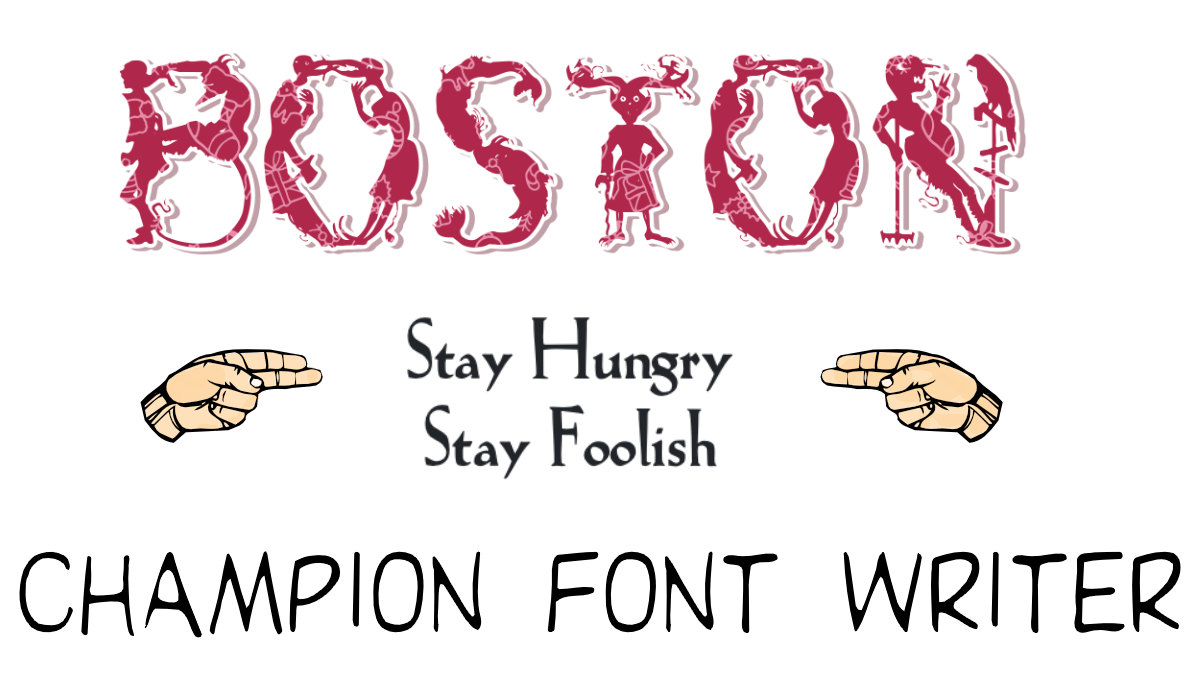 Boston is written in Bizarro, The fingers were done using Gallaudet, Stay Hungry was in Lilth and the Champion Text was done using Dupuy. These can be found in the collection in dafont.com.

One of the things I like is David's humor in the Read Me files. In the early read me files, he describes the history of the font and some copyright information. At the end of the file is some reference to the Insect Bytes.

Here are a few humor examples:

User groups, nonprofit organizations, and for-profit shareware/public domain outlets may distribute this font given the above conditions. The Dupuy fonts come to you from Insect Bytes, a place with so-so sunsets (say that five times fast) and spectacular stargazing.

Lilith-Heavy is copyright (c) 1992 by David Rakowski. All Rights Reserved. It is distributed as shareware; if you like, use and/or keep this font, please make a donation to the Columbia University Music Department of $3.01 (a mere penny more than the cost of Lilith-Light). If your first or last name is hyphenated, please send $4.01 instead. Make your check out to Columbia University and send it to Cynthia Lemiesz, Music Department, 703 Dodge Hall, Columbia University, New York, NY 10027. In it, you may enclose a brief letter with all the vowels left out (e.g. "Dr Cnth: Hw r y? m fn.).

Lilith-Heavy comes to you from Insect Bytes, and there's nothing you can do about it.

The Gallaudet font comes to you from Insect Bytes.

Bizarro is a real-life product of an imaginary entity known as Insect Bytes, a place where ice is something you walk on, not just something you put in a drink.

PixieFont is - by David Rakowski, and is distributed as shareware. If you like the font, please send a check for $4.99 payable to Columbia University to: Victoria Salter, Music Department, Dodge Hall, Columbia University, New York, NY 10027. You should also enclose the following letter, typed in whatever font you choose:

Here's some money. $4.99, to be exact. Now it's your move. Would a flashlight be better than velcro? I guess they had to take the wallpaper away. Nothing is going to stop the endless parade of purple. Oops. Gotta go.