Captain Jeremiah w was one of the key players in the American Revolutionary war. He holds the honor of being the first Revolutionary Captain to win the first Navel engagement against the British forces. This was an important event as it gave hope to the Colonial Navy forces that they could win against a strong navy.

Three months after the battle at Lexington and Concord, Massachusetts, the first American naval battle of the American Revolution was fought off Machias, Maine. The Americans, using pitchforks and handmade weapons managed to get on the British armed warships and brought the war to the seas. The five O'Brien brothers, Gideon, John, William, Dennis and Joseph overpowered the British and managed to kill Lt. James Moore.

This later became known as the Battle of Machias. 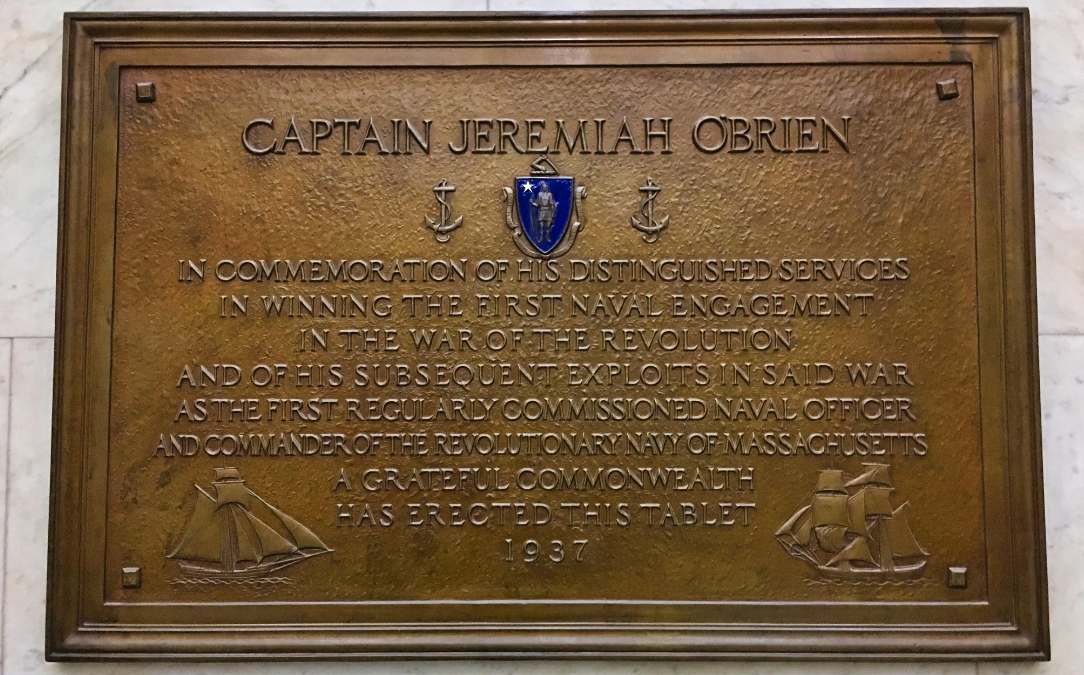 This Tablet is located in the Massachusetts State House in the Nurses Hall area.

A grateful Commonwealth has erected this tablet

Tablet was created by John Paramino, who also created other work around the Boston - including the World War 2 Memorial, Declaration of Independence Tablet and more.

The tablet was unveiled on Saturday, June 12, 1937, in a small ceremony. It was the 162nd anniversary of the Battle of Machias.

Former Representative Joseph F. O'Connell gave a speech about why the tablet was important - early historians of America ignored how the Irish were a big part of the Navy.

Jeremiah O'Brien died on September 5, 1818 in Machias, Maine - while it was still part of Massachusetts. Maine didn't become a state until March 15. 1820.

Along with this tablet, there were five ships in the United States Navy has been named USS O’Brien for him and his brothers. You can tour the SS Jeremiah O'Brien at Pier 45 at Fisherman's Wharf in San Francisco.

Here are some parts of the speech that we put in the records of the First Session of Seventy-Fifth Congress:

Massachusetts’ has determined that, in the march of time, the achievements of her heroes shall not be lost in the oblivion of the past, and today dedicates in enduring bronze this tablet to the memory of Capt. Jeremiah O’Brien, a Massachusetts naval hero of the Revolution, who won the first battle of the sea, on June 12, 1775; who captured the first enemy flag in battle on either land or sea; and who was the first naval commissioned officer and commander in chief of the Navy of Massachusetts in the War for Independence and of the Revolution.

She proclaims to the world, on this anniversary of the Battle of Machias, that she celebrates the day by recalling, through this official action, her proud claim that it was a native-born citizen of Massachusetts who first challenged England’s power of the sea.

This State is proud of the fact that it was off her shores that an English flag was first hauled down, after a sea battle in which the might of the British Empire had been successfully resisted.

Cooper, in his Naval History of the United States, called the battle off Machias the Lexington of the seas, and so it has been accepted by critical historians, and it is most appropriate that O’Brien’s success should be thus known. The Battles of Lexington «id Machias are much alike. In each Instance the regular force of the British had gone to attack the citizens of Massachusetts; in Lexington to destroy the supplies of the patriots; at Machias to intimidate and to secure the furnishing of lumber for the entrenchment of the British troops in Boston. The British were beaten in both battles—on land by the embattled farmers, and on the sea by Jeremiah O’Brien and his intrepid crew, after a bloody battle.

O’Brien’s victory—not alone in the personal odds against him— was graphically described by former Secretary of the Navy John D. Long, when he said: “It was the first challenge of the infant American Navy to the giant, and almost omnipotent, naval power oi Great Britain.”

it is quite fitting that this tablet to Capt. Jeremiah O'Brien should be placed in this beautiful setting with those whose work portrays the Revolutionary spirit; with Otis defying me might of Britain before the Supreme Council; with Paul Revere carrying the news of the approach of the British to Lexing¬ ton; and the citizens of Boston, under the leadership of Sam Adams, casting the offensively taxed tea into the waters of Boston Harbor.

May the enduring bronze of this memorial be a symbol of the courage and faith that brought into being our Commonwealth and Nation.