One of the nice things about https://www.keyboardmaestro.com/main/ is the ability to run Shell Scripts as part of a Macro action. This is useful when you want to apply a clipboard text to a shell script or just to execute a shell command.

Recently I wanted to set up a Status Menu action to simply run a shell script. I am doing some automation work and frequently need to test code changes. it's just easier to have a status menu than to open up a terminal and execute the run command.

To execute commands, simply use the Bash Shell: 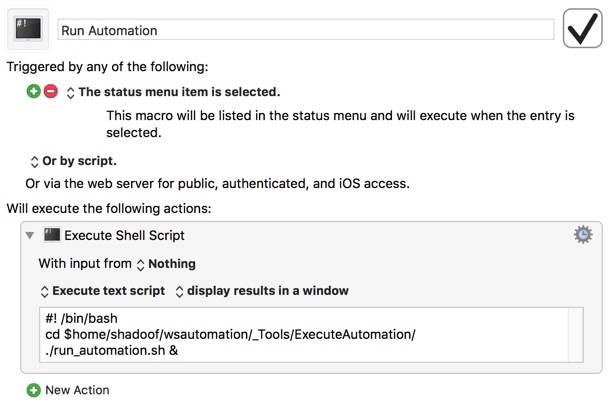 Some Notes about Shell Execution

Oh, more thing, if I want to run the command frequently, I can instantly change the macro to be included in the Global Macro Palette. It's a simple switch of the trigger type.

There's a lot of options available, including the ability to pass variables to the shell command. The Keyboard Maestro help section has a lot of detailed information on setting those up.

Filed under the Keyboard Maestro category.