Between Faneuil Hall and the Old State House is the Ames Boston Hotel. This building is the first skyscraper in the city of Boston.

Things that I learned about the Ames Building. 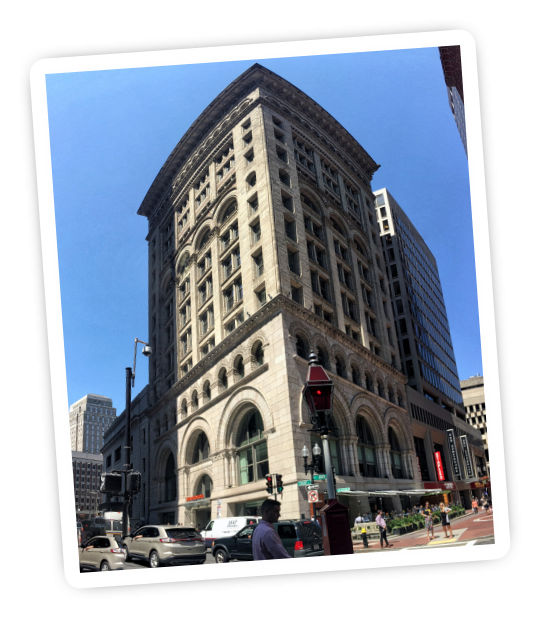 View from the Old State House.

Four firemen lost their lives in the construction of the Ames Building during a massive "The Thanksgiving Day Fire" on November 28, 1889. The fire was started in the basement of a warehouse about 5 blocks from the Ames Building. The fire destroyed hundreds of buildings and killed fourteen people.

Following firefighters were found dead in the Ames Building:

At one time there was a Time Ball on the top of the Ames Building. The ball was used to help mariners entering Boston harbor for the correction of their chronometers. Each day at exactly at noon the ball would be hoisted to the top of the pole on the Ames Building. The ball was put up on December 30, 1902 and taken down on September 7, 1923. It was removed since the invention of radio time signal the service was no longer needed 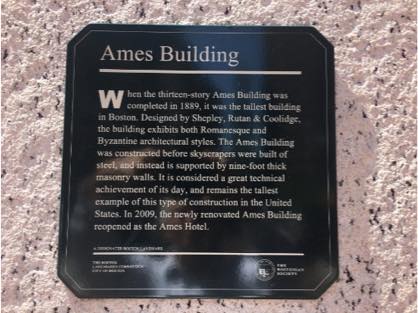 The Bostonian Society placed the following marker on the building:

When the thirteen-story Ames Building was completed in 1889, it was the tallest building in Boston. Designed by Shepley, Rutan & Coolidge, the building exhibits both Romanesque and Byzantine architectural styles. The Ames Building was constructed before skyscrapers were built of steel, and instead is supported by nine-foot thick masonry walls. It is considered a great technical achievement of its day, and remains the tallest example of the type of construction in the United States. In 2009, the newly renovated Ames Building reopened as the Ames Hotel.

The Ames Boston Hotel is located at 1 Court Street in Boston's Financial district. It's located directly across the street from the Old State House.