Elm Trees at the Shaw Memorial

What are those ugly trees there? Why don't they just cut them down and let everyone see the beautiful State House building?

Oldest Elms Trees on the Commons

Those ugly trees are confirmed to be the Oldest Elms trees in the Northeast.

In 1780 John Hancock sought permission to plant trees in the park across his residence on Beacon Hill. The city of Boston agreed with his request

Yes, that John Hancock. The first person to sign the Declaration of Independence and who later became the first governor of Massachusetts. Not to mention that he played a critical role in the revolutionary war. He planted those trees that you see at the Shaw Memorial.

This year the set of trees will be at least 237 years old. 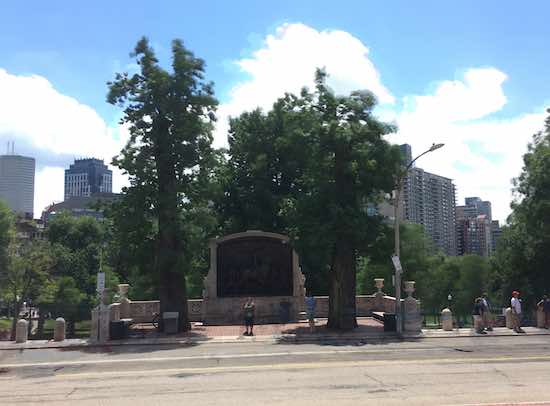 Last year I wrote about the famous Great Elms of the Boston Gardens. Nobody knows exactly when that tree was planted, and by whom. (Some say it was planted by Capt. Daniel Henchman in 1670)

When the Great Elm of the Boston Commons came down in 1875 it was estimated to be about 206 years old.

The Shaws Memorial Elms is currently at least 237 years old. (Based on being planted on 1780 ) This makes it the oldest Elm on the Boston Commons.

This means that the Oldest tree in the Boston Commons is the set of Elm Trees around the Shaw Memorial.

While researching about the trees in the Commons and Gardens, I did learn that there is another tree that is older in the Public Gardens. Public Gardens officials have not disclosed which tree it is so that no harm will come to that tree.

Elm Trees are in a Music Sheet from 1830

In a Illustrated music sheet cover from 1830, you can see the three Elm Trees right in front of the State House. This was done about 50 years after the trees were planted.

You can see the small trees growing up in front of the State House. 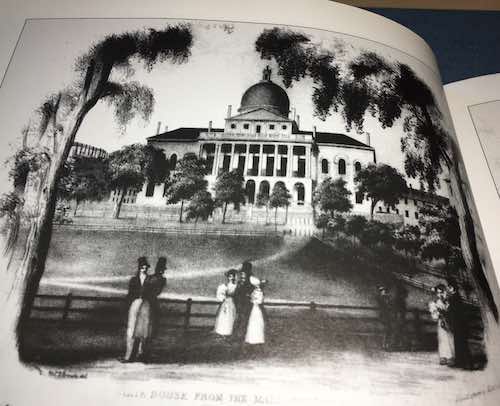 Since the 1970s these trees have received the VIP treatment. The special tree experts check out the trees every couple of weeks and make sure that they are doing well.

Bricks were placed in one of the trees to keep the tree stable and to prevent any damage to the inside of the tree.

Check Out the Trees 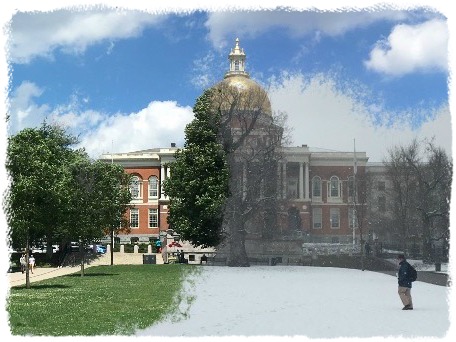 View of the trees from Park Street Station in the Winter and the Summer.

The trees are located on Beacon Street directly across the Massachusetts State House.