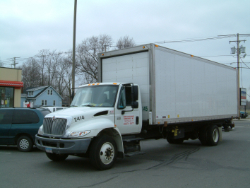 As a motorist, you probably take multiple commutes across your city or town each and every day. In fact, most individuals spend nearly eighteen thousand minutes per year commuting within their cars. This equates to twelve straight days that Americans average each year in their cars! With all of this time spent on the roads, it becomes more than important to make sure that we are remaining safe while traveling to our destinations.

We can discuss some of the most typical areas- like distracted driving and drunk driving. However, there are particular areas that should be evaluated more thoroughly that may be overlooked by the average driver. These areas include other larger-scale automobiles and trucks. Commuting with, beside, and around them can always become an obstacle even for the most seasoned driver. But, what are truck drivers and the local government officials doing to keep us safe while traveling with larger big rigs?

Truck inspection stations can be seen along highways and roadways across the United States. For drivers, inspection stations may be a burden to commonly travel through and stop. It puts a halt on the driver's time progress being made while commuting, however enforcing these stops and ensuring they are enforced to all truck drivers is essential for every motorist on the roads.

Typical truck inspections include tire pressure checks, engine visual checks, brake inspections, and any overall areas that appear as a potential threat to other motorists. It's up to the truck companies to ensure these inspections are enforced and that all drivers are abiding by the processes set forth by the government.

Weigh stations are most important in areas where the elevation increases, like mountainous areas. Traveling down steep inclines can put a lot of strain on the brake systems of trucks, so ensuring trucks are following proper weight guidelines can help prevent brake malfunction in the event of an emergency.

Furthermore, weigh stations are enforced to reduce overloading of trucks, which can damage our roadways and infrastructure systems. Excessive amounts of weight not only cause potholes and damaged asphalt, but they also can raise concerns for other motorists traveling around trucks. In the event a truck needs to make a quick turn, or dodge another motorist, trucks carrying a lot of weight can cause a detrimental outcome when involved in an accident. As a result, weigh stations are heavily enforced among truck drivers, and can provide hefty fines if they are broken.

What motorists should watch for

When traveling down a busy street or highway, it's important to remember the obstacles that truck drivers face while commuting. It's difficult for them to see other vehicles passing or around them because of the numerous blind spots that are a result of their height above ground. Additionally, they are carrying a lot of weight, so maneuvering quickly can easily become difficult in comparison to a typical driver in a smaller car. Furthermore, cars should give ample space to truckers as it may be more difficult to make turns and fit into roadways or bridges that are tighter in space. As much time as the typical American spends motoring the roadways, remaining safe as well as helping a truck driver to make a more successful, safer route to their destination can make all the difference.