HyperCard was an application program for Apple Macintosh and was an influence for the first web browser. It allowed developers to create stacks of information and link the stacks together. Developers would program stacks using HyperTalk, an object-oriented scripting language.

From the Introduction Stack on HyperCard Help screen:

HyperCard is a Macintosh Software environment that allows you to create your own way of doing things on your computer.

If you're new to HyperCard, you should go through the HyperCard Tour Stack to find out how HyperCard works. You can also use the book "Getting Started with HyperCard" for some beginning practice.

If you're interested in HyperTalk, the language you use to write scripts, choose HyperTalk Reference from the Help Menu.

Hypercard was distributed free with any new Macintosh purchase.

HyperTalk was popular among Macintosh users as consumers could easily create their own stacks for their computer needs. Some examples of HyperCard 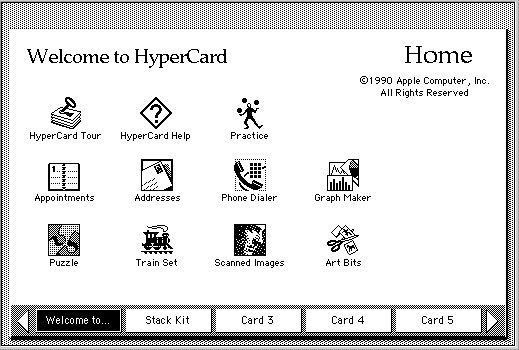 Bit of Apple humor in the "HyperCard And You" Technical Note that some developers might have missed:

The 15 Billion Horsemen of the Apocalypse

With the introduction of HyperCard 2.0, many of the old bugs were quashed, and absolutely no new bugs were created. In fact, the software was so bug-free that it immediately attained Nirvana and Apple has had problems getting it to do anything since. Just kidding.

In the early 1990s, the Boston Computer Society distributed HyperCard stacks of Boston Freedom Trail and a Welcome to Boston on its CD. The CD were released at MacWorld Boston and available for sale at Trade booths and later via mail order.

The Boston Freedom Trail is a 2.5-mile, red-lined route that leads you to 16 historically significant sites — each one an authentic treasure. The Boston Computer Society created a set of HyperCard Stacks so that people would learn about the 16 historical sites. This was a very popular HyperCard stack collection.

The application has trail maps and pictures of the various sites around the City of Boston. 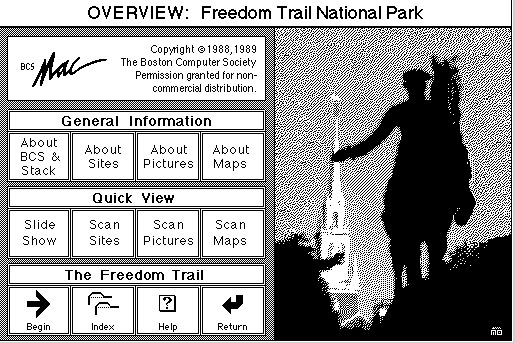 At the 1992 MacWorld Expo, The Boston Computer Society put together a HyperCard Stack of getting around the City of Boston. The stack featured 16 different categories of places to visit and important phone numbers. 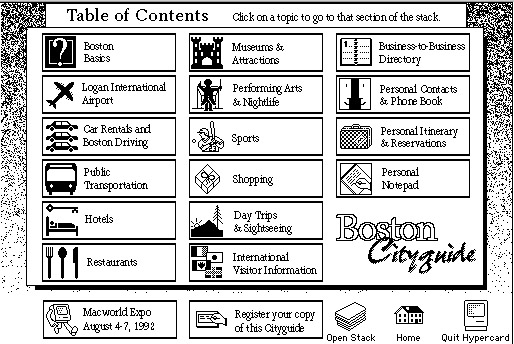