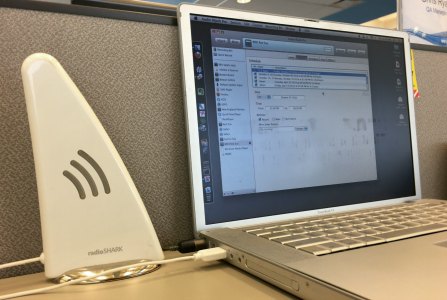 Griffin radioShark is a pretty cool USB device as it provides a stereo FM/AM band radio receiver to a Macintosh or PC computer. It integrates really well with Rogue Amoeba's Audio Hijack.

In recent years, many radio stations have provided live feed via the Internet. radioSHARK key advantage is when you don't have Internet access you can still listen to the local over-the-air broadcast. In addition, your not using up any internet bandwidth just to listen to local radio.

So why not just connect a radio to your computer? You could, but if you wanted to listen to different radio stations it could be a hassle.

Combine with Rogue Amoeba's Audio Hijack, you have the ability to record live broadcast whenever you want. You can record your favorite morning drive team then at the end of the day change to the "All news station" to hear the events of the day.

Griffin Technology has discontinued the radioSHARK and you can only get it on eBay, Amazon or craigslist. The radioSHARK is available on Amazon for $50, which is premium price of $35 that I paid.

In addition, it doesn't hurt to have access to the radio in a high rise building. If we loose Internet or power, it might be good to hear what's going on.

Setting up the Radio Station is really easy to do in Audio HiJack Pro 2.9.1

So why record live radio broadcasts?

Because Someday I'll want to remember the "good old days." When so and so happened:

I have my radioShark connected to my old PowerBook G4 laptop and configured Audio Hijack Pro to record WEEI. This is perfectly legal because I am not going to redistribute the audio file, it's for my personal use.

My PowerBook might be old, but it's still a pretty powerful machine. The battery life isn't all that well as it uses it, but as long as I have it plugged in it works perfectly fine. I simply set up the times and stations that I want to be recorded, then dim the computer screen.

I have an 8GB SanDisk Flash drive that I use to move files from the Powerbook to my iMac computer. An 7 hour 30 Minute stereo radio broadcast takes up 432 MB, when compressed to MP3 (at 44,100 Sample Rate).