The first correctional facility in Boston was called the Boston Gaol and it was located between Court Street and School Street. The jail was in use between 1635-1822. The jail was created less than five years after the city of Boston was founded.

Some people called the Boston Gaol the Boston Stone Jail because of the thick stone walls.

The word "Boston Gaol" means a correction facility. the term gaol is used in Australia, New Zealand, Ireland and the United Kingdom. Since the facility was under the British rule, the name Gaol was used instead of jail.

Some notable people that spent time in the prison include:

Captain Kidd - Spent a year in the jail before heading to England to be executed.

Mary Dyer - Visited the jail many times to comfort fellow Quakers. She also sent to jail for refusing an order to leave town. She spent the last night at the Boston Gaol before being executed in the Boston Commons.

Religious Leaders - Quaker's such as Anne Hutchinson were held in jail for being outspoken about their religion.

Solders involved with the Boston Massacre - Were held in the jail in hopes to calm people down.

James Lovell - He was a delegate for Massachusetts to the Continental Congress from 1777 to 1782. He was a signatory to the Articles of Confederation. He was held in the jail as a likely dissident after the Battle of Bunker Hill.

John Leach - kept a journal of his confinement by the British Troops. He was in jail from July 2nd to 17th 1775.

Downfall of the old Boston Gaol

The Boston Goal went through many revisions and relocations over the nearly 200 years of its existence. By the 1820s it was too small to handle the increased jail population. 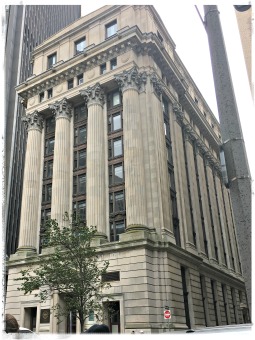 The Leverett Street jail was the success to the Boston Gaol.

The Boston Gaol has been long gone and the former site is the Boston Public School administration building. Directions to the site of the Boston Goal:

There is a small sign on the front left of the building to indicate the past history of the location:

Old Prison
The first prison in Boston stood on this site, close to the center of government and trade in the early settlement. In The Scarlet Letter, Nathaniel Hawthorne describes its appearance: "The rust on the ponderous iron-work of its oaken door looked more antique than anything else in the New World...But on one side of the portal, was a wild rose-bush."

Did you know? Captain Kidd was brought here in 1689 after he was captured, and before he was shipped to England to be executed. 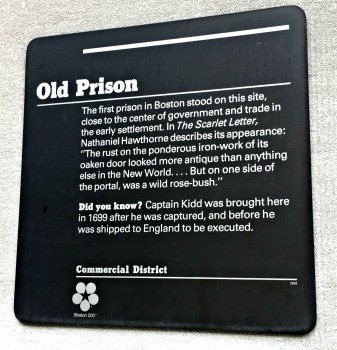