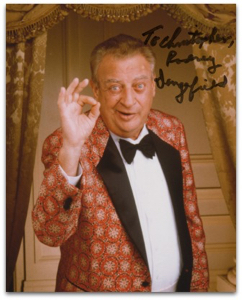 Rodney Dangerfield was a brilliant comedian. He is well known for his "I don't get no respect!" routines.His comedy career peak was in the 1980's with several sold out shows and movie appearances such as Back to School, Caddyshack and Easy Money.

I saw his comedy act in Las Vegas in 1998. At the time he had a personal website and was selling a lot of Rodney Dangerfield items. He would mention the website on various Tonight Show appearances. Since I was a big fan, I decided to order some things; an autograph picture and his autograph on his trademark red tie. I don't remember how much I paid for each, but I do recall the tie being a bit expensive.

A few days later a big box showed up at my door in San Jose, California. It was from Dangerfield Entertainment. When I turned the box over I was surprised, it was the picture of Rodney Dangerfield created with a solder iron and solder. I have never gotten a box like this and have kept it. 18 years later, after 3 moves, including a cross-country move, I still have that box sitting in my attic.

The red tie is a classic, I am not sure it's worth anything, but to me it's priceless. It's really cool to have a trademark Rodney Dangerfield tie.

The only thing missing from the package was the autograph picture. I sent an email to Dangerfield Entertainment to let them know that I never got the picture, and a few days later I got a Photo Mailer with a personalized autograph picture from Rodney Dangerfield. I know it's authentic because it's similar to other autographs that I see online. I have kept that picture in the photo mailer that it came in.