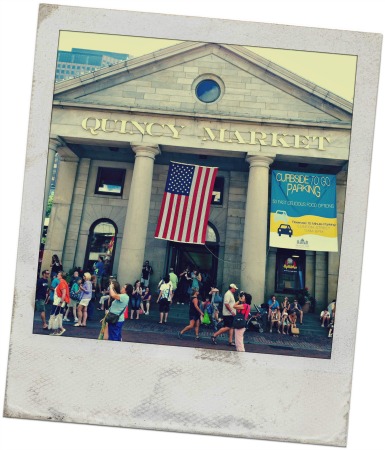 Faneuil Hall is a huge tourist attraction in Boston. Here are five key things that you shouldn't miss on your next visit:

Sitting on top of Quincy Market is the historic Golden Grasshopper. In 1761, a fire at Faneuil Hall damaged the grasshopper weathervane. Thomas Drowne, a blacksmith and the son of the original grasshopper's creator, repaired the weathervane and inserted a "time capsule" in its stomach. The capsule, which is engraved "Food for the Grasshopper," includes historical newspapers, coins, and messages. Whenever the grasshopper gets a major refurbishment the time capsule gets a small update from the sitting mayor.

In 1974, some people thought the Golden Grasshopper was stolen as it went missing for several days. It turns out that some construction workers took down the grasshopper under some flags.

The "Golden Grasshopper" is the last remaining artifact from the 1742 structure.

Secretary of state John Kerry got his start in the business world by baking delicious cookies.

If you like large premium cookies, in all sorts of flavors, check out Kilvert & Forbes near the East Market entrance. Get some for now and some for later.

When your placing your order, asked the server when they last saw the current Secretary of State, he usually drops by every once in a while.

The oldest continuing running restaurant is Durgan Park. They have two big signs outside; "Established Before you were born" and "our Grandfather and perhaps Your Great Grandfather dined with us, too!"

The restaurant opened in 1827 about a year after Quincy Market opened. There was a restaurant at that location since 1742, but it wasn't called Durgan-Park.

There's nothing like trying some classic New England recipes. Not all that hungry? Try some New England chowder with a beer from their large selection. Make sure to stop by the store and take home a souvenir bean pot.

There is a beer garden in the basement floor of the Durgan-Park building. On Wednesday nights there is a comedy show called "Woodstock Wednesdays" starring the local Boston comedy troupe "Just Suspects". Great place to go if you're looking for something to do on a Wednesday evening.

Durgan Park is located in the North Market building. They are open every day for Lunch and dinner.

Some of the company names that are on the wall:

When you're standing on the first floor and looking up at the central rotunda, you can see a message in gold lettering. It reads, "This building has served the people of Boston as the central market of the city since its dedication in August 1826."