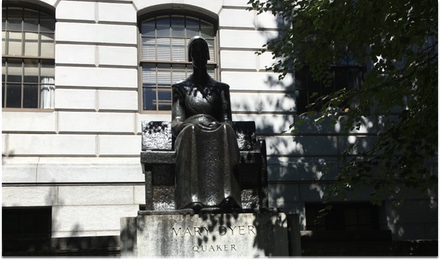 Anne Hutchinson statue is by the West Wing and Mary Dyer is on the East Wing.

Who was Mary Dyer?

Mary Dyer was a Quaker who kept visiting Boston to meet up with her friends in jail. Local officials had requested her not to come to Boston. But she defied the order and paid the ultimate price.

Here's a brief version of what happened to Mary Dyer:

In Colonial Massachusetts Puritans didn't have a favorable view of Quakers. Quakers would constantly interrupt Puritan's sermons with their own views.

In 1657 the General Court of Massachusetts who rules, "anybody who should lodge a Quaker should be fined for such offence at the rate of 40 shillings for every hour of such concealment...that every Quaker man after being once punished and banished should presume to return should have one of his ears cut off for the first offence, and for a second offence his other ear, and for a third offence should have his tongue bored through with a hot iron."

One night Mary Dyer, who became a Quaker while visiting England, was passing through Boston to her home in Rhode Island. She was arrested and imprisoned. She was released by the request of her husband.

A couple of years later, she returned to Boston to visit friends that were imprisoned. She was brought before the court, with her friends, and was told to get out of Massachusetts within the next 48 hours. If they were sill in the commonwealth after that time, they would be put to death.

Mary Dyer left Massachusetts to Rhode Island but returned to Boston 30 days later to visit other Quaker friends that were imprisoned. She was arrested and on October 27, 1659, was to be hanged.

Her son pleaded to the court for her release The court agreed and allowed her to return to Rhode Island.

In May 21, 1660, she returned to Boston. She was arrested and given the death penalty. The court wasn't going to accept any reprieve.

She was told by Governor John Endecott, the first Massachusetts Governor, "You will own yourself a Quaker, will you not? The sentence was passed upon you at the last General Court... now it is to be executed. Therefore prepare yourself tomorrow at 9 o'clock."

On May 22, 1660, at 9am she was taken from the Boston Gaol to the Great Elm of the Boston commons, a noose was placed around her neck, she was then asked if she would "go home and stay there."

She responded with "Nay. In obedience to the will have the Lord God I came, and in His will, I will abide faithful unto death."

Mary Dyer died minutes later. Her body was returned to her family in Rhode Island.

Why was the Statue Created?

Zeno Ellis, a banker from Vermont, put the following in her will

The figure on the Statue is looking towards the Boston Commons where Mary Dyer was hanged. Her back is to the legislature as if to make a statement about her death. She is wearing typical Quaker clothes.

The sculpture was created by Sylvia Shaw Judson. She is perhaps best known for the 'Bird Girl' sculpture which was used on the cover of "Midnight in the Garden of Good and Evil"