Next to the entrance gate of the Central Burying Ground in the Boston Commons is a marker for William Billings: 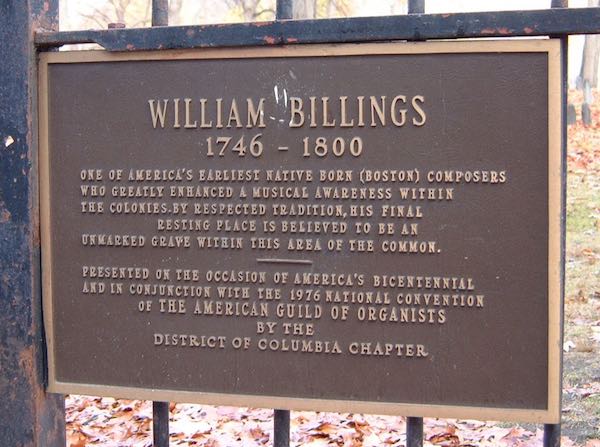 William Billings was one of the first American-born composers. He was singing master who tutored music to many wealthy families in Colonial Massachusetts.

He created songs that help inspired those that were fighting in the American Revolution.

Unfortunately he couldn't capitalize on his work because the newly formed country didn't have a well-established copyright system in place. He spent his final days as a poor sick man.

When he died his family couldn't afford a grave marker. He is buried in an unmarked grave someplace in the Central Burying Ground.

The Central Burying Grounds did encounter an incident in 1895. A few graves accidentally unearthed during the initial construction of the MBTA Subway system.

The unearth bodies were moved to a single gravesite. This is likely where William Billings final resting place is.

There is a marker to indicate where the bodies were relocated: 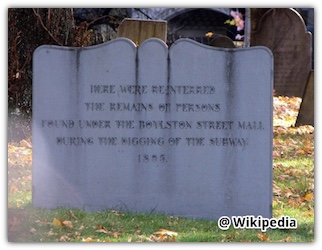 "Here were interred the remains of persons found under the Boylston Street Mall during the digging of the subway, 1895"

You can find William Billings: Wake Evr'y Breath album on iTunes. His music is usually played around American Independent Day.