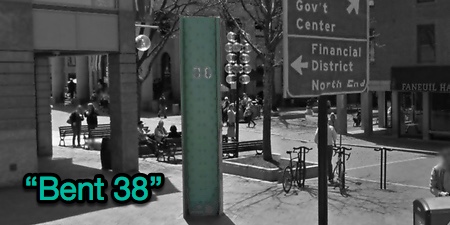 On the corner of Clinton Street and John F Fitzgerald Surface Rd, near Quincy Market lies a memorial to the elevated part of the John F. Fitzgerald Expressway.

The John F. Fitzgerald Expressway was a section of the highway in downtown Boston. Part of the highway was elevated from South Station to North Station, essentially splitting the North End section of Boston from the rest of the city.

Bostonians called this part of the highway many names: The Southeast Expressway, the Central Artery, Interstate 93, Route 3, the X-way, the Sexway, the Messway, Green Horror, and the Distressway.

The elevated John F. Fitzgerald Expressway was one of the Commonwealth's most ambitious and controversial urban redevelopment projects, Built by the Massachusetts Department of Public Works between 1951 and 1959 its downtown Boston route stretched from Dewey Square to North Station and allowed the growing crowds of suburban commuters to bypass the city's narrow streets. Twenty thousand citizens we displaced and hundred of buildings were demolished to build the six-lane skyway. Nevertheless, planners hoped that i.e. would alleviate congestion and simplify interurban travel.

Over the next 31 years the Expressway's daily capacity grew from approximately 75,000 vehicles in 1959 to nearly 200,000 vehicles in 1990. Pollution and traffic jams became a regular part of the city skyline, while the Waterfront and North End languished in the shadow grease and grime of the Boston's "other Green Monster." Between 1990 and 2007, the Central Artery/Tunnel Project redirected I-93 into a modern network of downtown tunnels. It also demolished the dilapidated Fitzgerald Expressway restored the city's surface roads and created the Rose Kennedy Greenway.

This structural column knowns as "Bent 38" still rests on its original foundations and is the only piece of the elevated highway that was left undisturbed by construction. It remains as a memorial to the Expressway and to the impact that the health of our transportation system have upon the life of our community. It also symbolizes the labor of scores of men and women who work to improve our city every day.