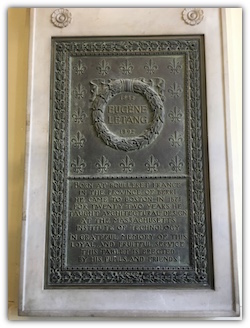 On the third floor in the McKim Building of the Boston Public library is a bronze tablet memorial for Eugène Létang. You can find this tablet just before you enter the Arts section.

The tablet reads: "1892 Born at the Boulleret France In the Province of Berri. He came to Boston in 1871 For Twenty Two Years He Taught Architectural Design At the Massachusetts Institute of Technology In Grateful Memory of this Loyal and Fruitful Service The tablet is erected By his Pupils and Friends"

The Letang memorial is a bronze tablet in a white marble frame. The upper part of the marble frame consists of a carved molding in Greek design.

The tablet was placed on December 31st, 1896, about four years after his death.