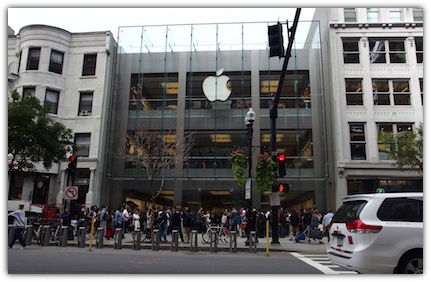 On May 15, 2008, Apple open its first store in Downtown Boston at 815 Boylston St. Apple knew that the business opportunity in Boston would be huge (Educational market) and they wanted to have a store to meet that demand.

In 2000, Apple sought out the 815 Boylston Street location, but had to wait until the lease ran out for all the tenants. They had the opportunity to build a two-floor store in 2005 but wanted to wait a year until the last tenant left so they could have the whole building and have more flexibility.

In 2007, Apple demolished the building and put in a modern three story building with a green roof and the front made largely of glass.

Copy Cop was a printing shop located at the street level at 815 Boylston St. The building was built in 1906 and had been under numerous renovations. According to Apple development team, there was no significant architectural value to keep the previous structure.

The two buildings around 815 Boylston St. had both seen demolitions in recent years. Fidelity Investments occupy one of the building and Sir Speedy occupies the other recently demolished buildings. (Oddly enough Sir Speedy was a competitor to Copy Cop before they moved out of the Apple location.)

What makes the Boston store special

The Boston Apple store is 21,350-square-foot which makes it the largest Apple store in the United States. The average Apple Store is 8,400-square-feet.

The floor throughout the store has grey-blue Pietra Serena sandstone imported from Firenzuola, Italy. These are the flooring that Steve Jobs personally wanted to have in the stores because they were authentic Italian and had high integrity. When you walk around the store, your walking on the same type of flooring that is used around Florence, Italy.

When the store the open in 2008, the layout was: the first floor was dedicated to Macs (iMac, MacBook, MacBook Pro, MacBook Air, Mac mini, Mac Pro); the second floor was devoted to smaller devices (anything running iOS), including iPhones and iPods (iPod touch, iPod nano, iPod shuffle, iPod classic); and the third floor featured the famed Genius Bar, where customers could get technical help. Concierge staff will be available on each floor just to help consumers navigate the building. (Note: The iPad had not come out when the store opened!)

Today, the first floor usually showcase some of the recently announced products such as the Apple Watch and iPads. There are 165 store workers -the Geniuses, Specialists, and Creatives at the Boston Apple Store.

Whenever Apple does a major product release, you will see a long line at the Boston Apple Store. Usually, the line starts about 24 hours before the official sale date. Local media will have their trucks park on Boylston street to talk about the product launch on the nightly news. (If the line is long and if it's a slow news day.)

Note: When you see a line at the Apple Store it's usually just customers waiting to purchase the newest products. You can still go inside the store and try out the new products.

Brief History of the Relationship of Apple and Boston

On January 30, 1984, Steve Jobs demonstrated the Macintosh to the Boston Computer Society at MIT. The demonstration was a week after the official announcement at the Apple Investment meeting. This was the first public viewing of the Macintosh. Steve Jobs wanted to showcase the computer to diehard computer fans.

During the summer of the 1980s and through the mid-1990s there was an annual gathering of Apple enthusiasts at MacWorld Boston. Apple would use these conferences to announce new products. The most famous moment was in 1997 when Steve Jobs returned to Apple and announced that Microsoft, a big competitor at the time, decided to invest $150 million in Apple stock.

Apple and Boston had a bit of a fallout in 1997 when Apple decided to move the conference to New York for a bigger venue and be closer to New York city graphic designers - a key demographic at the time.

MacWorld came back to Boston in 2004 and 2005 but without Apple participation - resulting into a much smaller conference.

Getting to the Store

The nearest T stop is the Green line’s stop at Copley Square, it's a nice four-minute walk to the Apple Store. When you exit the Copley T station, look for the Prudential Building and walk towards it. The Apple Store is across from the Prudential Mall. The big glass front face is hard to miss.