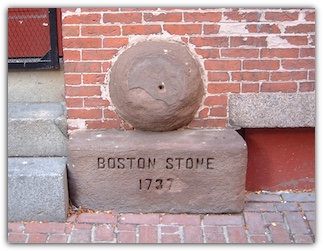 The Boston Stone is set into the wall of a building on 9 Marshall Street. It is really two stones - a rectangular base, with the carved inscription "Boston Stone, 1737," surmounted by a stone ball.

The Boston Stone has been a local landmark since it "magically" appeared in the 1700s. In 1835, it became an official Boston Landmark.

Here's some information Boston Stone trivia that I found:

There was no record of the "Boston Stone" until around 1770.

On the 'Boston Stone' is the year 1737. In my research, no one was able to identify the meaning of the date.

I came up with two possibilities:

The stone actually had a purpose it was originally a paint mill, imported from England around 1700 by Painter Thomas Child (1655-1706), who owned the property. The long stone in which a painter would ground and mixed his paint by rolling a circular stone ball back and forth.

When Thomas Child died, John Howe purchased the property and place the long stone and stone ball to the corner of the property to protect it from passing carts.

The wooden house that Thomas Child and John Howe lived in was taken down in 1835. The stone was relocated and put into the new brick building that is standing today.

The top circular stone use to have an eagle on it. (Probably placed sometime 1875 - America Centennial Celebration)

The Boston Stone was was originally stops of the Boston Freedom Trail in the 1950s.

Real Meaning of the Boston Stone

Around the turn of the century, when people would ask about the stone they were given a pamphlet with the following description:

The old wooden house now standing, has for many generations been occupied by a Painter. When the grandfather of the present owner. Mr. John Rowe purchased the house, a large stone was found in the yard. It was hollowed out on one side, used to grind paint. Being of no use in the yard, it was removed to the corner of the house to prevent carts from injuring the building. When I was a boy, in passing the building, I saw a lad named Joe Whiting, whose father occupied the shop, writing on the stone these words - "Boston Stone, Marshall Lane." After I became a man I asked Mr. Whiting who set the boy to work on the stone. He said, "Marshal Lane" at that time no being named, it was difficult to designate his place of business. A Scotchman who opened a shop for the sale of Ale and Cheese directly opposite made a complaint of the difficulty. He said, in London there was a large stone at a certain corner, marked "London Stone," which served as a direction to all places near it, and if I would let Joe write the words "Boston Stone" on this, people would notice it, and it would set them guessing what it meant, and it would become a good landmark.

Now you know. The Boston Stone is nothing more than an 18th Century marketing tool to get people to go down Marshall Street.