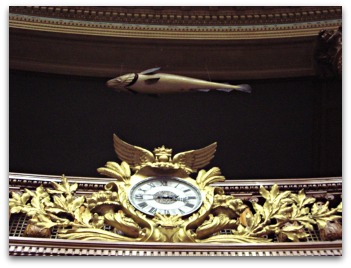 There have been three versions of the Sacred Cod:

There have been two cases of people stealing the Sacred Cod:

In 1941, the Sacred Cod became a topic when President Franklin D, Roosevelt visited Boston during a time when there was a push to use aluminum as part of the World War 2 defense. President Roosevelt was invited to visit Boston to start the nation-wide aluminum drive.

According to the Boston Globe, Franklin R. Roosevelt said, "I have been informed that the Sacred Cod emblem of Massachusetts, which hangs in your august chamber, is made of aluminum, or of aluminum sections. I think it would be a generous gesture and an example to the rest of the citizenry if the members of your honorable body voted to contribute the code to the cause of the defense."

The Sacred Cod is under the Massachusetts State Art Commission control, and they did not approve of removing it from the chamber. (There's no indication that they actually took President Frankin D, Roosevelt offer seriously.)