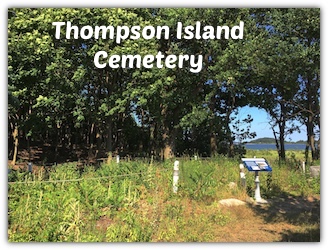 Thompson Island is the only Boston Harbor island to have a private graveyard. The graveyard is located on the southern tip of the island.

In 1842, 23 students who were being rewarded for good behavior with a fishing trip perished tragically in a boating accident. To honor these students the school created this cemetery. Nearly five decades later another boating mishap took the lives of seven more students they too are buried here. The cemetery also includes students or island residents who passed away from illness or accidents, as well as several pre-contact Indians whose remains were discovered on the island.

People that are burried here:

Specific names were not found.

Seven of the 9 Individuals that died in April 10, 1892, boating accident

A view of Thompson Island Cemetery with overgrown weeds.

Some interesting information about the graveyard