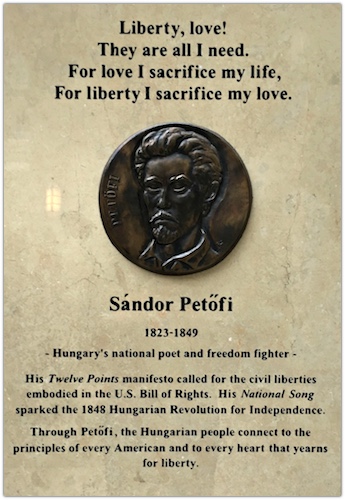 The Prudential Mall is known for it's fine shopping and dining experience. Did you know tuck away in the Huntington Ave wing is a small memorial for Sándor Petőfi.

This is the only memorial in the entire Prudential Mall. It was placed on March 17, 2013.

Who was Sándor Petőfi?

Sándor Petőfi (1823-1849) was a Hungarian poet and one of the key figures in the Hungarian Revolution of 1848. He is considered Hungary's national poet.

He is the author of the Nemzeti dal, which is said to have inspired the revolution in the Kingdom of Hungary that grew into a war for independence from the Austrian Empire.

Petofi's lifetime dedication to freedom and democracy make Boston, home of the American Revolution, an appropriate location for this monument.

Why at the Prudential Mall in Boston?

The Consulate General of Hungry is a few steps away from the memorial, they are at 111 Huntington Avenue, Boston, MA 02199.

Many countries have Consulate General in various cities in the United States as they work with the country's Embassy supporting issues to citizens living in the city or traveling to that city. There are Hungarian Consulates in New York, Los Angeles, Chicago, Houston. The Embassy of the Republic of Hungry is in Washington DC.

You may find a flower wreath place at the memorial a few times a year:

Here are the quotes that you will find at the top of the memorial: