The Boston's Great Elm was a famous tree that stood in the middle of the Boston Commons for about 200 years. It finally came down on February 15, 1876, when it was destroyed by a huge gale storm. The tree was a popular spot for people to visit in the 1800s. It also was part of Boston's early history.

Some Notes about Boston's Historic Tree

Nobody knows when the tree was planted, but rumors suggest that it was planted around the Kings Philip War around 1670 by Capt. Daniel Henchman.

In colonial times, the Boston Commons grounds were mostly a cow pasture. Cows use to lay down underneath the tree to get out of the summer sun.

The Boston's Elm was one of three trees show on early maps of Boston, which was engraved in 1722. The Boston Elm would be the last tree to fall.

The 'Great Elm' was known as "Boston Oldest Inhabitant."

Early town records indicate that Quakers and 'witches' were hanged on its branches. Mary Dyer was one of the colonial American hang from the tree.

The Sons of Liberty hung lanterns on evening during festival occasions.

Citizens use to gather near the tree to protest the British Occupation of the town.

During the early days of the American Revolution, British Solders camp underneath the Elm when they occupied Boston. 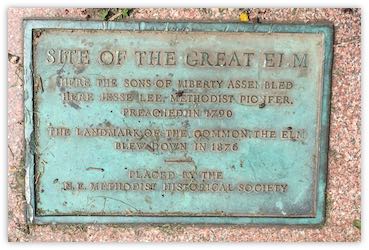 Before the tree came down, a small fence was built around it to prevent people from climbing the tree.

The tree was in tough shape after the storm in 1860 damaged the tree. It was a strong gale wind in a storm on February 15, 1876, that brought down the tree.

A chair made of the wood from the Boston Elm is in the rare book room in the Boston Public Library. Worth checking out if you're interested in Colonial Boston history.

The Boston Great Elm was located in the middle of Boston Commons, between the Boston Common Visitors Center and Frog Pond. The marker is in the ground. The center of the marker is green surround by light brown cement. (See the picture above)

From the 'Park Street' T stop, head towards the Brewer Fountain, then head towards the Boston Gardens. You'll be walking on the 'Mayor's Walk.' In about a 100 yards, you'll come to a walkway intersection. Take a short walk up the grassy hill and you'll see the marker for the 'Great Elm Site."

Site of the Great Elm
Here the Sons of Liberty Assembled
Here Jesse Lee, Methodist Pioneer,
Preached in 1790.
The landmark of the Common, the Elm
blew down in 1876.
Placed by the
N.E. Methodist Historical Society.