The Kings Chapel Burial grounds in Boston is the oldest graveyard in Boston. Founded in 1630, at the time of the settlement of Boston, For the first 30 years, it was the only graveyard in the city. The graveyard is not affiliated with any church, it just happens to be next to the Kings Chapel. The Chapel was built in 1688, 53 years after the graveyard was established. 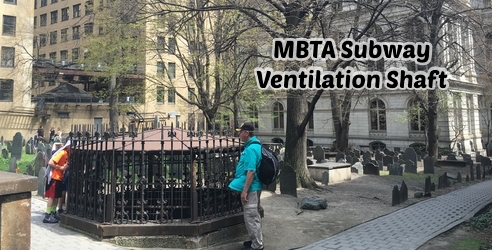 The Legend of Captain Kidd at the Kings Chapel Burial grounds

Captain William Kidd was a Scottish sailor who was tried and executed for piracy after returning from a voyage to the Indian Ocean.

In 1697, Captain William Kidd was asked by Richard Coote, the Colonial governor of the Massachusetts Bay colony, to catch pirates. Some say that William Kidd might have gone to the dark side and by 1698 was accused of piracy. He was tricked into coming to Boston for clemency and to prove his innocent.

On July 6, 1699, Kidd was arrested. He spent a year at Stone Prison, much of the time in solitary confinement. In early 1700, he was brought to England for inquest and trial. On May 9th, 1700, he was found guilty of murder and on multiple counts of piracy. He was sentenced to death and hanged on May 23, 1701.

Where is Captain Kidd's Buried?

It is very unclear to where Captain Kidd body is after the execution.

There are some legends that say that his body was brought back to Massachusetts and buried at Kings Chapel Burial grounds. His ghost is supposed haunting the Kings Chapel at midnight on Halloween.

Go to the cemetery at midnight, preferably when the moon is dark. Tap softly on one of the headstones three times, and whisper "Captain Kidd, Captain Kidd, for what were you hanged?" And in the dark of the night, Captain Kidd will answer . .

So when you visit the Kings Chapel Burial Grounds on a tour and they mention the Legend of Captain Kidd, you can be sure that it's not true.

Oh, in Massachusetts it's illegal to go to a cemetery after sundown. So the only person answering your tap will be a policeman asking you to leave the cemetery.