When you think of the Boston vs New York rivalry, what comes to your mind?

Long before the Babe was traded to the Yankees, there was an engineering rivalry between the two cities. They were both in a race to see which one would be the first to build a successful underground subway system.

It all started after the great blizzard of 1888 hit the Northeast crippling all transportations for many weeks. Politicians in both cities wanted a solution similar to what London was implementing at the time. They wanted to put some of the current transportation structure underground.

After the legislative approves $5,000,000 for the project, construction began on March 28, 1895. Most of the early construction happened around Boston Commons. There were numerous delays including some issues with finding lots of unmarking graves around Central Burying Grounds. The tunnels were not as deep as the ones in London as the theory was that buildings would hold up better with tunnels not dug too deep. Boston Elevated Railway was the main company that undertook the main part of the project.

While New York wasn't the first subway system, it would be the largest. The New York legislature approved $35,000,000 for initial construction. Once the final plans were in place, construction began on March 24, 1900.

Operation of the subway began at 2:37 pm on October 27, 1904, with the opening of all stations from City Hall to 145th Street on the West Side Branch. Today the has 26 lines and 468 stations in operation; the longest line, the 8th Avenue "A" Express train, stretches more than 32 miles, from the northern tip of Manhattan to the far southeast corner of Queens.

There's a lot more to talk about the original subway rivalry. Way too much for a weekly Blog posting.

You can read a lot more detail about all the drama that took place during the rush to be the first in The Race Underground: Boston, New York, and the Incredible Rivalry That Built America's First Subway by Doug Most. 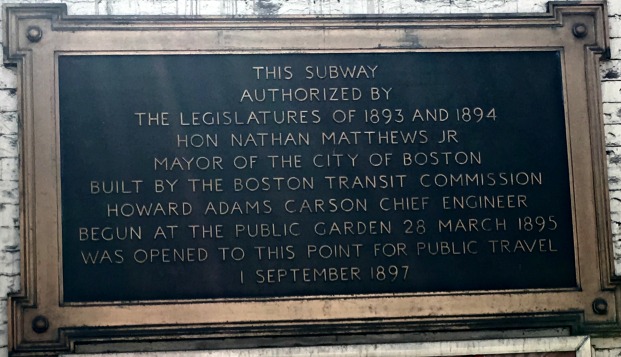