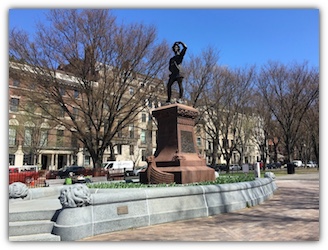 There are many monuments and statues around Commonwealth Avenue in Boston. Near the Charlesgate overpass stands a life size statue of Leif Erikson.

Many people believe that Leif Ericsson, a Norse explorer, was the first European to step on North American soil in the year 1000. This theory was made popular in 1838 when the accounts of the journey were translated into English. Once Americans learned about Leif's adventures Leif became popular.

In 1887, Boston philanthropist Eben N. Horsford commissioned the statue. According to various newspaper articles published at the time, the location was selected because that is where he believes where the keel of Erikson's ship grated on the shore of Boston's Back Bay. This was the first Leif Ericsson statue in America.

The statue was created by Anne Whitney, a notable Boston sculptor that also created a duplicate Leif Ericsson statue for Juneau Park, Milwaukee. If you look at Leif Erikson statue's left foot you can see Anne Whitney's name and date of work (1885) . Next to the name is SC - which stands for sculptor.

The statue has the following inscription on the front:

In runic letters, which were used to write various Germanic languages before the adoption of the Latin alphabet:

Leif, son of Erik the Red

On the back, which is slightly hard to read, says:

On the right side of the statue is a bronze plaque showing the Ericsson crew landing on the rocky shore.

On the left side of the statue is bronze plaque showing the crew sharing the story of the discovery.

You can find the statue on the Commonwealth Ave. Mall, near Charlesgate East. The best time to see the statue is late afternoon so you can get an unshaded picture of the statue. 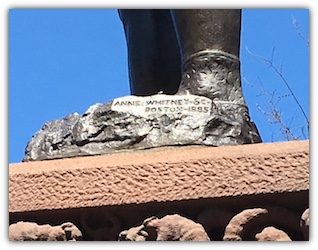