There is a weird display when viewing screen captures in older versions of OS X. For some odd reason, some of the images have alignment issues. Here are a couple of examples with the fix. (More on that later) 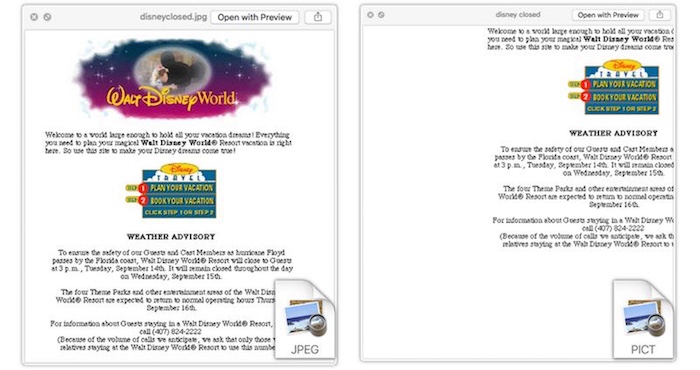 All is Not Lost

The good news is that data isn't lost and you can easily see the screen shot as it was taken, with a little bit of work.

The solution to viewing this file correctly is to open up the file in Mac OX 10.3 "Panther" or earlier. Yes you will need your old computer, you saved it right?

Once you have the file open in Preview, save the file as a JPG or PNG file format. Once the file is in a standard format it can be correctly viewed in non-legacy system.

Any filename that starts with "Pictures" followed by a number and dated earlier than 2000 will most likely encounter this problem.

If you're a long-time Macintosh user, with lots of old Picture files, you can do a file search for images that are using the PICT format in the Finder.

Why is this happening?

It turns out that Apple's original screen capture tool was using Apple QuickDraw.

Wikipedia says, "With the change to OS X and discontinuation of QuickDraw, PICT was dropped in favor of Portable Document Format (PDF) as the native metafile format, though PICT support is retained by many applications as it was so widely supported on Classic Mac OS."

In other words, it is because the screen capture was done with an old version of QuickDraw. Apple no longer supported QuickDraw after 10.3. This was an indirect result of Apple eliminating support for the "Classic environment" with 10.4 Tiger.

Did you know that QuickDraw was part of the core graphic concept of the original Macintosh Plus.