Smart Converter 2 is a good media tool to use

Shedworx's Smart Converter 2 tool is a great way to convert a media file from one format to another. It's a great quick media converter that just works well.

There are two Smart Converter versions, here's the key difference between the free version and the paid version:

In the Smart Converter Pro 2 version:

Smart Converter Pro provides a faster, higher quality conversion than every other converter: 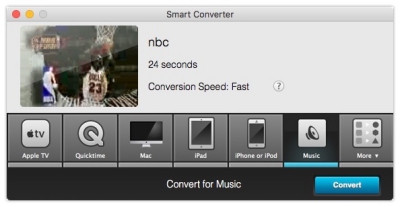 I also use Smart Converter to extract audio from MOV files. Useful when I just want the soundtrack and not have to watch the movie.

Haven't upgrade to the Pro version because I don't have the need for all the features of going pro. If you have a lot of files that need converting, then going pro is the way to go.

My Tips and Tricks

Some video screen capture files done in Snagit will not convert well. Apparently, there's a lot of masking between shots This means that you'll see some strange views in your final output.. (Not Smart Converter problem as Quicktime will have this same issue.) I have found ElMedia Player as a good converter in these cases.

Keep in mind that the final conversation is only as good as the source. Smart Converter can't make a video compress with Sorenson Codec look better in MP4.

Some mp4 files will not convert to audio-only. Haven't figured out why this is the case. ) I use Fission to extract the audio.

If you're not able to find your audio clip in iTunes it's because iTunes thinks it's a movie file.

Here are all the file formats extensions supported by either version of Smart Converter:

You can get the free version on the Apple Store or from ShedWorx Website.