The Plaster Sculptor Mold at the Boston Public Library

In 1920, Nicola Sacco and Bartolomeo Vanzetti are two Italian immigrants who were charged with murdering a payroll clerk and a guard.

Many people felt that they did not receive a fair trial. There were charges that the prosecution suppressed evidence and the judge might have some bias to their anarchist views.

Dispite large protests and request from around the world, the pair were executed on August 23, 1927, in the state prison in Charlestown.

In the Boston Public Library, there is a large plaster sculptor to remember the two men. 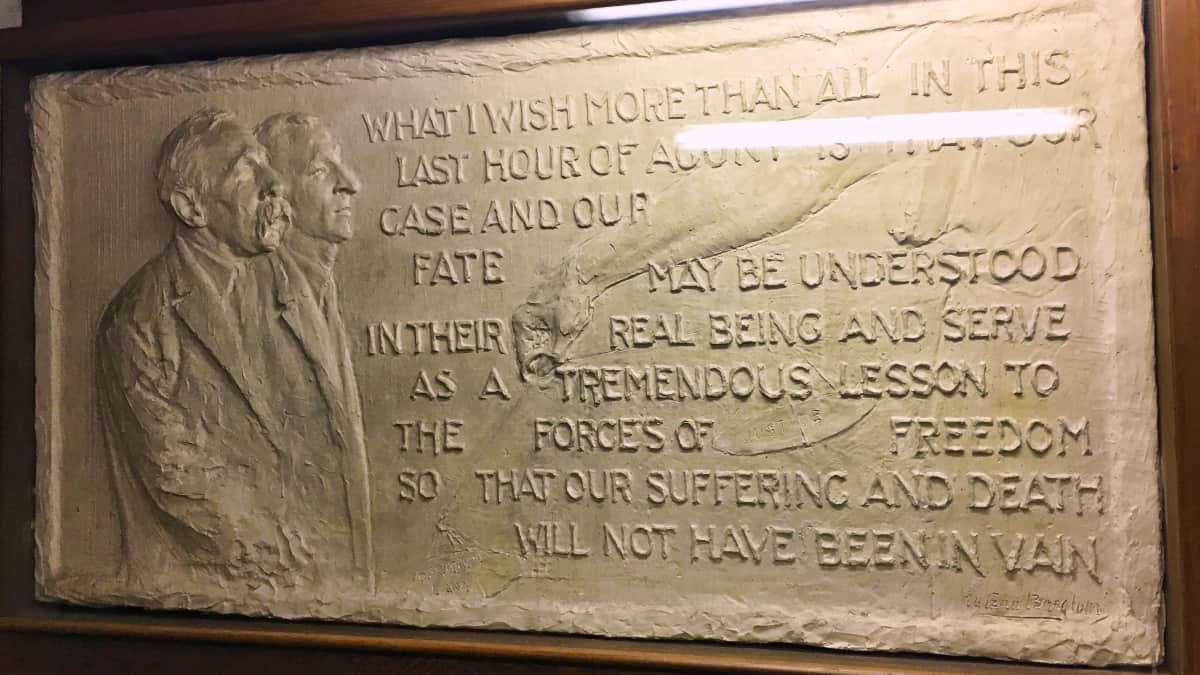 Things I Learned about the Plaster Sculptor Mold

President Calvin Coolidge denied a stay of execution for Nicola Sacco and Bartolomeo Vanzetti on the same day that he dedicated the Mount Rushmore National Memorial in Keystone, South Dakota.

Gutzon Borglum, who it is most associated with the creation of the Mount Rushmore National Memorial, was not happy with President Calvin Coolidge's decision not to stay the execution. He volunteered his time and services to create a special plaster sculptor to remember the two Italian immigrants.

A special committee tried to present the Plaster Sculptor and bronze sculpture to several Massachusetts officials in 1937, 1947 and 1957. Each time they were turned down. The politicians didn't want to be part of the Sacco-Vanzetti story.

At the 1947 request, Eleanor Roosevelt and Albert Einstein made public statements that the state display the sculpture.

In 1977, Michael Dukakis issued an official proclamation indicating that Nicola Sacco and Bartolomeo Vanzetti did not get a fair trial.

In 1997, on the 50th anniversary of the executions, Boston Mayor Tom Menino and then-acting governor Paul Cellucci formally accepted the sculpture at the Boston Public Library.

The plaster sculptor is now located next to the Wiggin Gallery and the Rare Book Room of the Boston Public Library at Copley Square.

The area of the Wiggin Gallery and Rare Bookroom is currently under construction. I have been told that the public won't have access to see the Plaster Sculptor Mold until sometime in 2021.

Three aluminum copies were made from the Plaster mold. One now hangs in the Community Church in Copley Square, another one is at the Gardner Jackson Library at Brandeis University, and a bronze can be found at the Gutzon Borglum Historical Center near Mount Rushmore.

Text on the Plaster Sculptor

The paster mold is seven feet long and three and a half feet high, it showed the men in profile next to a quote from Vanzetti's final prison letter.

What I wish more than all in this last hour of agony is that our case and our fate may be understood in their real being and serve as a tremendous lesson to the force of freedom so that our suffering and death will not have been in vain.

Trial of Sacco and Vanzetti

More informaiton about the trial and it's impact in Boston's History will be in a future blog post.