Here's some information about Tom Sawyer Island from the Explorer Map on the Island:

Mark Twain was born Samuel Clemens in 1835, in Florida, Missouri. He is up not too far away in the small town of Hannibal. From there he would raft over to islands in the Mississippi and watch as majestic steamboats paddled by. As a young man, he became a riverboat pilot, listening for the leadsman to sing out "Mark Twain" which indicated the river measure two fathoms deep, making it safe to proceed. As a writer, his two most famous creations, Tom Sawyer and Huckleberry Finn, sprang from his boyish memories of life on the Mississippi. All the names on the island can be found in the literary classic Huckleberry Finn.

Places You may encounter 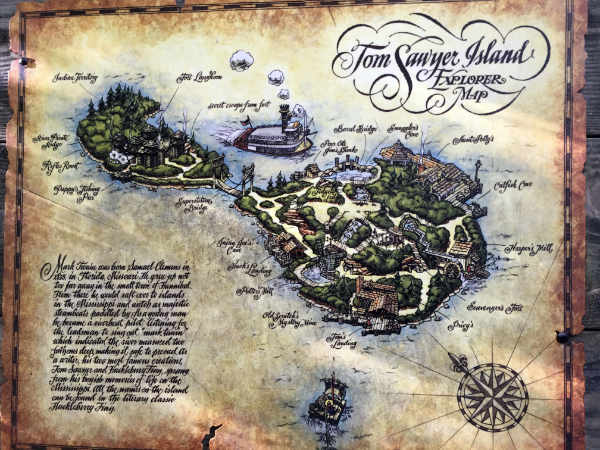 A replication of an early frontier fort. Here children can have fun exploring various features of the fort.

To get from Fort Langhorn to Aunt Polly's you should use the Barrel Bridge. This is a fun crossing where you try to keep your balance as you cross some oak barrels to get to the other side. Just be careful. You won't fall in the water as the ropes are there to keep your balance.

There is a "rest stop" between bridges. This is a great location to get pictures of the Haunted Mansion. Listen carefully you should be able to hear the howling dogs coming from the mansion.

Barrel Bridge has a one-way crossing. You are crossing correctly if the Haunted Mansion is on your left side as you cross the bridge.

There is a "the other Way" if you want to avoid the barrels.

There are three caves on the island. They are pretty dark. If someone in your party is scared of the dark, then it's best to avoid the caves. You can bring a small flashlight if you want. You don't need to use the caves to get from point A to point B. You can still get to the other side of the cave via walking.

A quick walk around the island and various caves should take about 15 minutes.