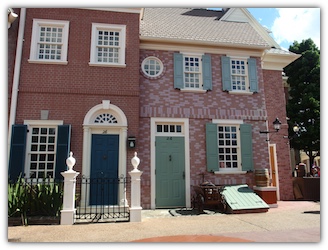 When your walking around Liberty Square Disney Imagineers wanted you to feel that you're stepping around colonial America.

Note: There were no public bathrooms in Colonial America, so you won't find any in Liberty Square. The nearest bathrooms would be on the other side of the Memento Mori, between the Haunted Mansion at It's a Small World.

Check out the shutters on the houses, they look a little off? That's intentional! In colonial America, the Minuteman would use the metal in nails for their guns. They use leather to hold the shutters and over time the leather would stretch causing the shutters to slant a little.

The Tree of Liberty

The Liberty Tree in Liberty Square is based on the famous Boston's Liberty Tree. This is where the "Son's of Liberty" would hang their hung lanterns on an evening during festival occasions. (They also hung lights on the Great Elm on the Boston Commons.)

There are 13 lights on the "Tree of Liberty" to represent the original 13 colonies.

The Liberty tree was originally located on the outer perimeter of the Walt Disney World property. It was moved by digging it out and then drilling horizontal holes through it so steel rods could be inserted and attached to a crane.

The tree that moved was a 35-ton 135-year-old oak tree. Today the tree is 180 years old. The tree was planted in sometime in 1836. This was right around the time of the first Seminole War.

You can find all the flags from the original 13 colonies next to the tree.

Disney has removed the Georgia flag from its "Liberty Flag Plaza" (Where they display the flags from the 13 original colonies) and have replaced it with the "Don't Tread on Me" Colonial Flag. Perhaps it had something to do with the fact that the Georgia flag contains the Confederate Battle Flag.

Thirteen proud and colorful flags fly high today to honor the original states which became our country first constitution. A replica of the first national flag used in 1787 symbolizes the joining of the states to form our first union.

Right in the middle of Liberty Square is a replica of The Liberty Bell. If you reach into the bell and swing the clapper, the bell rings very LOUD!

Some Liberty Square sites claim that the Disney's Liberty Bell is from 1976 when every state got a replica copy, and Disney got Pennsylvania. However, if you read the inscription at the site, you'll discover that the bell didn't appear in Liberty Square until 1989.

Around the corner to the left of the front entrance to the Hall of Presidents, is a small worn marble step. That step is actually from Monticello (Thomas Jefferson's house). There was a plaque identifying the piece at the upper right, but now only its frame remains. The identifying information has been removed.