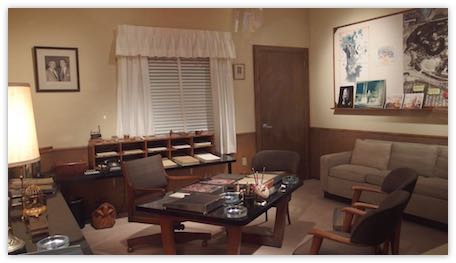 One of my favorite things that I like see at Disney World Hollywood Studios is the "One Man, One Dream" in particular I like looking at the working office Walt Disney once used.

The office looks exactly the same way as he last left it. Visitors have a time capsule view of what a CEO office looked like in the 1960s. You can see all sorts of pictures and things that inspired the great imagineer.

The whole "One Man's Dream" came about as part of the "100 Years of Magic" which started on October 1st, 2001. It took guests on a journey through the life of Disney, who was born on December 5, 1901, and included rare artifacts.

Other exhibits at the One Man's Dream include:

Due to expansion at Hollywood Studios, the "One Man, One Dream" has been closed. This is make room for additional attractions for the Toy Story Land.

The desk has been moved to the Walk Disney family museum in San Francisco:

I can't wait to go back to San Francisco to see the desk to see how well they put everything back in the same place.

"You never know where going until you know where you been. " - English Proverb/Old Saying